We woke up refreshed and ready to go… after showers and getting our bearings we called a UberX and waited in the lobby of our hotel. This is a really nice hotel, but it’s about 10 miles away from where we want to go, so prices are around $40 (give or take) to and from the hotel. We had decided that we’ll not go to and fro and to and fro… we’ll just go into town, do all our stuff, and when we are done come home. That will keep costs down a little.

The UberX got cancelled (who does that? The driver or Uber??) so we got another one… that cancelled. Then we decided to go across the street to Jack’s Casino… maybe the Uber drivers knew that landmark instead of our hotel… and we got another UberX. This time Franz (not Hanz) with the black Mercedes came. Ellie does all the ubering and this time I hadn’t asked his name. When we got in the car I said “what’s your name? “You know my name,” he replied. No, no I don’t.

Turns out Franz was really nice, with the best English of all our drivers. He was also the oldest (last night the guy must have been about 20… Franz was probably in his fifties). He had lived in Amsterdam his whole life (the others were immigrants, I think)… which meant he could make a great breakfast recommendation. Not expensive, and not touristy, we requested.

The plan for today was to go into town and see stuff. We saw the Van Gogh Museum, which was expensive enough to make us question our plans to go to the other museums and walk around and look at paintings for about $20 each. Don’t get me (too) wrong… that’s cool and all, but we want to experience Amsterdam… the sights, the smells, the sounds (so many languages!), the culture, etc. So instead of scheduling in another museum, we decided to try to go to the Anne Frank House, which we could only do after three, if we stood in line to get tickets (since we didn’t get tickets weeks ago). We figured we’d have a shot, so why not hang out in that neighborhood until three? (we had no chance to go there, the lines where very, very long, and they weren’t hardly moving).

So we walked around this area, until it was time to go home (probably from around 10am to 7pm): 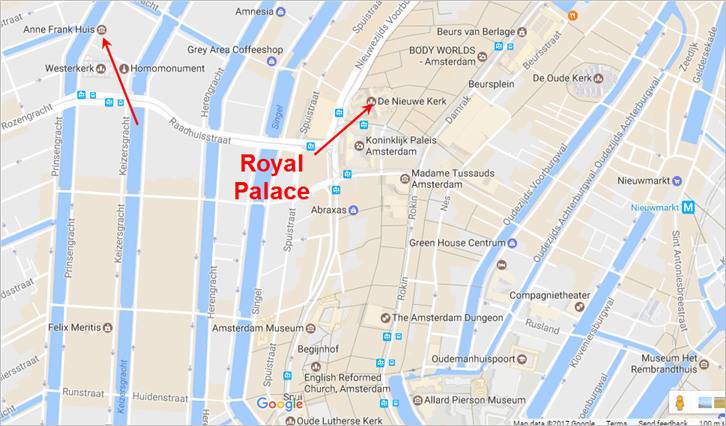 Franz delivered on his restaurant recommendation… he dropped us off at the corner by “the church” by the Anne Frank House and pointed to an unassuming restaurant, and said to go there. We spent at least an hour there (eating is a leisurely thing, apparently), and ordered various foods to share. I got “krotons,” or on the internet, bitterballens. Not sure how to describe them but they are best eaten with lots of mustard, and fortunately, I didn’t have to share with anyone :p Ellie got the most amazing (it was so good) chicken soup we’ve ever had, Sam got a pancake (that is a breakfast, lunch, and dinner thing here), and William got an omelette (also seems to be on every menu). All of this was sooooo good, and it wasn’t just because we were hungry. 40 euros later and we were ready to head out for the day.

Sam’s strawberry pancakes. If you say “camera” she will strike a pose. As will Ellie, and William. I’m travelling with models. 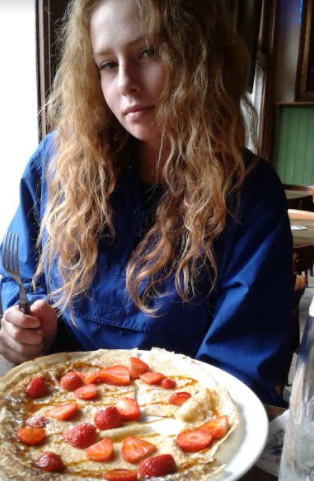 This was our first pass at the Anne Frank House, and it was telling. The line wrapped around a corner or two… and it was early in the day. We decided to walk around and ended up at a “cheese museum,” which was just a cheese store with a little museum on the bottom level. It was fun enough, with samples, and we spent almost an hour there. 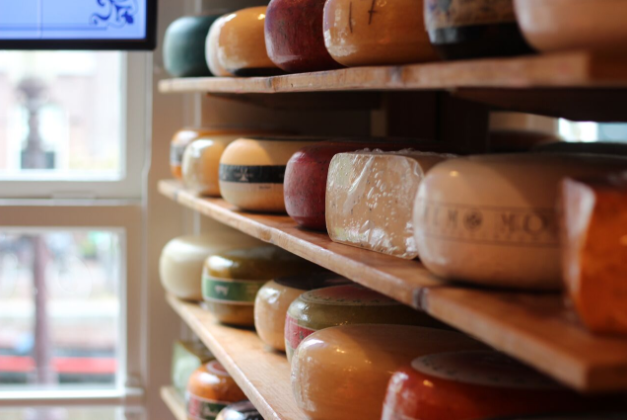 Here are some colorful cheeses… the blue is pesto. I can’t remember what the pink cheese is made from: 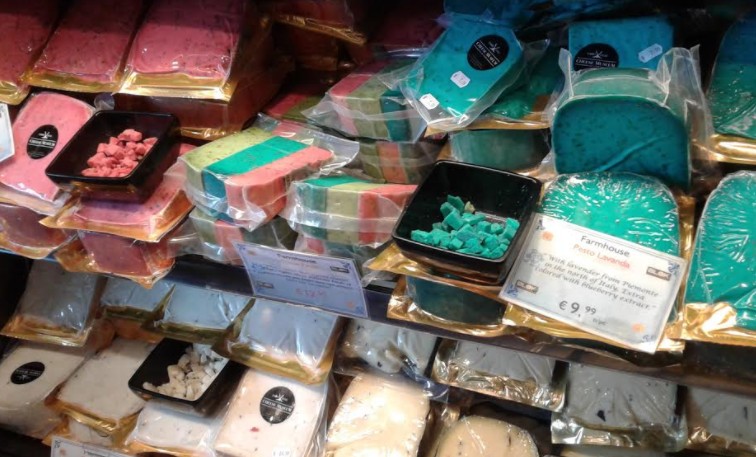 We really had nowhere to go until three, when we could have a chance of getting standby tickets to the Anne Frank House, so we just wandered around… Sam and Ellie found a Yoga store and me and William went inside a tool store (there were antique tools in the window, so I thought it would be interesting, but inside it was just a neighborhood tool store. It was interesting to see the different tools, though they were modern), and I thought it was kind of a weird place for a tool store.

Ellie’s sister had recommended an amazing cheese store, where she had bought a bunch of cheese a week or two earlier… so we walked a while down the road, through allies, across bridges, etc., stopping here and there, and soaking it all in, until we got to that store. It wasn’t as good as the Cheese Museum, but it was a fun walk through the town. We were close to the Central Station, which was huge and very active, and maybe had a bathroom (aka toilet) we could use… which it did, of course. For .50 euros. Here’s a view from within Central Station, where the platform is for the trains: 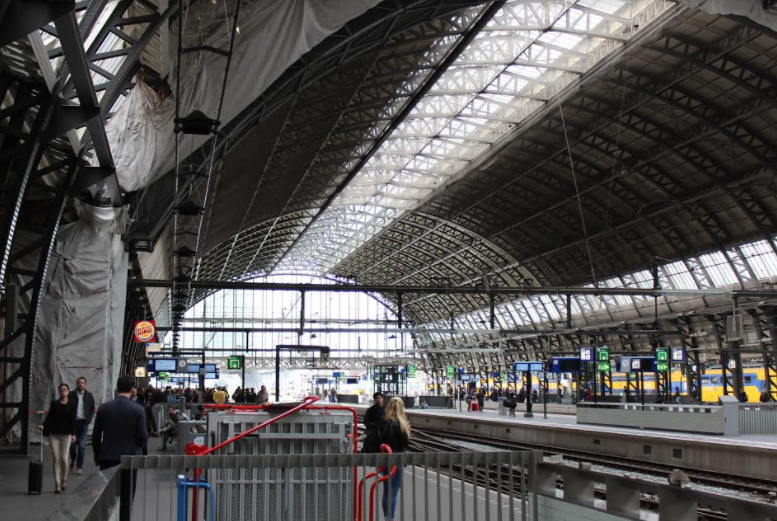 I don’t like paying for the bathroom so we left… we went towards the Anne Frank House, but stopped at a plaza where there was a guy in a Yoda mask (the rest of him was painted gold), floating in air. That was stupefying to William… although within 20 minutes we had all figured out how he was sitting with nothing holding him up :p. There were other performers, like an old man sitting in his chair playing a very old xylophone, and apparently Ellie loves the xylophone… so she tipped him, got a picture with him, and even got to play it. 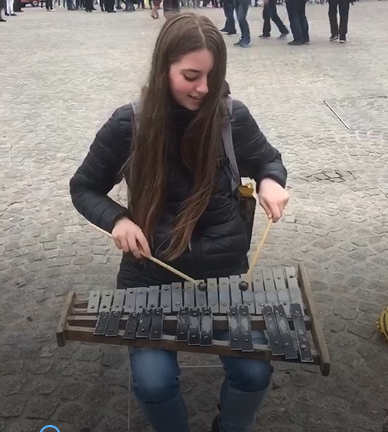 There were a couple of creepy “grim reapers” there waiting to get a selfie with you… a good reminder of the other side of Amsterdam (where apparently everything is legal). We rested for a bit (my foot was ready for a break), and then as we were leaving to take a picture of the super old statues across the street, saw the grand finale of a street performer who was going to do 20+ revolutions of head spinning… the audience was not into it, but he did a good job trying to get them to clap and cheer and stuff. Poor guy… he needed a better audience.

There were also some Chinese people doing some kind of very slow yoga/dance/exercise, and so we joined in with them (behind them). It felt very good to do… an Amsterdam local who was with them came up to us to ask us to sign a petition going to the U.N. about organ harvesting in China – apparently anyone who practices this spirituality (not religion) in China is subject to the state to have their organs harvested for the back market. Yuck and bleh… that was a sobering thought. We signed it, and I asked him what the buildings around us were… apparently, the one was the Royal Palace. “Does the King live here?” No, he only comes twice a year to stand on the balcony and wave at people.

We made our way back to the Anne Frank House… the line seemed longer now, and still wasn’t moving. We decided to do a canal ride (18 euros each) for an hour… it was a good idea but my sleepy jet lagged companions had a hard time seeing much… it was starting to hit us. It was still interesting, although I think the tour company could have done a better job with their audio (too many pauses). Notice the no parking sign on the canal wall… The houseboats have a lot of personality. I think there are about 2,500 houseboats here… here are three totally different designs: 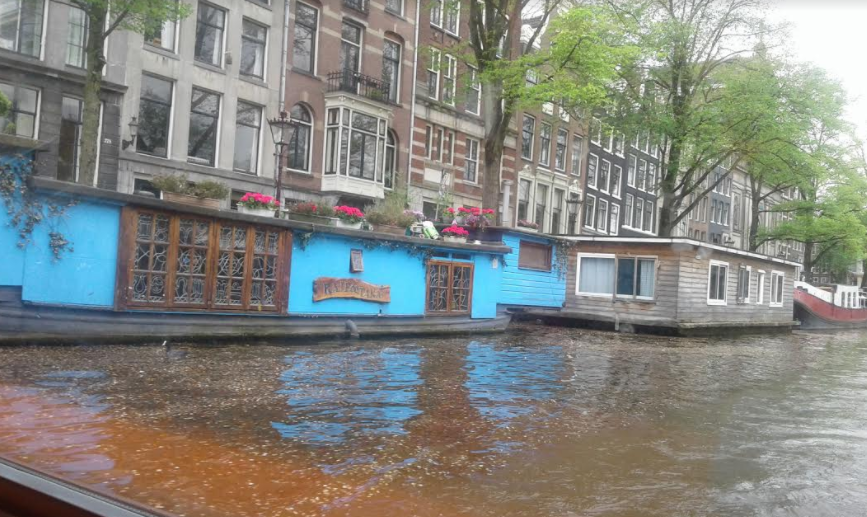 When we were done we were all anxious to find a bathroom… so we set off for a 30 minute walk to the Avacado restaurant. Although, that didn’t work… within a few minutes Ellie and Sam had ducked into the Pancakes house. I guess the call for the avocados wasn’t that good, because they were like “maybe there’s a bathroom here!” So, pancakes for dinner (mine was bacon and apples. Yep.). While they charged for the bathroom, they did let us use it for free since we were customers. Turns out our pancakes were worth 60 euros. I was craving a hamburger or meat or something, and the bacon+apple cooked into the pancake just didn’t do it. And the price was just salt in the wound.

After getting fed and bathroomed we walked to a grocery store, outside of the tourist area, and spent a while shopping for snacks and stuff (this restaurant stuff was good, but too expensive!), then we got an uber back to the hotel by 8pm.

Were we going to dance and hang out and swim? Nope… we got in and all crashed pretty hard… I guess that’s what walking around all day + jetlag does to a bunch of tourists.

All in all, a great day in Amsterdam, soaking it all in. Speaking of soaked, it looked like it was going to rain, but the weather was amazing and awesome all day.

Stopped in a pastry shop and got this beautiful creature. It looked great, but the waffle underneath was hard as a rock, and broke more than one of our plastic forks :p This guy was about three stories up on scaffolding (all of the scaffolding is decorated with brightly colored material to make even construction attractive. Sam was taking some pictures of him working and he stuck his tongue out and yelled something about him not being pretty enough to take a picture of. It was charming :p William is getting to know and enjoy his camera… what a great trip for that! 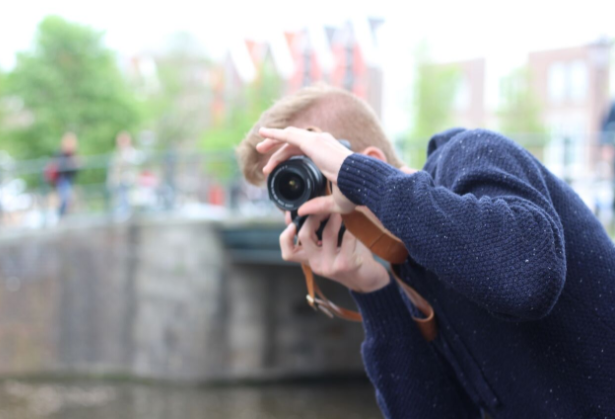 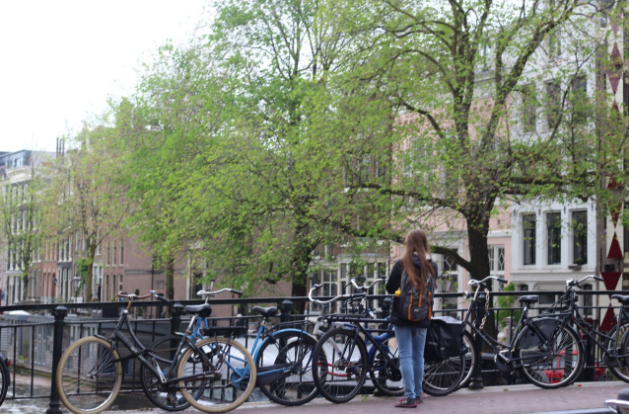 Not the only boat with a sad story in the canals of Amsterdam: 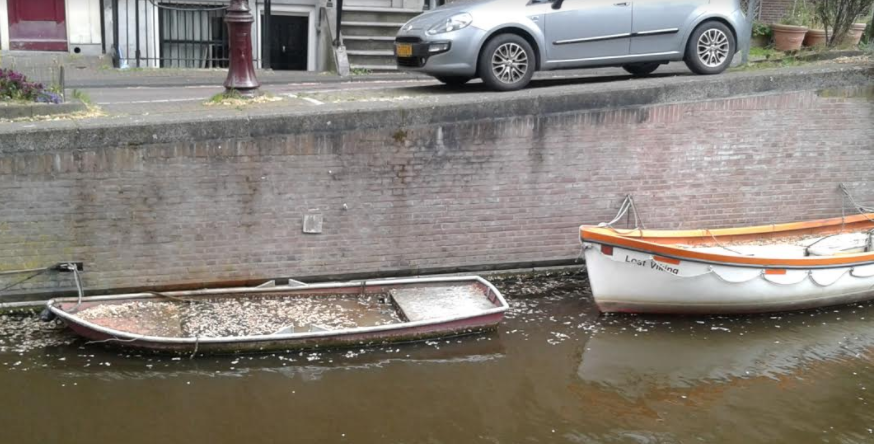 This was taken from the canal tour… this is the bike commuter parking lot. It was HUGE: 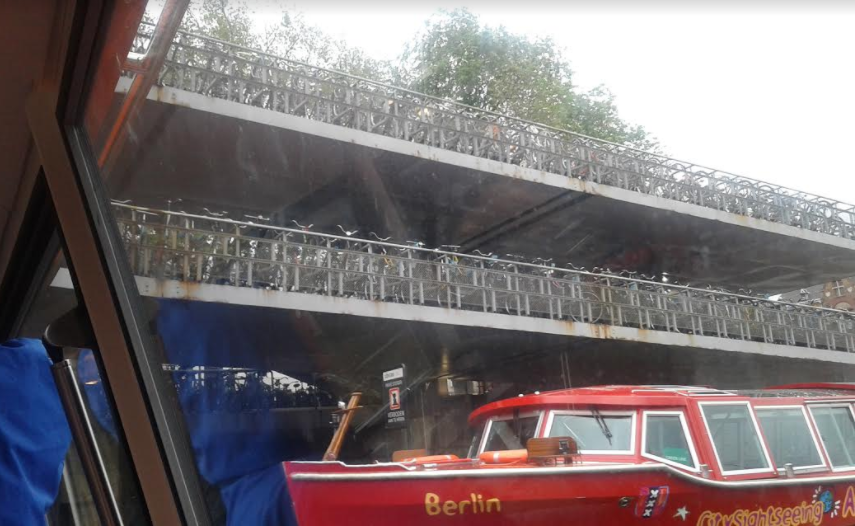 If I lived here, I would get a red bike. Easy to find… I’m posting this picture for Ellie’s mom (without Ellie’s permission ;)) These tiny cars cracked us up: