At the SLC airport, going up the escalator to go through security: 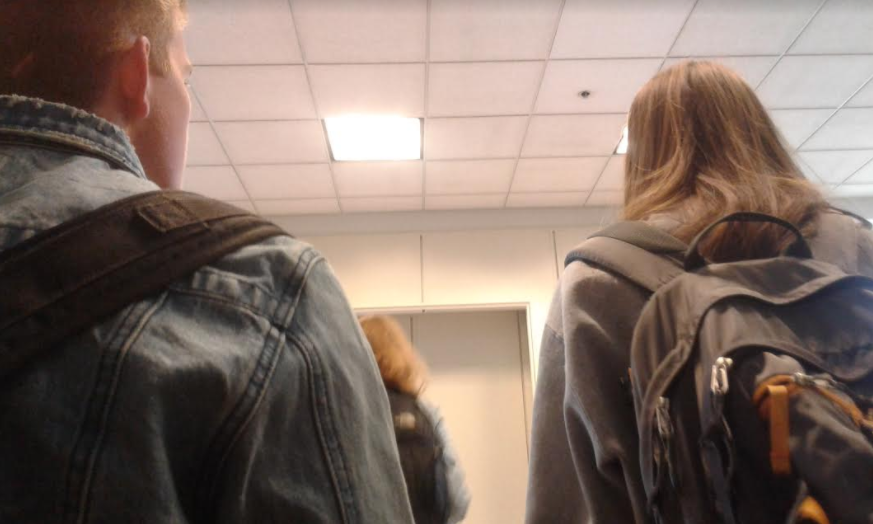 This morning at 8am we got into the Amsterdam airport, after sitting on our plane for 10 hours. It was a good-sized plane, but the seats are so small for anyone over 5’6″ that there is just no good way of sleeping… which is what you are supposed to do on this kind of flight. 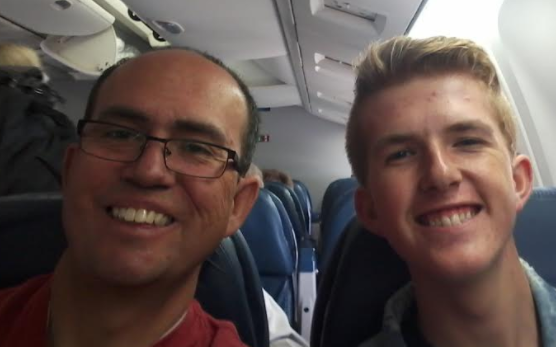 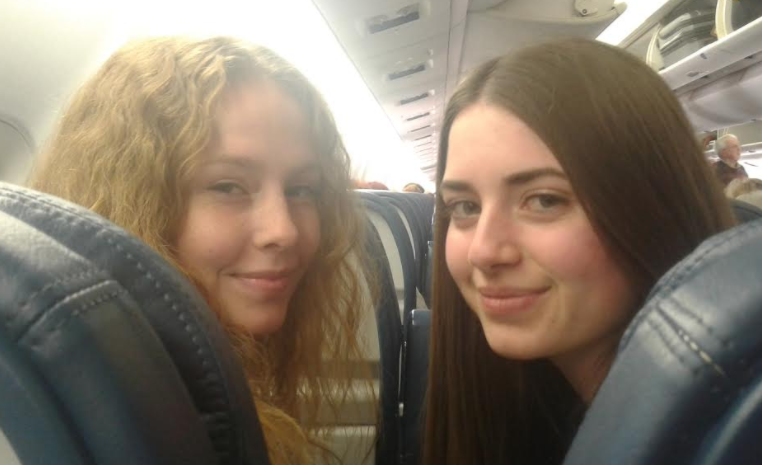 Let me back up… we got the the airport around 11:30am, and got on our plane at about 2pm… then we were airborne around 2:30, on Wednesday (in Utah). The flight was ten hours, and we’d land in Amsterdam at 8am local time. Supposedly what you do is sleep on the plane, then DO NOT sleep during the day in Amsterdam, and this helps your brain and body get used to the new timezone.

I got about three hours of sleep on the plane… first a two hour nap, then a one hour nap. Long story short, by 2pm Amsterdam time, we found a library, went upstairs to the kids section, and crashed. Resting our bodies on the tables, napping-not-napping, we finally decided to call an UberX and get to the hotel for a one hour nap. Which turned out to be a four or five hour nap. Oh well… we’ll acclimate over the next few days, right?

So, back to the airport. We went down the plane steps and walked to a bus, then took a few minutes ride to the terminal, where we got our bags (rather quickly), and commented on the garbage bins for “meat, milk, and milk products.” These were for people flying in from other countries to dump, and not bring in to Netherlands. We figured those could get pretty rank! Before we left one lady was quickly going by them and almost knocked one over with her luggage.

We got our bags, and went through the passport check very, very fast, and went up to get our first UberX ride. 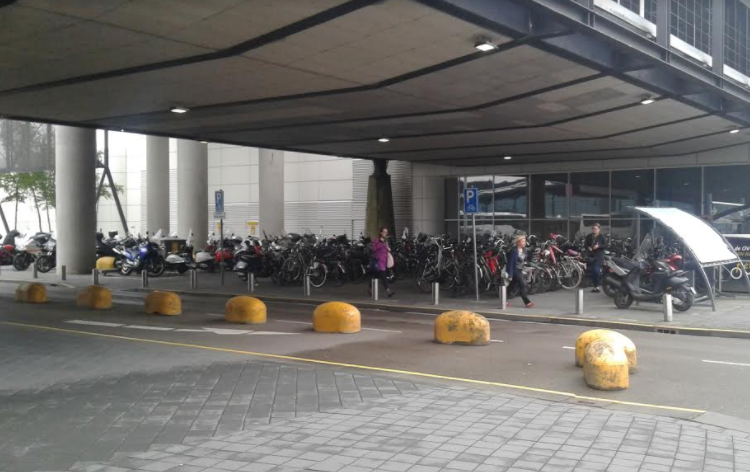 bike parking at the Airport…

This was a great experience, except that we were at the arrivals level, and the UberX guy was one level above us, at the departures… once we figured that out, we hustled up and found him. X means eXtra large… but this was a Toyota Prius. Fortunately we all packed really tight, and were able to get four people (plus the driver) plus all our luggage (one bag + one carry on) in the little Prius. The driver was cool, but didn’t speak much English. We had a nice 15 minute ride to our hotel (which was about $25).

We got to our hotel around 9am… maybe 9:30… and hoped we could either check in (in the U.S. they rarely let you check in that early), or leave our luggage behind the desk so we could go downtown… another UberX ($30).

NOTE: We are at a hotel+casino, in the middle of flower fields (no flowers in bloom), and nothing else around. Great for the casino because there is no other place to go, wander to, spend money, etc. Bad for us because we either eat the $15-$20/person meals, or we get a $30 uberX into town.

Fortunately, they had a room ready for us so we could check in and then get our UberX to go to the Museum District. Here is the travelling trio pretending that we aren’t tired (this was within five minutes of getting to the hotel): 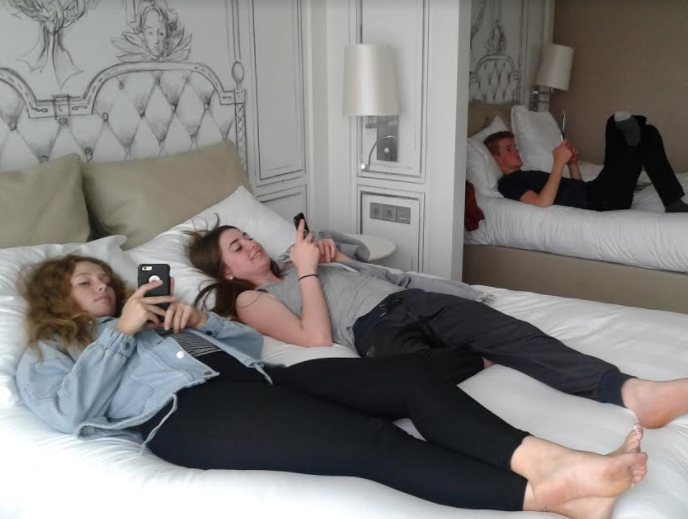 The four places we had planned to go were: The Van Gogh Museum, the Rijksmuseum, the Anne Frank House, and the “flower market.” And a few other places, but those were the highlights.

We got dropped off by “Sherif,” our second UberX driver, who was really nice and had a sweet Mercedes, and found our way to a place to buy tickets. That only set us back 60 euros… after a few minutes of looking around, I had to go back and ask “um, where is this museum?” We felt quite disoriented.

Finally, made our way in, which was in a big glass building, down a huge escalator (now we are underground), then over to the museum, which was four floors. Lots of painting from Van Gogh, who apparently didn’t cut his ear off (but makes for a good story), and his mentors/colleagues. Van Gogh apparently got started in Amsterdam but eventually moved to southern France (we’ll be around there in a few weeks).

It was cool, as far as painting museums go. There were a ton of people there… Amsterdam is clearly a tourist destination.

From there, we decided to get some food. It must have been close to noon… so we got a recommendation to a hotel a block away, but when we got there the outside menu showed that anything we would want was at least fifteen euros… just a bit more than we wanted to spend. So, let’s walk down the road a bit 🙂 We went a number of blocks, which started to feel like forever, since our bodies were sluggish, and “I feel like my body is melting” (direct quote from Ellie), and our minds were loopy. 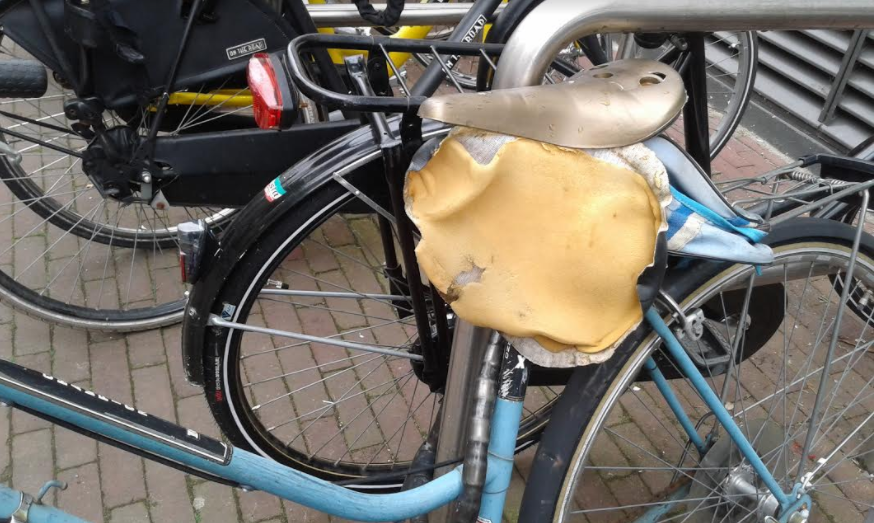 We pass restaurant after restaurant… they all seemed overpriced for what they were offering… and finally found a cute little pastry shop that looked fun to go in. Fun led to holy cow amazing, and oh-by-the-way they have things like sandwiches for four euros, quiche and pizza for $2.50, and immediately we’re like “this is our lunch place.” It was awesome, affordable, and a super cool environment. 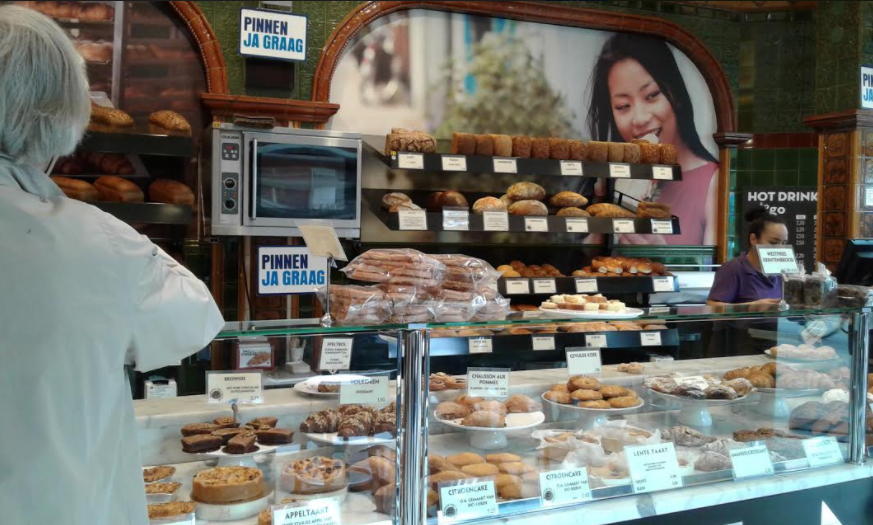 After a delightful lunch we walked another block to the end of the road (well, intersection for four other roads) and went into a Openbare Bibliotheek, which seems like it might be a library (yes, it was). In Spanish, biblioteca is library… so I figured “open” + bibliot____ might be library. Turns out, it was. We went up one level, which was the kids section, and promptly found some seats and rested our heads on the tables (which kind of looked like resting our heads on the food tray on the plane).

This is the front of the library… I took this because the stoplight is actually just for bikes (a bike stoplight… whuh?????). Can’t see it very well, but it’s there. 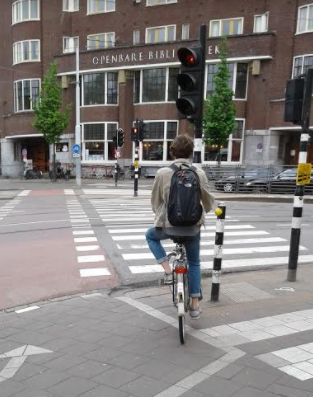 It was obvious we were mentally and physically weird, and even though we hoped to stay up for at least six hours more, we decided to get our last uberX of the day and go take a “one hour nap.” This is where we waited for the Uber, across the street and down the road from the library… a quiet street. 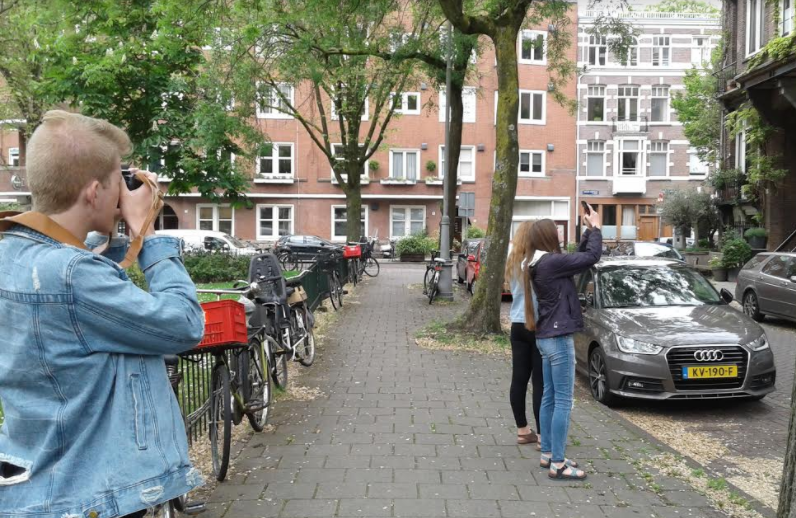 I love being here with my shutterbugs!

William and I went to explore the hotel and look for food (across the parking lot at the casino), and decided to probably eat all our meals at small cafes (which means UberX into town)… see a theme here? Too many Ubers. Next time our hotels need to be within walking distance to stuff (public transportation + neighborhoods). We found the hotel pool, exercise room, a map that showed how to get to the canals (about a kilometer away… we should explore that soon), and then the casino building (two restaurants, one cafeteria style, one deli, a KFC and a Home of the Whopper Burger King). Darn.

We got back to our room and Ellie had showered (although she couldn’t figure out how to turn the water off of our very sophisticated shower system: to the right is the top showerhead, to the left is the side showerhead), so there was a bit of a panic there…

And now I’m writing this, grabbing pics, and Sam, William and Ellie have spent an hour learning a dance routine. Fun 🙂 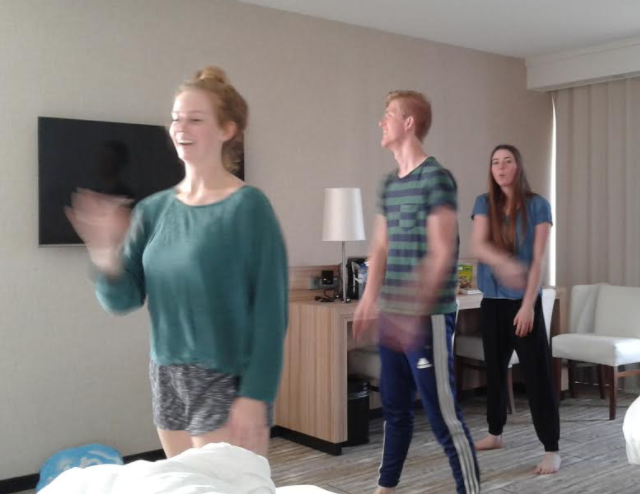 Hopefully we’ll be in bed in a couple of hours and start to get our schedules straightened out.