After a couple of days in Amsterdam we decided to do some other stuff… so off we went to the “second biggest bazaar in Holland: De Bazaar. I saw info about it in one of the tourist magazines and it looked fun, and cultural, and big… so we got an uber from so far the funniest uber driver (not married, no kids, no girlfriend, and 24 years old, from Morocco… he had a delightful laugh, and was quick to laugh). He leases his Mercedes for about $2,000 a month (wowzers!!) to drive for Uber.

De Bazaar apparently started out as a black market, and today is a huge Middle and Far East market full of, as our Uber driver said, cheap Chinese knockoffs. But hey, we didn’t go for the merchandise, we went for the experience. And even though the driver said we’d only be in there for thirty minutes, we lasted a few hours 🙂

After passing the horsey ride (appealing to kids everywhere!) 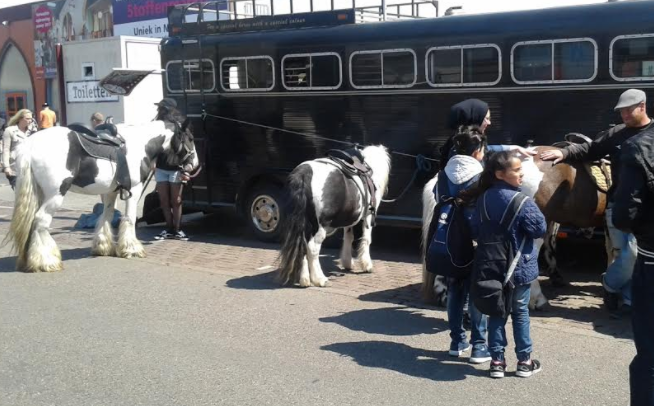 We went into the food market, where there were fruit stands and olive stands and baclava stands and nut stands and date stands and veggie stands… it was very colorful, and the smells were awesome, and the samples were amazing… we swore we would get some mangoes to bring back to the hotel but when it was time to leave we were too focused on where to meat our uber and we forgot… oops! Sam said the mangoes were way better than in the Dominican Republic (she got home just a couple of weeks ago)… but we were all starving, so any mango would have been good :> 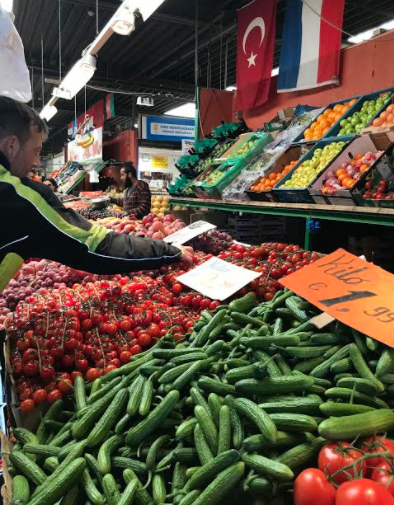 My thoughts on the fruit stands: why can’t my local grocery store have fruits and veggies that look this amazing?

Here’s a nut stand (also, the place with the credit card machine, which didn’t work for us): 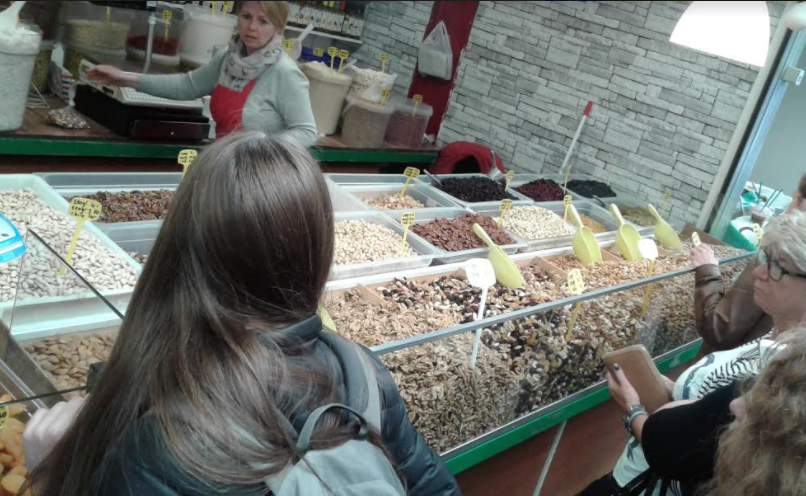 I loved hearing the fruit merchants shouting to customers, vying for attention, each yelling louder than the other. It reminded me of being in Istanbul (although the vendors were not as aggressive as the rug merchants in Istanbul). This was part of the bazaar experience that I was looking for!

The girls somehow immediately found a shoe vendor and got sucked right in. They found THE RIGHT shoes for twenty euros each (what a sweet deal, even though a few booths over the same pairs were selling for eight euros each). They love their shoes and have taken about fifty pictures (no kidding) of their shoes with different backgrounds, supposedly that will become an instagram page (shoesInEurope?).

After the great shoe purchase, it was time to eat… what do you choose in a place this big with so many choices? We went to this place that had “Turkish pizzas.” I never heard about these in Turkey, but wow, they were amazing. For 1.5 euros you get the pizza bread/wrap, and then they put in all the veggies (iceberg lettuce, cucumbers, carrots, red onions, tomatoes, pickles jalapenos (chilies), and a choice of red sauce or white garlic mayonnaise). William said “hey look, it’s a turkish Subway!” That’s what it looked like… but the taste? AMAZING! William opted to spend two extra euros to add shredded kabob meat. 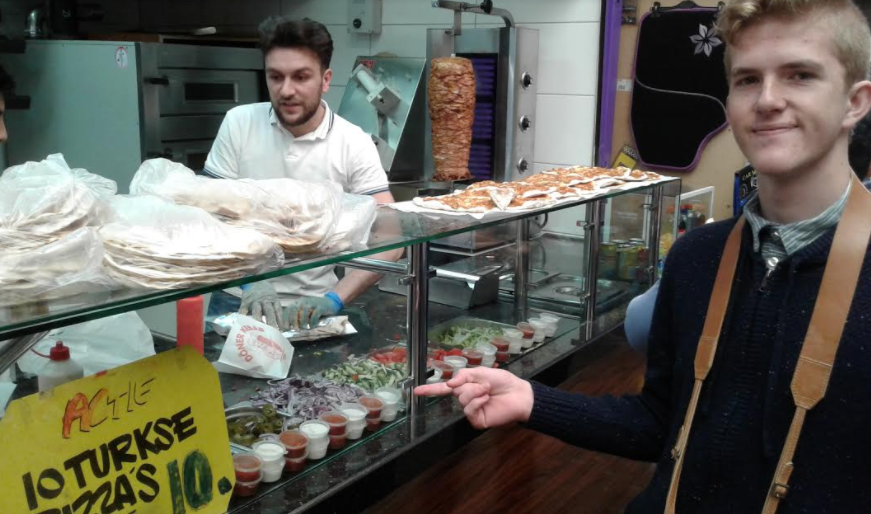 Note the pizza crusts piled on one another on the right of the counter… I thought they were selling just those (without anything in them). Also note the kabob on the right, and the oven to reheat your pizza bread before they fill it with veggies.

Here’s one all rolled up… it was SOOO GOOD. I want to make these at home one night. 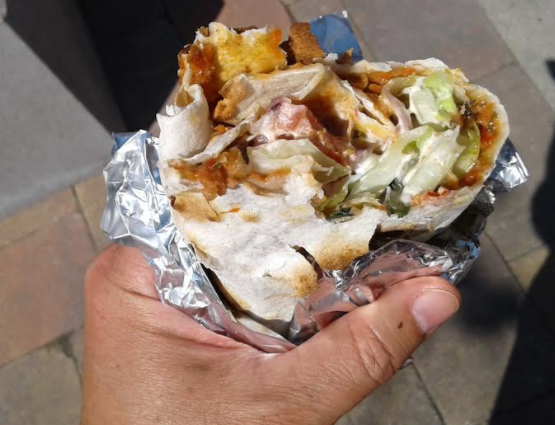 After eating we walked around and found that many of the vendors started looking the same… some impressions:

Here are some shirt size options that even I can get into :p 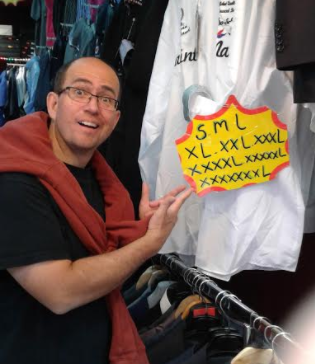 These fashionable pants that are supposedly selling in the US for $400+ are only 275 euros at de bazaar! Seriously,
who comes up with this stuff? 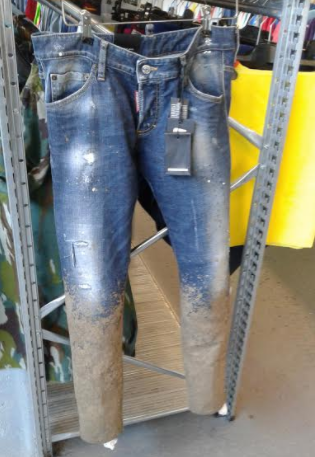 Eventually we been there, done that, and it was time to go. But not without getting churros. Really Sam, churros? This is The Netherlands, not Taco Bell! But the churros were super fresh… we watched them squeeze the batter through a mold and fry them right there. Freshest churros I’ve ever had, and you seasoned them yourself. Okay, it was worth it 🙂

This is the churro maker… yum! 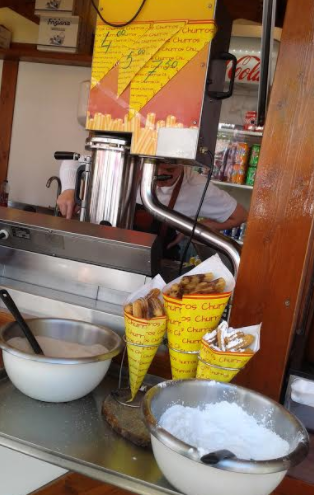 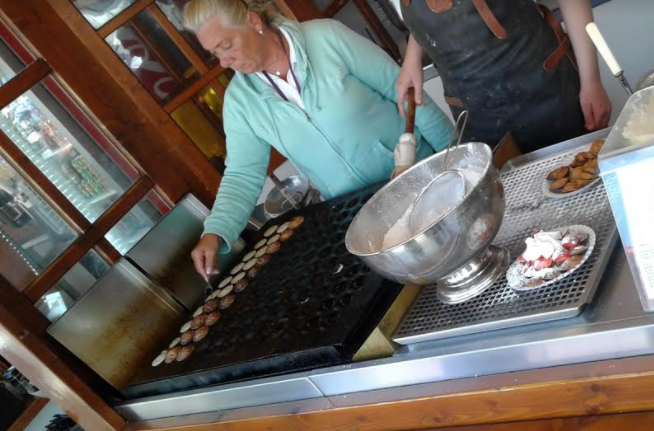 The next Uber driver was from Morocco (seems like they all are, except Franz from The Netherlands). He came here many years ago to study Spanish Literature, and while his English was good enough to communicate, he was more comfortable speaking in Spanish… so I got a treat for the next thirty or forty minutes as went from De Bazaar to the huge flower garden, the Keukenhof (or as I called it, the flower petting zoo), which was like a huge flower garden that you could stroll through. 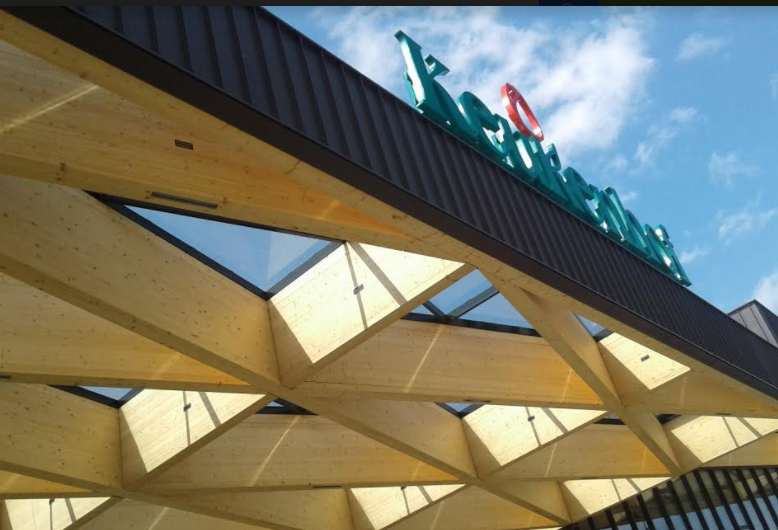 Bad angle for the sign but very cool ceiling design.

It was sixteen euros for each person, but it was really quite peaceful (especially after spending a couple of days in crazy busy Amsterdam). Everyone was taking pictures all over the place… the only problem was that we came at the end of the tulips cycle, so some sections were already cut down while others had nearly dead flowers. Overall, it was still very beautiful, and like I said, peaceful. I heard more American English here than anywhere else, so far. They had a lot of stuff for kids, including a zipline, a little petting zoo with goats, rabbits, ducks, chickens, and a peacock, and even an authentic windmill that we got to go inside and climb up to the top.

Interestingly, the flower stands on the streets in Amsterdam were so fragrant… I went in just to catch the smells, but I didn’t get any bit of fragrance at the Keukenhof.

Here’s a cool chess set… I bet I can make this in my backyard: 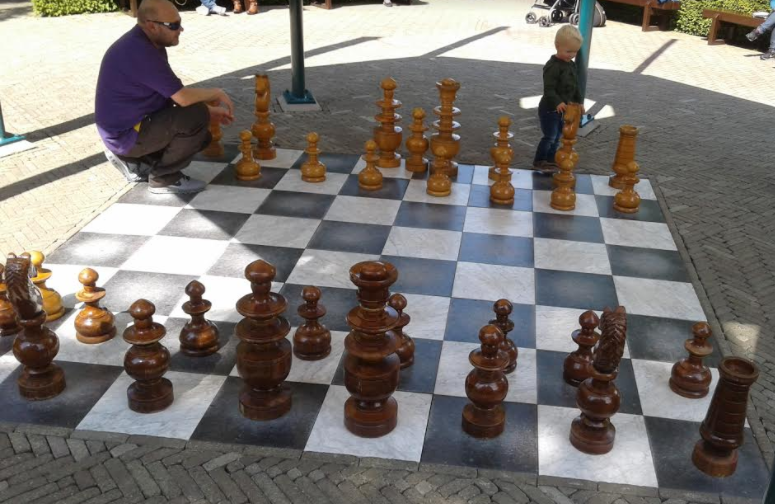 The flowers were beautiful, of course. Some of these bulbs were the size of a softball! When we were done we caught our last uber and headed home, which was just ten or so kilometers. Once again, we were in bed around nineish… and out pretty fast. The plan was to go to Cologne, Germany, but that didn’t happen. More on that in tomorrow’s post 🙂

Each time you bring up Google, this is what you get:

This little coffee stirrer is what we use to make our PB&J sandwiches. It is super flimsy but better than nothing :p The hotel doesn’t have plastic spoons. here’s our twenty euro spread from the grocery store… I bet you can figure out what everything there is: When I’m wealthy with nothing to do I want to travel the world and take pictures of trees and their bark. I thought these tree trunks were really cool: