Today went to the amazing, beautiful, full-of-symbolism Sagrada Familia. We walked .8 miles to the train (we dearly miss the flexibility of the rental car!) and got on the train to go about five stops east. Wondering what this looks like? You are in luck… I have two pictures. The first is the Trio waiting for the train: 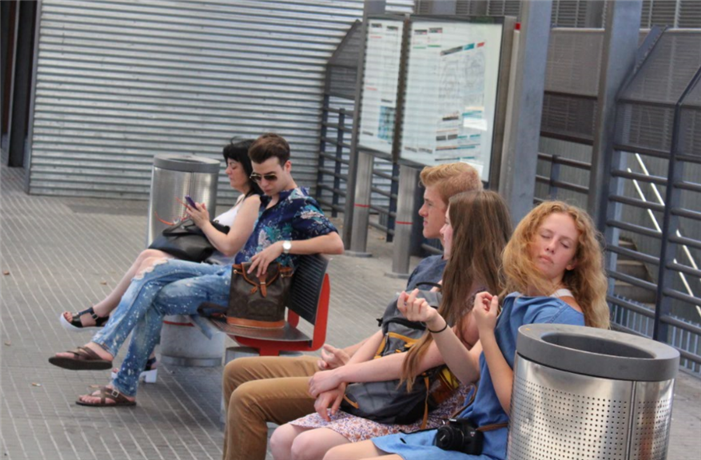 The second is of the stops we were at… we found it’s a good idea to grab pictures of the stops so we know how to get back home :p Notice the “sortida” signs… that means exit in Catalan. We’ve noticed that in Europe they are REALLY BIG on making it clear where the exits are. 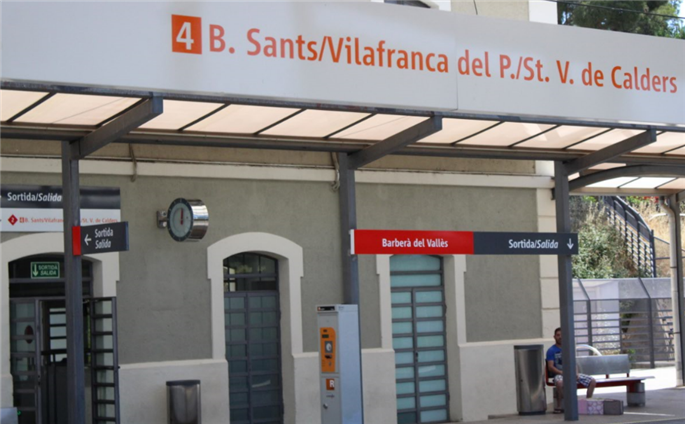 Here’s the stairs we go down after the .8 mile walk. The escalator is just for decoration… I’m not sure if it has worked all year :p 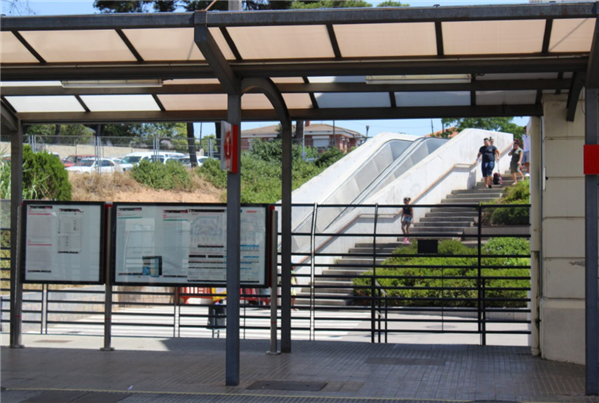 The train is so slow compared to the metro, but it’s really nice to have. We switched from the train to the metro, went three stops down, and then got off. This was MUCH nicer than the first day doing this, to the Barceloneta beach, which seemed to take forever and included two metro switches and a lot of walking through the metro maze!

We get out of the metro, go up the stairs, and I say “Um, now were do we go? I didn’t write this part down!” William and Sam both looked around for two seconds and started to laugh, but Ellie was on her phone pulling up Google Maps… that is, until they both pointed to the HUGE cathedral right in front of us, across the street. This is a landmark that you can’t miss 🙂 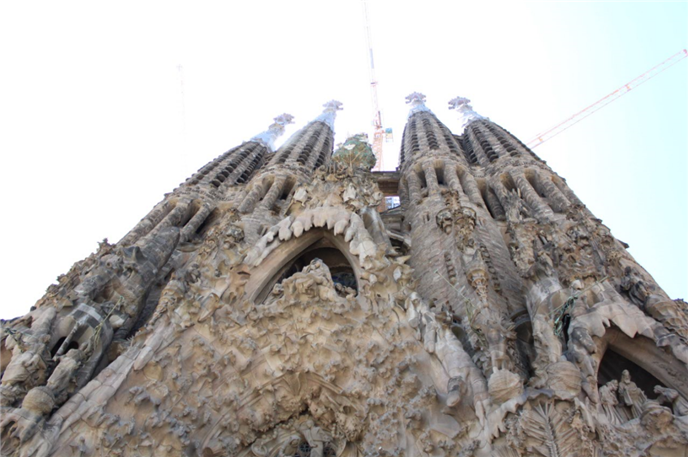 We had about an hour or so before we had to be at the gate with our tickets… which were for a certain time. So we looked for food and found a restaurant that served different kinds of paella, including chicken-only (no seafood) and vegetarian. We chose this place and had our best paella experience. It was really quite good.

After we finished we headed over to the line… there were not any long lines, which was surprising. People said that if we didn’t get tickets online we would have to wait for hours. Not today, apparently. We go through security and I get our four audio guides (which are little recorders that you use to say “I’m at #1, tell me about this place.” We’ve learned that the audio guides are usually worth the few extra bucks to learn more about the place you are visiting.

Here was a cool bonus… right outside of the line area was a stage set up for festivities. When we got there, there were four young (10ish?) girls dancing some Spanish dance… and by the time we got through the line there were some six or seven older guitar players and about ten adults dancing Spanish folk dances…. very cool! 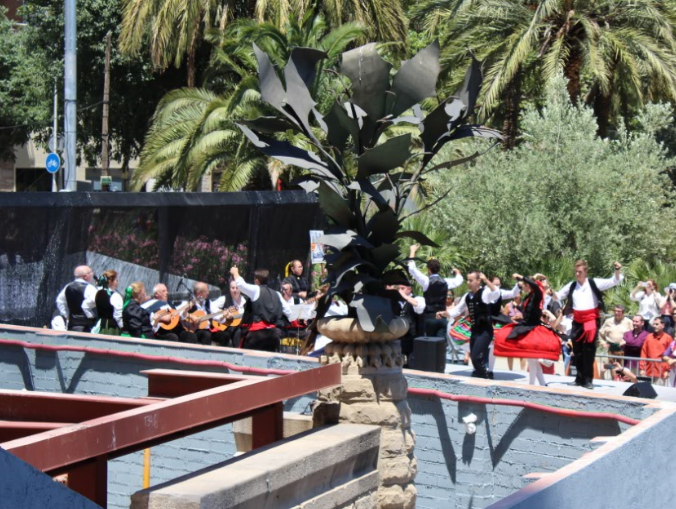 We were supposed to get there by 2pm and then go to “the tower” at 2:15, to go up an elevator about 60 meters. So we walked in I started to look for instructions on where the tower was… but the trio immediately got caught up in the beauty of this building. We immediately got separated as they all took pictures of the amazing architecture. Notice anything interesting about this architecture? They mentioned something about ribs, and muscles… when you are inside it’s like being in a living organism. It’s really cool. 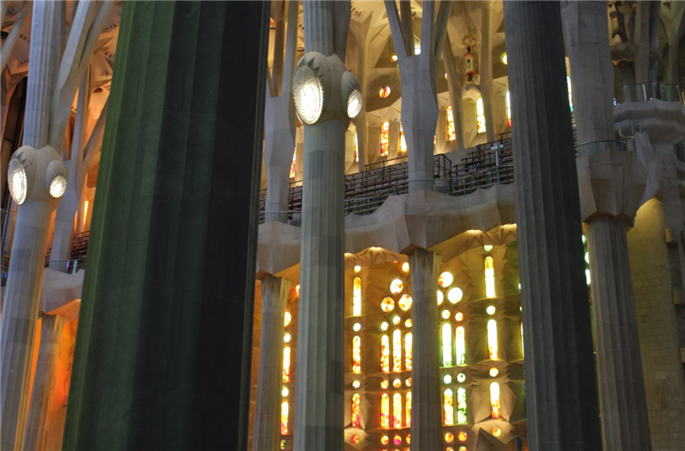 There was a lot of symbolism and on-purpose design. For example, the stained glass… on one end it was blue, where the sun rose, and the other side was red/orange, where the sun set. It was nice to be in this beautiful building with not too many people, and no one in a hurry. It was very peaceful and calm. 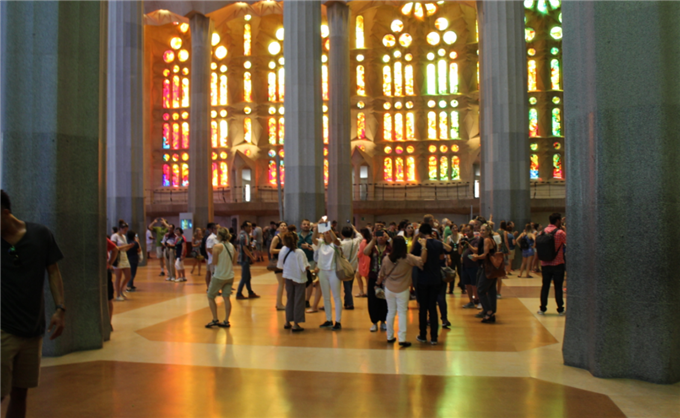 No problem… within a few minutes we all found one another, I found out where we were headed, and we went to get in line to go up.

We took an elevator ride to the top of the tower, and then the guy said “walk down.” Ah… this is why they say you have to have a good heart, no asthma, no claustraphobia, etc. But before we walked down we got to enjoy the view from the top: 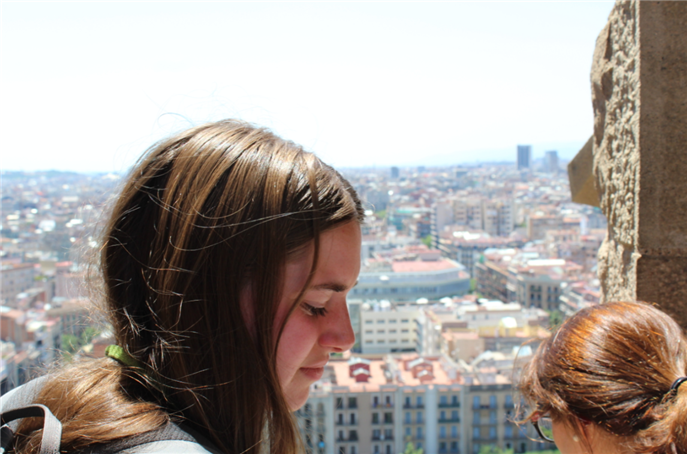 We walked down some eighty or so flights of stairs in a spiral staircase that didn’t have a rail on the inside (the inside is where, if you fall, you’ll fall dozens of stories to a splatty, noisy death!). Did I mention I have fear of heights issues? I dub this picture The Spiral Fall of Sudden Death: That’s okay. I can do hard things. I had a good enough grip on my left side, made sure to not fall toward the right, and went down one step at a time. It was cool at the top, where you could see the view of the city, but after a while you were just in a very small tower going down and down and down and down. But hey, we were THERE!

(Spoiler: I did not fall down the Spiral Fall of Sudden Death)

Here’s a shot from somewhere in the tower, looking out. It was cool to have a white-ish facade with various sections that were splattered with bright colors (grapes… know the symbolism?): 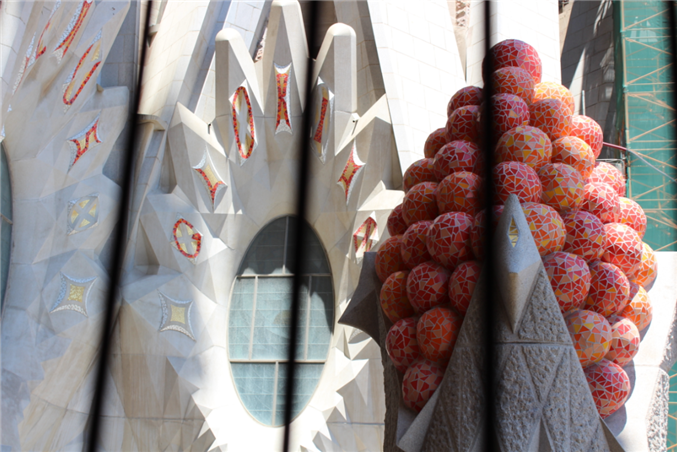 After the tower we walked around and finished listening to the seven audio guide stations and learned about this fascinating building. It’s not complete yet… the guy who came up with it (Gaudi) died in 1926 and left instructions to his apprentices and other architects. They plan is to finish it on his 100 year deathiversary (2026), and it will be even more amazing than it is now.

I think getting this far, and then finishing it, will be one of the most amazing architectural feats (this coming from the guy who built a chicken shed before this epic trip, and I have a new appreciation for architecture :p).

We went to three grocery stores in search of ziplock bags for our packing… these stores are very, very small, and only the third had ziplock bags.

As we were walking to the metro I asked William to grab these shots… this is something we’ve seen a lot here, and in Italy. These are pig legs that have been cured, hanging for sale. 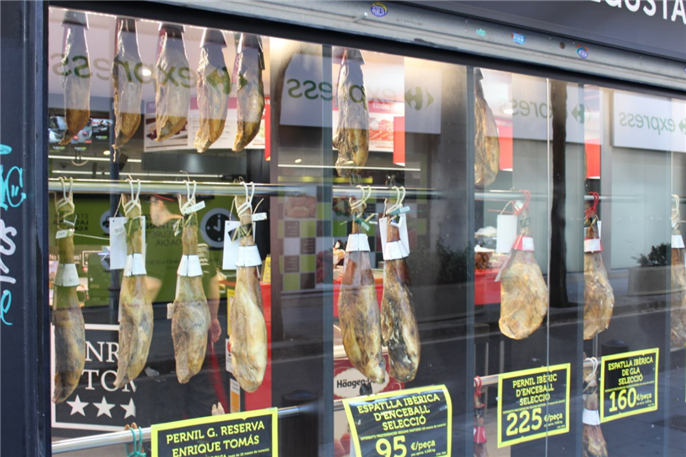 Remember my melon and ham lunch yesterday? What they do is take a leg and then shave off a bacon-looking piece and serve that to you. It’s thin and room temperature. Here are a couple of legs that they have in this special holder. You can see they’ve been cutting strips off of them. Finally, we were back on the metro, then to the train, walking .8 miles home, and ready to call it a day! I got to talk to my family at home for, I think, an hour and half. It was nice to catch up with them when it wasn’t after midnight for me, and we all had time to talk. Everyone is excited for the homecoming tomorrow. Daniel (8) gave me a tour of the house, at my request, because I told him I forgot what our house looked like :p

Then, it was time… no more procrastinating… It was time to pack! 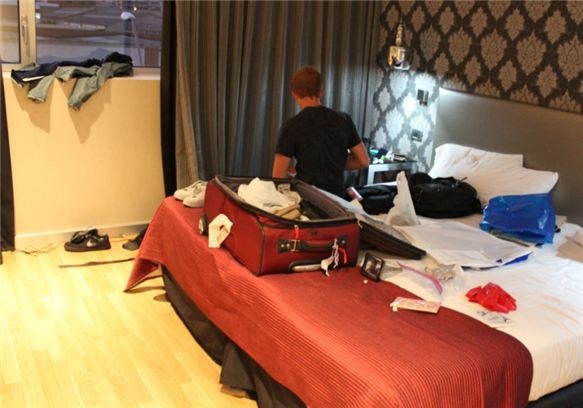 What do you pack to? This youtube video, of course! Ten points if you know what it is: We were all packed, showered, and generally got ready to leave by about 10am. That doesn’t seem early, right? Well, it is for us. I’m in that weird place of “I’m used to this time zone” and “I want to get ready for my home time zone,” and I just wake up when I wake up. We’ll be fine tomorrow, though, because we’ll all be super excited for our travel day and what (and who) waits for us on the other side of the plane!

It’s now 12:04 am here, and it’s time for bed. Thanks for following our crazy, epic journey. We’re already starting to figure out where the next epic thirty day “holiday” will be… if I had to choose right now it would be Costa Rica (or the Virgin Islands), and Australia would be an easy third. But for now, it’s time to get some sleep and then get home to see the family. My wife already said there’s a list of honey-dos for when I get home 🙂