So, we were done with beaches… four days in a row, red as lobsters and feeling burned in weird places (knee pits, tops of feet, lips, etc.), it was time to be done. Plus, we want to see some stuff in Barcelona, right? We haven’t seen typical tourist stuff, but I have no regrets…. we’ve driven hundreds of kilometers, seen amazing Spanish countryside, mountains, and see shore… what a beautiful country!

Today the plan was to go to La Sagada Familia… the #1 thing to do in Barcelona. The pictures of this basilica are amazing… and we were anxious to see it. However, I was waiting to hear back on a question I asked of the ticket sales people (“is this ticket skip-the-line?”), and they said they would get back to me on that… Um… seems like they should have that info on their website, or that whoever answers questions on the email should know that. But they still haven’t sent me a reply, and I didn’t want to commit to buying tickets without knowing if we could show up twenty minutes early, or if we had to plan on being three hours early.

So, today became a rest day.

First thing I did when I got up was take the rental car back. It was only a couple of blocks away, so I could easily walk back to the hotel. I took it to the Nissan dealership service department (the rental car company is owned by the dealership, and they said on Saturday that is where we return cars). I waited in the lobby for about twenty minutes while the one guy there attended someone else… and then he finally said to just leave the car, and the keys. He didn’t know what the rental arrangement was, so he couldn’t really close me out. There was nothing to sign, just walk away. Okay… I hope this doesn’t bite me later.

I walked back and figured out that we really weren’t going into town today. Everyone was pretty tired, so I suggested that we go out for lunch, hopefully for this famous but elusive main Spanish lunch dish: paella. “There is no bad paella,” we were told. “It is THE food to eat,” they said. Here we were, on our fifth day in Spain, and we still hadn’t had any yet. So we set out to look for a restaurant that served paella.

I asked a guy on the street “are there any restaurants around here that serve paella?” “Um, around HERE?? No. Well, maybe. About fifteen blocks that way there is a restaurant…”

Really? There are like ten bar/restaurants the next block over. That’s where we headed and within a block found one that had paella on their sidewalk chalkboard. SCORE! We were there before they closed!!

The restaurant is owned by a Chinese couple… it’s comical to talk to a Chinese person in Spanish, here them talk to others in Catalan, and then talk to one another in Chinese. Pretty cool. A lot of restaurants here seem to be owned by Asians.

The almost-patient lady explained to us what things were and helped us figure out what to order. William and I got the Paella, Ellie got a Completo (watch Kid History? “One Completo, One Dollar!”), which is a hot dog. Yes, we were totally surprised that Ellie would order a hot dog. “Don’t tell me mom,” she said. Sam got grilled chicken breast with a fried egg and a salad (that is one menu item). Sam and Ellie both ordered onion rings. This was going to be a great meal! My meal included another order of something… I was going to get a salad but Sam was like “Dad! We are in Spain! Order the Spanish thing!” So I got Jamon y Melon, which is one strip of a honeydew melon (a few days away from being ripe) and strips of Spanish ham, which is pretty much cold bacon.

We chatted as we waited, which was a while. On the one hand, we are not used to waiting this long for food to be prepared, on the other hand it’s awesome to know (or assume) it’s being prepared from scratch, and not just reheated.

The food came and we started to dig in. Ellie realized that indeed, a Spanish hot dog is like an American hot dog, which she is vehemently opposed to eating. So she picked at it, tore it apart, but didn’t eat much of it. This is the look of a girl who doesn’t eat hot dogs, as she realizes she ordered a foot long hotdog :p 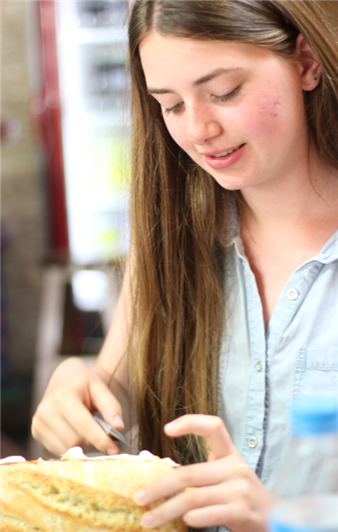 For some reason Sam didn’t like her chicken, and the egg tasted “like they poured a lot of melted butter on it.” Her salad had half a can of tuna poured on it, so that was immediately out of the question. 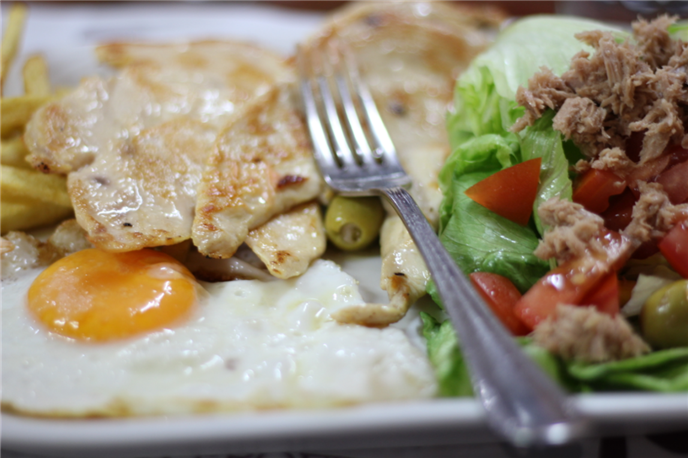 At least they had onion rings to look forward to, right? Our waitress brought out these gorgeous onion rings: 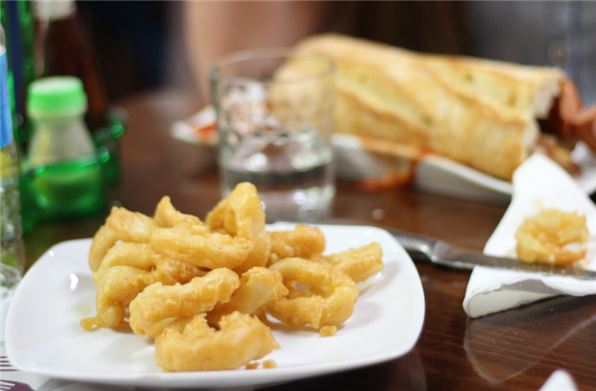 What’s funny is that Sam and Ellie ordered the onion rings based on the picture, and didn’t read the words. What they thought were onion rings were actually fried calamari. That is, fried squid. Oh my gosh… this was hilarious. At least the waitress misunderstood and only brought us ONE order of “onion rings” instead of two!

Notice in the picture above there is a lone onion ring on napkin (upper-right corner). That was the one Ellie enthusiastically grabbed and bit, so excited about an onion ring… and then she realized it was NOT onion inside. LOL.

I happen to love calamari, and this was the second best I have ever had. I think this was my face as I realized that I was going to get the whole plate to myself 🙂 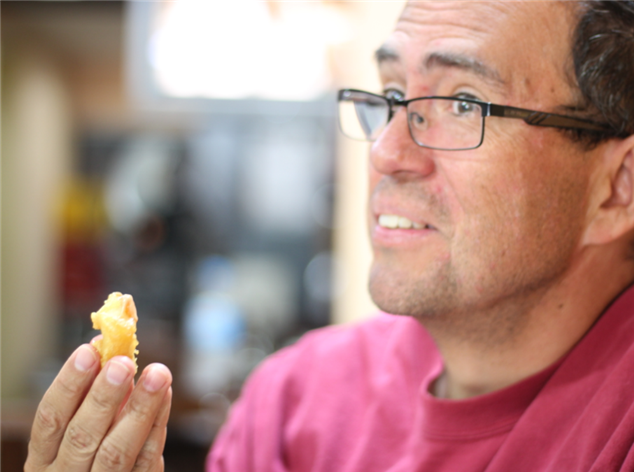 It just needed an exquisite white garlic horseradish sauce… instead of our mix of mayonnaise and ketchup, but the batter was so light that it made up for that. The girls, however, where realizing that good tasty food in Spain was really hard to come by! Between the seafood on everything and the “kitchen is closed” at 4:00pm, it’s hard to get nourished! This was the first time where they were like “well, we could go to Burger King…” You have to know them to realize that they would have to be in a very desperate state to admit that Burger King sounded like an acceptable option :p

Our Paella was okay. I’d give it a solid six or seven out of ten. I want to try to make it at home… but ours had a full-bodied shrimp (so you had to work to get the poop line out (which William unsuccessfully did), the head off, crack the tail open, etc.), and too many bones in the pork. I liked it well enough though.

Our $12 meal included dessert, which for me was flan (SO GOOD) and for William, Neapolitan ice cream. We thought it was a choice of chocolate or vanilla with whipped cream, but when they brought it out it was just a slice of Neapolitan :p So much for communication. I think the owners were glad when we left… we had too many questions, like “can I have the chocolate?”

After lunch we walked the long way around the block we were on, then went back to the hotel. I went to nap and William went to hang out with fun people (the girls). My nap was interrupted by the horrid heat of our room. The whole time we were there our air conditioner wasn’t working, even though one of the receptionists claimed there was nothing wrong, and that “it’s hot in Spain.” Well, the girls room was fine, but ours was like a sauna! Even my toes where sweating (I didn’t know toes sweat)!

I went down after that lady was gone and the new receptionist changed us to another room. In this room the air worked and hallelujah!! We should have done this days ago.

So, that was about our whole day. Lots of resting, I caught up on JibberJobber stuff, and the Trio hung out and did Trio stuff.

A rather boring day, but much needed rest. Tomorrow is our last full day in Barcelona, and then we fly home the next day. Let’s see if our plans work out tomorrow!