Today we headed out for a 1pm appointment at the Vatican Museum. The Vatican Museum is different than the Vatican, which where church business gets done. The Museum is where the tourists get to go to see all of the Catholic Church’s paintings, statues, and other stuff. It is MASSIVE. We didn’t see everything, but we saw a lot. Here… read this about the Vatican City.

Here’s a bit of trivia… I was watching a documentary on the Vatican and it said that based on the population of the Vatican City (officially Vatican City State), it is the country with the highest crime rate in THE WORLD. Isn’t that crazy?

Here we are in Europe, living the thug life.

Highest crime rate in the world.

It’s because of all the pick pocketing going on here.

We got our tickets online two days ago (maybe it was three days ago), printed them out, and then sat on them until today. We had to be at the ticket office to go in with the group, which means we get to skip the line, by 12:45. We got there and got our little tour group stickers by 12:20, which meant we had plenty of time for lunch. We walk across international borders to Italy and Sam and Ellie go to an expensive looking (read: not hole-in-the-wall) restaurant while William and I continue down the road looking for kebabs.

The beautiful thing about kebabs (which are what we know as gyros in the U.S.) is that they have lots of meat and not many carbs. And here, they have a bunch of lettuce and tomatoes. We are sick of sandwiches and pizza… and feel meat deprived. More on that later.

So we have lunch and head back to our tour group area inside Vatican City (yes, we leave Italy again! Twice in one day! I only wish they would have stamped my passport). The thing that really stuck out at me here was the number of beggars. There are a lot… some are in shambles, some are have no legs, some are really quite hunched over, but others look really good with clean clothes, and they are clean, but hey, why not? All these good-willed Christians… I overheard someone saying they heard that beggars here can make $500 to $1,000 a day. Crazy.

It really is beautiful in here… this is where we’ll be tomorrow to hear the Pope speak: 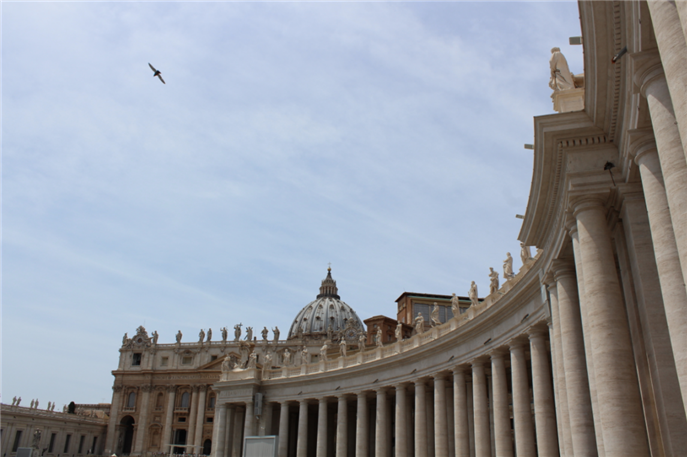 The tickets I got were “skip the line” tickets… the irony is that we sat around for a long time waiting to skip the line. Finally, it was time to go, so once again we left Vatican City and followed our little tour guide who was holding up a long pole with a brightly colored flag… this was so we could follow him through the busy streets on our way to skipping the line. 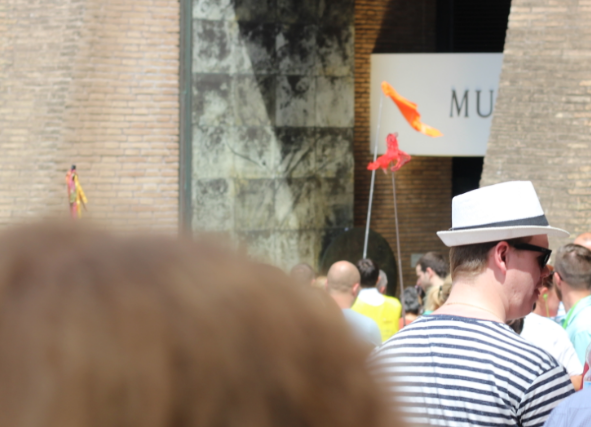 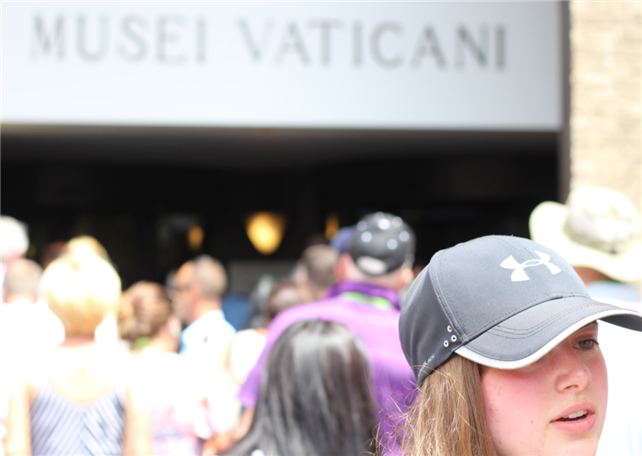 There must have been a good 75 people in this group, all following the flag guy. We walk this way and that, around this corner and across that street, and then we see “the line” that we were skipping. That’s where you feel like you are saving time, because you skipped the line!!

We get to the entrance of the museum and we get in… a long line. It was full of skip-the-line people, but it was long. Bleh :/

Finally, we get through that and follow our little flag guy… until he stops and just stands there and our group seems to break up. It was kind of chaotic in this area… we had passed security but we still weren’t “in” the museum yet. As we’re waiting in our new “line” I see people break off and go other places, so I go ask him “do we still stay with you, or what?” He says “oh, no… go see that girl for your tickets.”

Please, please, help us. We are here, ready to do this thing… is there anything you can do? Long story short, we spent about 30 minutes waiting with her, and she got our reservation changed to today. Finally, with official tickets in hand, we go up the stairs and to another line where we scan our tickets and we are officially in the Vatican Museum.

Where do you go? Most people went up an escalator but that was packed (that will be the theme today: packed!). We opted to walk up the spiral walkway… and it was really, really cool! It was decorated with a lot of boat models from across the world, throughout time. Very cool And the walkway was awesome.

Here’s a shot of this walkway from the top… that is a canoe at the bottom: 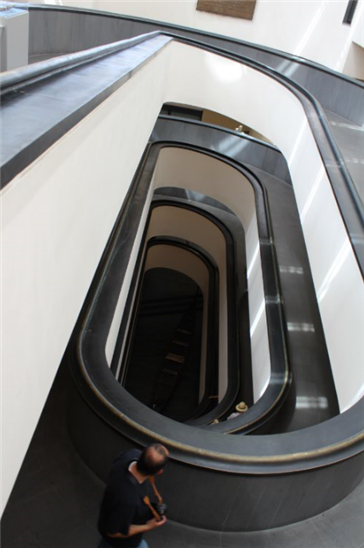 Once we got to the top we had no idea where to go. You could go in at least three directions and the signage wasn’t very helpful. So, we picked Door Number One and just walked and looked and soaked it all in. Soon we were outside, in a courtyard that had a restaurant and some ancient Egyptian stuff. Then, back in another door with a quick trip to the toilette (that’s what bathrooms are called here), and then up the stairs.

The rest of the day was pretty much that… stairs, long hallways, tons of statues, rooms with statues, statues of people, statues of Roman gods, a room with animal statues, super long hallways… the map hallway (that was very cool), the rug hallway… more statues… here are some of those amazing things we saw and walked through: 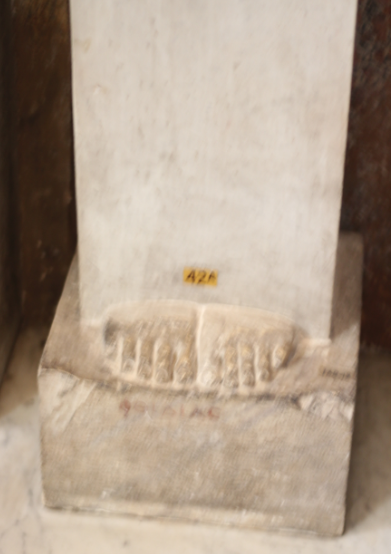 Just a statue with toes at the bottom… that was all. 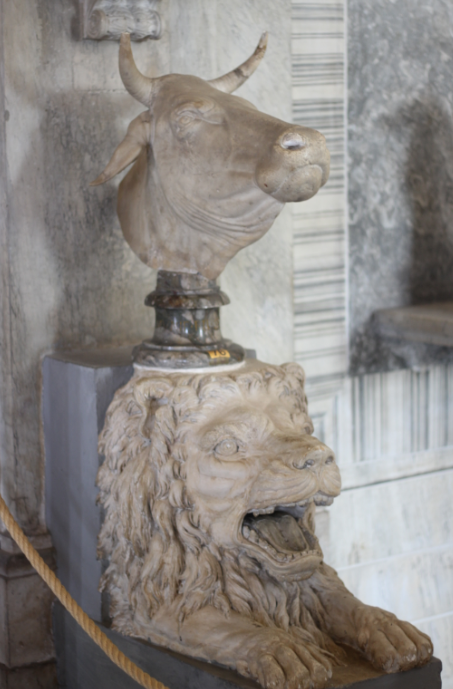 This dog statue is missing various parts, including the lower jaw :/ 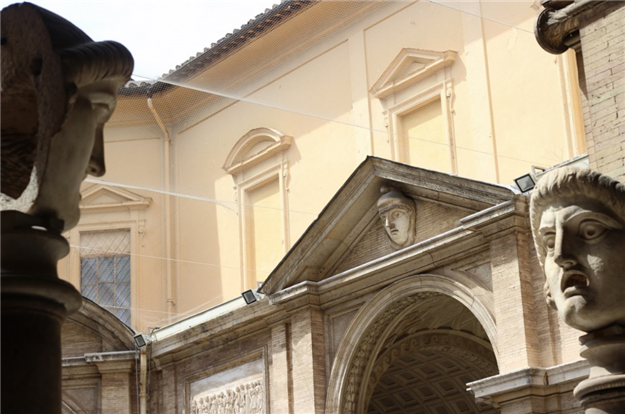 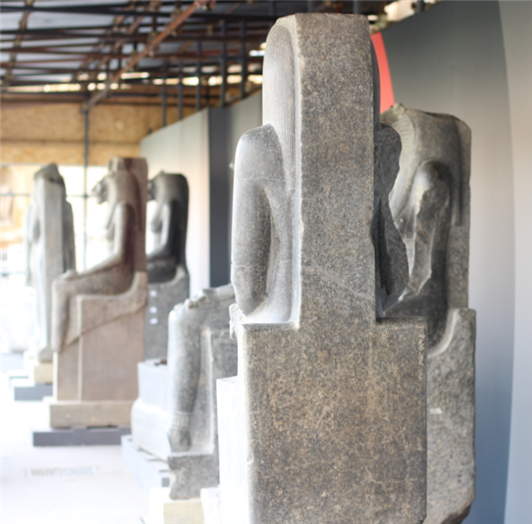 My question was, where did they get these Egyptian relics, and why do they have them here?

Unfortunately, there were so many people it felt like a crowded subway during rush hour. Everyone moving along slowly, some people pushing their way through, but hard to stop and enjoy any of it. 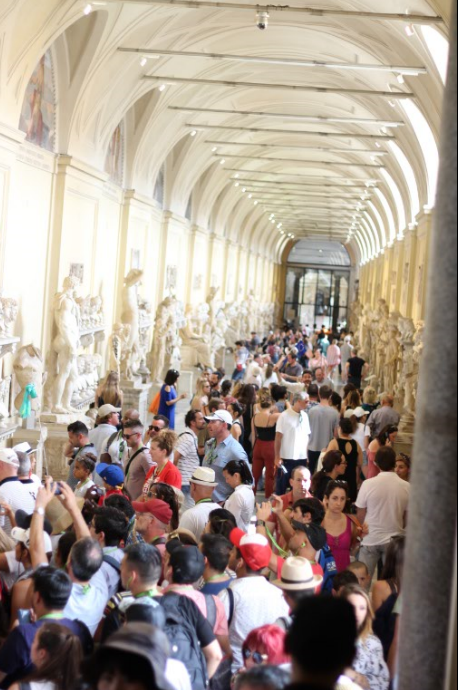 There were paintings all over, and paintings on the ceiling… in fact, thinking back now, it was as if every square foot of that place was covered in something. It was a very visually busy place. This was cool to walk into. We were in a fairly dark area, then it opened up to this, which was very bright… gold on the ceilings and blues on the walls. William found a map with “Alba” on it. I always knew we were famous for something :p

Here are some statue shots from William: 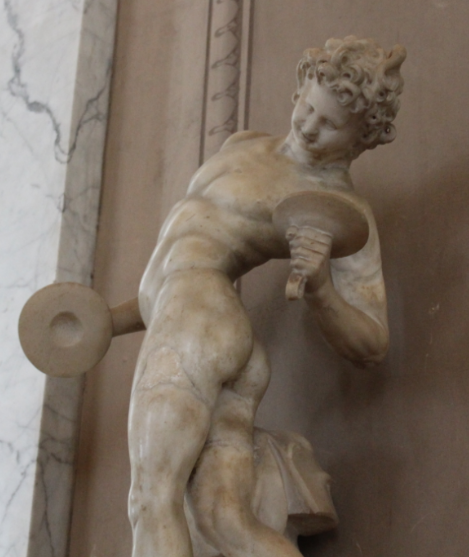 Not sure what this pose is about… :/ 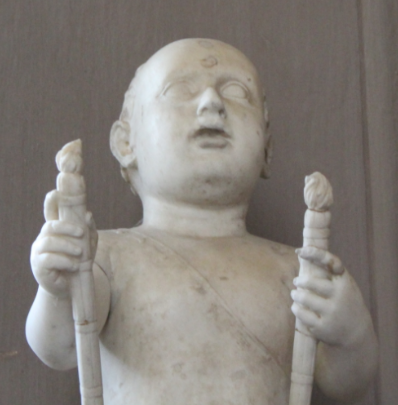 Why? Because it’s a balding baby, William says. I say it’s a cross-country skiing baby.

We wanted to get at least one picture of statue that had clothes on… ! Some of the statues in the animal room.

Finally, I think this is the tiled floor that was in the Secret Castle ramp, from yesterday: We worked our way around this way, through that way, and kept following the signs to the Sistine Chapel. If you don’t know anything about the Sistine Chapel, read that link. It’s pretty important… when it’s time to figure out who the next Pope is going to be, the Cardinals lock themselves in this Chapel until the new Pope is chosen. It’s an epic and important place for the Catholic Church.

This was the only place with a bunch of guards saying “no pictures, no video.” And, “keep moving, and don’t sit there.”

By the time we got there we were ready to find the exit… so we went towards the exit signs. The cool thing is that the exit is far away, so on the way out we went through many more rooms with a bunch of relics… including one of my favorites, the globe hallway. We also passed a lot of shops along the way where you could by all kinds of Vatican memorabilia… interesting that they had those little shops (and a few restaurants) as well as the big bookstore at the end.

To get out you had to go down a spiral walkway-slash-staircase (it alternated)… here are two cool pics from that: Finally, we were out, and looking for a metro. There are two metro stops close by, so we took a gamble and just started walking. It paid off… before we know it (maybe ten blocks away?) we found the metro and started our way back.

Might sound like a slow day but we walked 4+ miles and saw a ton of stuff. We left Italy three times, and spent time in The Vatican… wow!

Before we went to our B&B we went shopping… another 25 euros of healthy food… remember I talked about weighing the veggies? Here’s what the machine looks like. You hit the number (99 for zucchinis and 50 for lettuce :p) and then it weighs it and spits out a price label that you stick on the back. Also, I mentioned you have to pay one euro (about one dollar) for a shopping cart… here’s the mechanism for that: When we got back we all kind of crashed… I put on a documentary about the Vatican and then slept through a good part of it (William told me what I missed later). Ellie did yoga and William took some pics and just bummed around. I asked him if it was hard to have downtime… he’s young after all, but he said “no, we’ve been walking a lot!”

After my nap he and I were ready for some meat… so we left the B&B around nine and strolled up and down our street… we went past the normal metro to see what there was. This is what our street looks like: William got five euros of pizza (a lot of food, really) and then he and I went to a chicken cafe / bar (yes, I took the boy to the bar tonight). It was a place with burgers and fried chicken patties, fries, etc. This was on the wall… I can’t tell if this is American or Italian :p The thing that caught our eye was a plate of grilled chicken. “It’s too hot,” the guy said. “Bring it on” was our reply.”

What seemed like an eternity later (maybe 20 minutes?) they brought out our food… this was just grilled, blackened (the way I like it) and super spicy. It was SOOOO GOOOOOOD. Finally, I have found my meat fix. I should mention, I’ve had a banana and a lot of lettuce today, but all this carb diet is killing me. We got back and chilled the rest of the night, until now… it’s almost midnight (11:55), and we have a very early morning tomorrow. Tomorrow the plan is to leave at 7 and head out to the Vatican again to see the Pope address the crowd. That will be interesting… the only thing is, no plan that we’ve had that involves getting up before 11 has worked out :p We’ll see.