The plan was to go back into Paris (about ten kilometers away) and do three things:

1. Catacombes de Paris,
2. Go inside the Notre Dame cathedral (we haven’t been inside yet), and
3. Go inside the Pantheon, where a bunch of famous people (including Marie Curie!) were and/or are entombed.

We had a bit of a late night (no reason, really) so getting up this morning didn’t happen until around 11:00. We had a quick uber ride into town and got dropped off right at the line to get in the Catacombs. I was excited to wrap up our Paris experience, and these three things seemed like the right way to do it!

The line to the Catacombs was ridiculously long and slow moving. I tried to find some “skip the line” tickets but you have to buy those before you get there (darnit!!), at least for the ones with guides. How long do you sit in a line to visit this place? Apparently more than three hours! Ugh. But it was worth it… not only did we get three+ hours of bonding time, this was a highlight of the trip. William said “that was the best museum that we’ve been to.” Win!

The line was long enough that when we got in, it was about 3/4 of the way around the block… and seemingly not moving at all! Here’s the view we had for a solid 3+ hours: 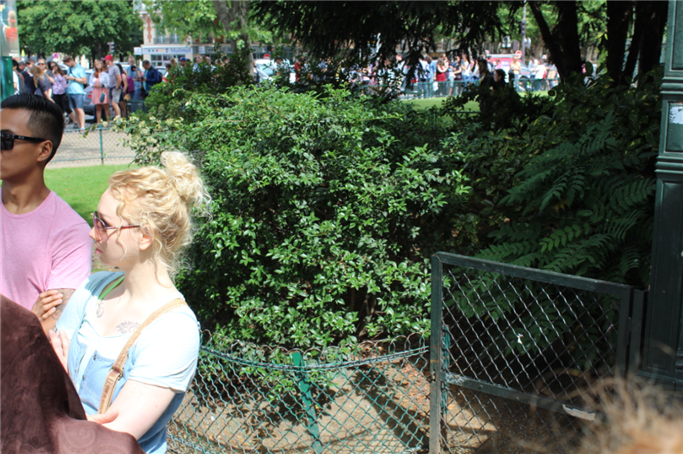 How do you stand to stand in line for that long, even when you are with people that are fairly cool and generally fun to be with? By getting these monsters! 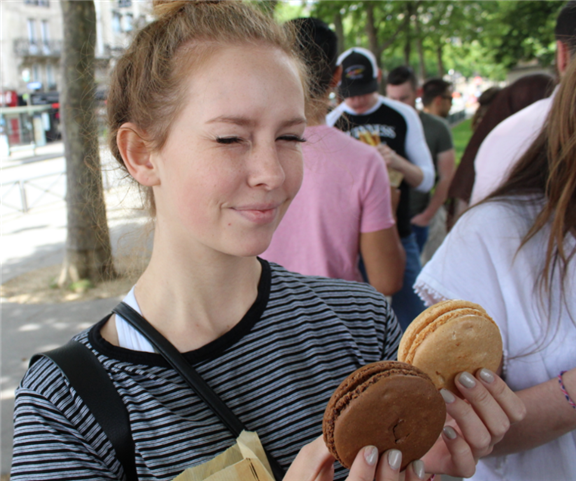 You’re going to want to mentally hang on to that image for a while… the next few photos might make you squeamish.

We finally got to the cashier and bought tickets ($12 + $5/each for the audio tour) and started our descent to the catacombs. This is 130 steps down… let’s say that is 10 stories… down and down and down a spiral staircase that seemed to never end! Finally, we get there and…. NO BONES!

The first part of the catacombs self-guided tour are tunnels. We are now below the subway and the sewer systems (think Les Mis)… and I learn that this is where a lot of the rock used to build the buildings around here came from. “Ideal” for building buildings, they say. Can you imagine (a) being the worker who cut out big blocks of ideal stone, or (b) being the worker who got said blocks 10ish stories up to street level? Probably a gazillion times? WOW.

This whole walk is, I think, 1.2 miles… so we still have a ways to go before we see bones. But finally, there they are… stacked neatly, and with designs. This was really fascinating, and we all left wondering “where did all these bodies (bones) come from? Why? Where are the rest of the bones?” what we see are mostly leg bones and skulls.

Before we start off with a collection of macabre pictures, here’s one of a pretty flower. On bones. 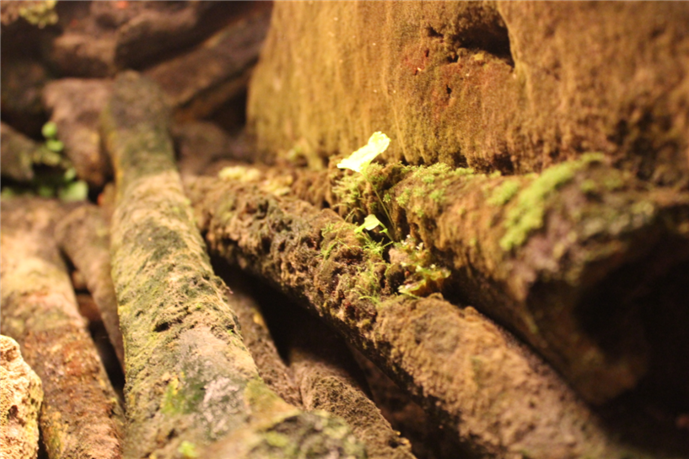 Everywhere there was light, there was growth… like in the picture above, but mostly just green (moss?).

Here’s my somber look by a wall of bones… actually, that’s my I’m-In-Pain look, since I’m kneeling on rocks (the ceiling was about 6’2 to 6’5 in most places): 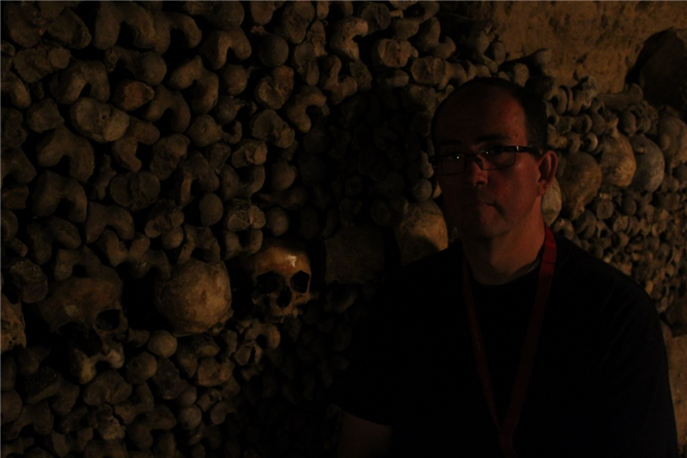 Here’s a pattern… my guess is this is a cross. People had jobs to move and then restack the bones… interesting, huh? 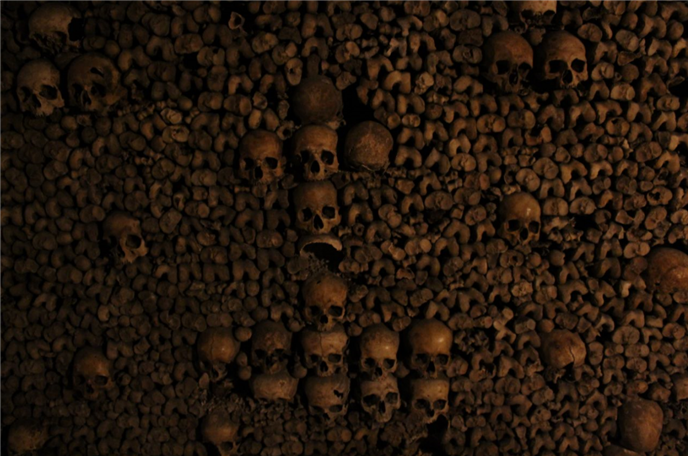 Here’s another pattern… there were lots of patters to find: The front of the walls are meticulously stacked, but on top the bones were just scattered… in some places the went ten or fifteen (sometimes more) feet deep! 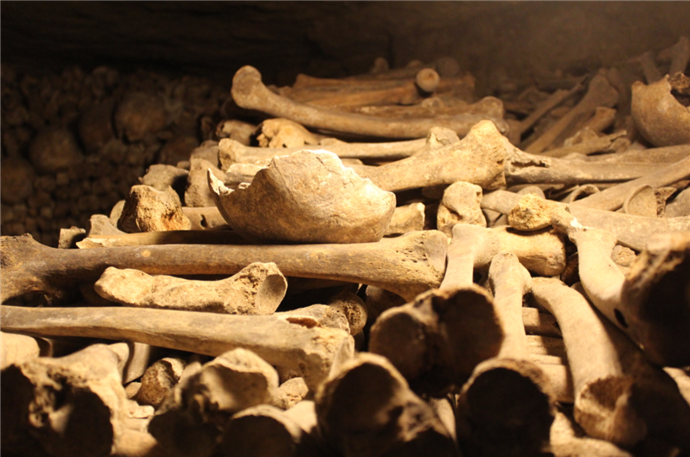 Here’s another pattern… remember, this is a 1+ mile walk, so that’s a lot of bones (and we couldn’t even go through all the hallways): 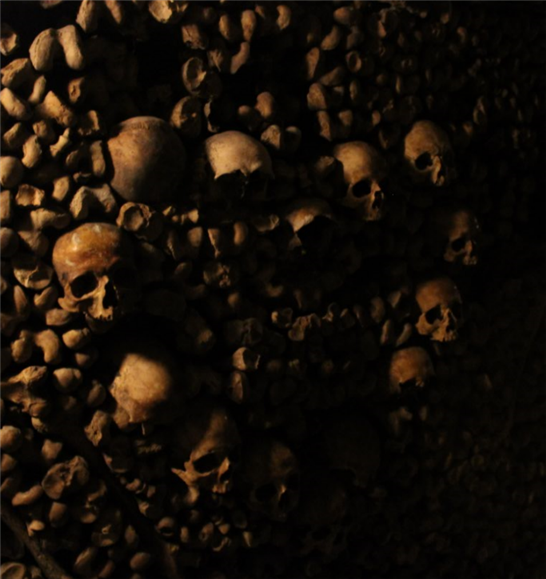 Do you ever get the idea that the bones stackers had fun? 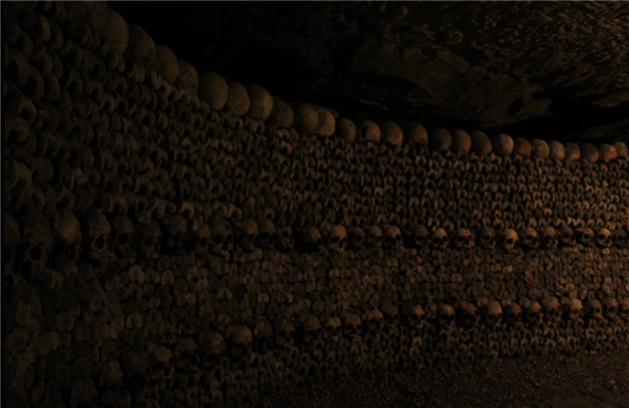 We ascended from the catacombs, spent a few minutes in the gift shop (just looking), and then figure we have about a mile walk to the Pantheon. We’re hungry, but we somehow mentally muscle our way through the hunger so we can get to the Pantheon with enough time to go inside before it closes! I didn’t factor 3+ hours of line waiting in our plans!

Oh yeah, another way to help you not stop at every restaurant you go by is that most of them were closed today…!

On the walk to the Pantheon we passed a guy on a bench drawing… I thought “how Paris!” I wanted to get a picture of him, so I went to ask: “Do you speak English?” “Yes,” in an obvious American accent. “Oh, you are American? Where are you from?” “Kentucky!” He’s a professor here for a month with a study abroad group of students. Okay, so he wasn’t a local Parisian, but it was cool to see this artist in the city of art! 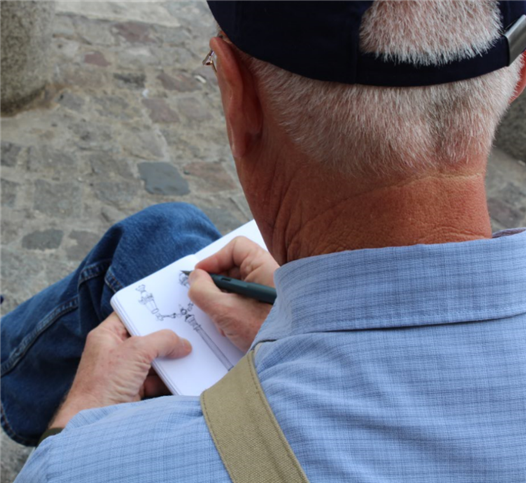 Also, yesterday I mentioned that we use the word “pompis” instead of butt in our house, which is a word I got while living in Mexico… so I had to get this sign for my kids at home :p Finally, we get to the Pantheon. Read up on this… it’s fascinating. When we got there it was almost closed (darn line at the Catacombs!), and it was 9 euros… we weren’t excited to pay that to go in just for a few minutes… so we walked around, gawked at the building, and then headed to a cafe. Here’s a picture of the columns in the front… they were pretty awesome: 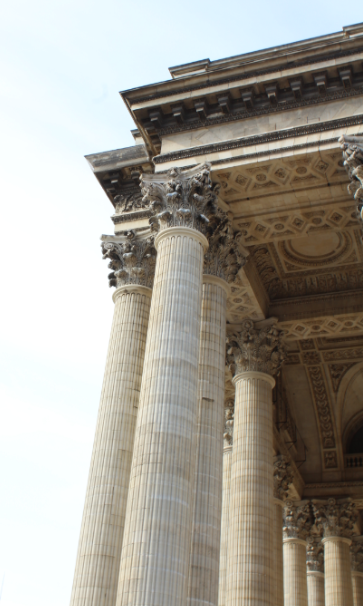 The restaurant we went to was some crepe place almost right across the street. It was crowded but that was because pretty much everything else we passed was closed. It pays to stay open :p Here are two of my travelling companions… these are the faces of two people who have walked and walked and walked and hadn’t had much food or water all day: The restaurant was Paris-cute… charming. Our waiter’s name was Jean-Jaques (he said that was an unusual name)… here’s my view from where I was sitting, with the Pantheon in the background. Notice the books… there seem to be books all around this place… bookstores, a whole row of stands/vendors with books, and books lining the walls in restaurants… a very booky place! After eating we knew we couldn’t go inside the Notre Dame because it was closed… we walked across the street to the souvernir shop (William is looking for something very specific), got some things, and then called our Uber. Here’s what The Trio looks like when we wait for our uber: I thought this was a super cool shot… right on the corner where we were waiting… not much of a gallerie, right, but the colors of these rusted shutters were neat, contrasting the green paint:

Right after I got that shot I had a model jump in… funny how that happens: Our Uber came… we’ve scene this scene a bunch of times on this journey. They ask “Are you Ellie?” (we’re using Ellie’s uber account)… the funny thing is Ellie is like Eli, which is a guy’s name here… so they aren’t expecting Ellie-the-girl to be the one who is Ellie :p We ask their name, and then we hop in. That was it… our last day in Paris! Tomorrow we have some laundry and other housekeeping stuff to do, then catch a very late flight to Rome! 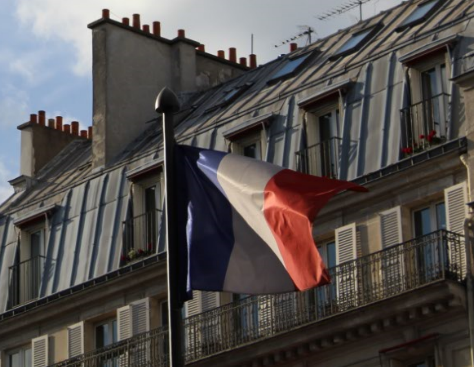