This morning I got up and my ankle wasn’t feeling better after resting all night 🙁 Darnit. Also, my left calf was really sore, probably from compensating for the ankle… so I declared a sick day for me to get a bit of rest from walking.

The Trio was headed out to Monet’s Garden, which has special meaning to Ellie because of some show she used to watch… this was near the top of her list of things to do in France (I, on the other hand, had never heard of it… remember, failed out of humanities? :p).

I hoped it was all she could ever want… and when they came back that evening around 8pm they said it was AMAZING… after they went through Monet’s house and gardens they walked around town and all have said that of all places that we have been to, the town of Giverny, France, is where they could easily see themselves living. Here are some pictures of their journeys (including Ellie with her bridge :)): 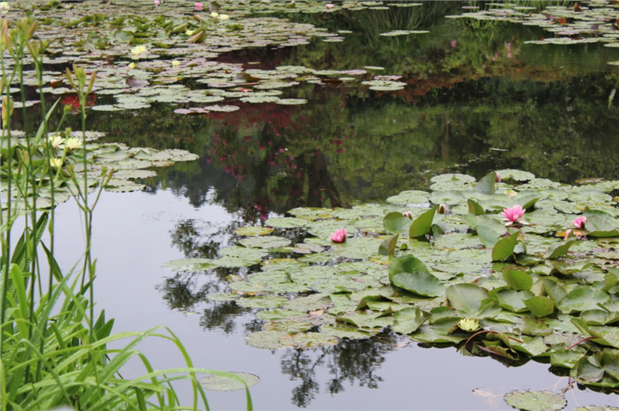 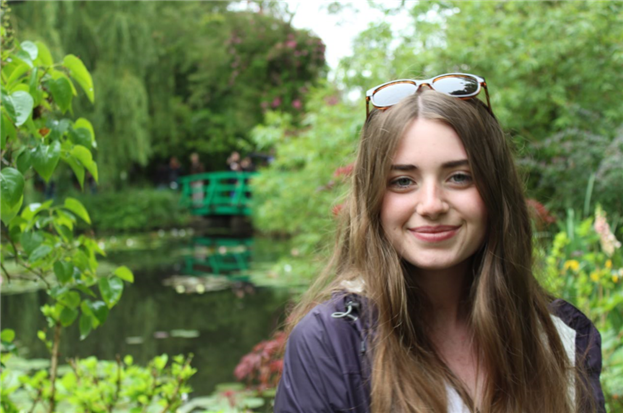 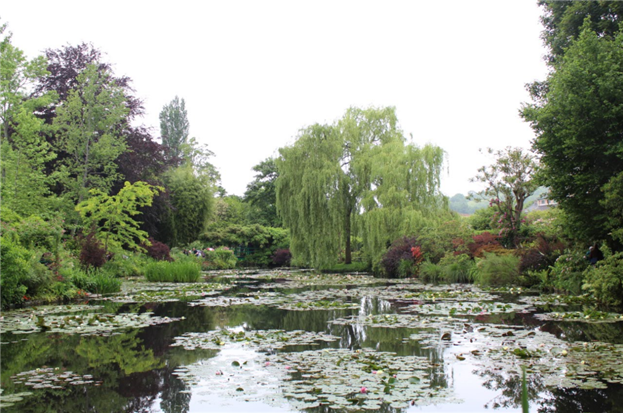 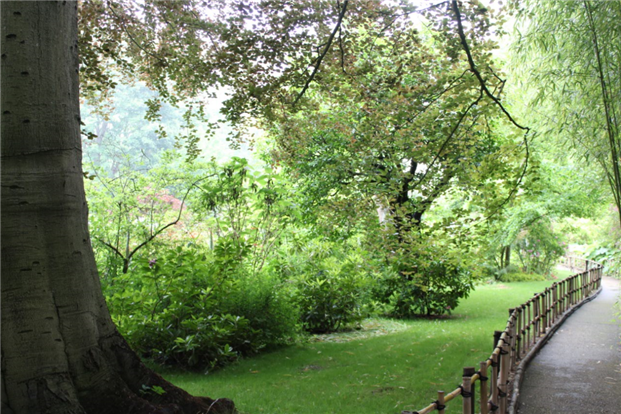 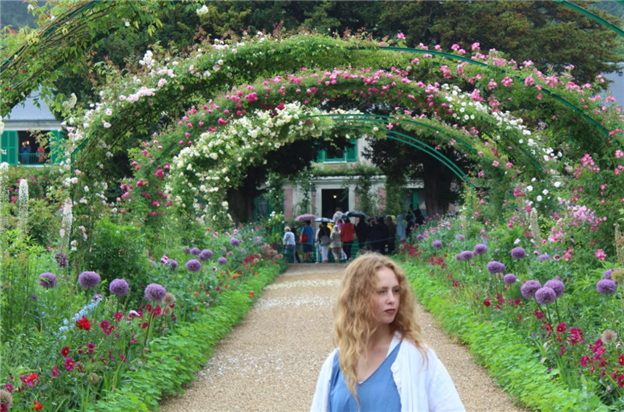 I loved this picture they got of the dad/grandpa with is kid…. the kid’s face shows love and trust, and the gpa’s hand on his body shows love and protection… in all parts of the world we can find this love 🙂 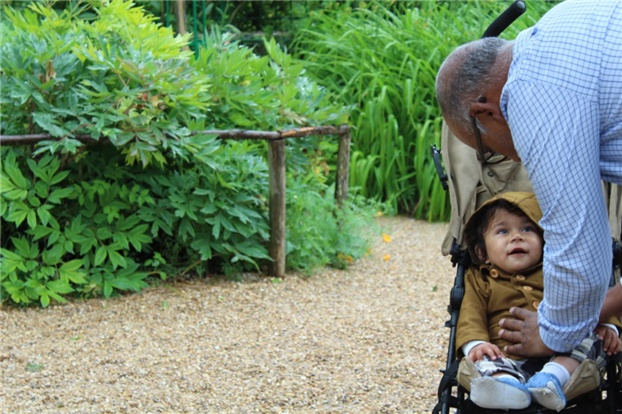 Here are pictures of the town they fell in love with: 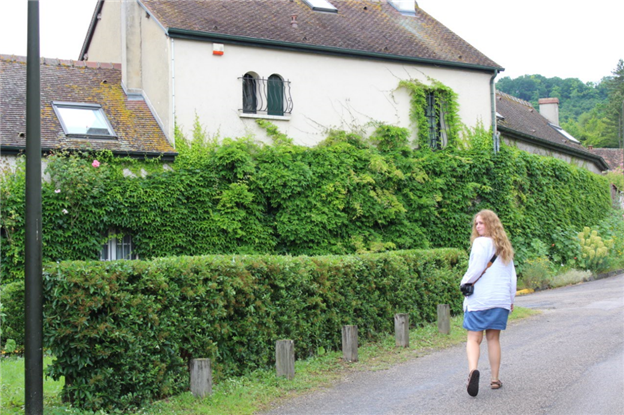 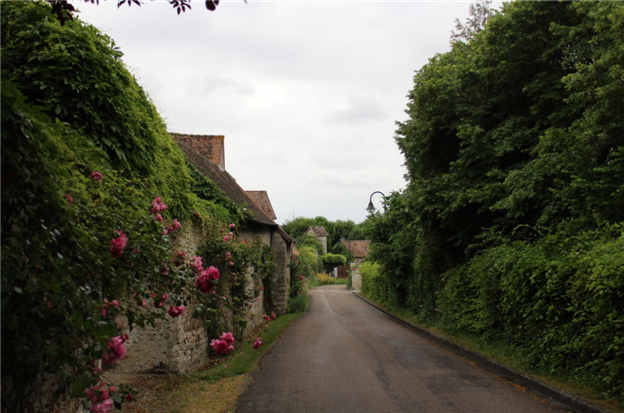 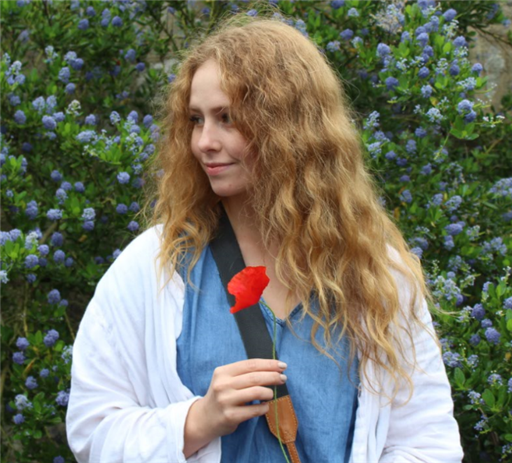 They got home and we realized we better go out and look for dinner before all the restaurants were closed. Everything closes early here… it’s not easy to find a restaurant if you are hungry at 9 or 10pm, that’s for sure!

From our hotel/apartment we turned right and went to the end of the road… this is where the post office is, a much bigger grocery store than the little corner store that we’ve been going to, and hopefully a few restaurants that were still open.

“Where’s a place we can get dinner?” “Oh, down the street, over there…” So we go out, turn to the left, and immediately (right next door) was the restaurant he recommended. We thought we were going to walk a block or two or five, but it was just next door.

This little restaurant sold gyros, burgers, pizza, and probably other things… we agreed on a pizza and learned that if you buy one to eat there, you can get one to take home… so we did that. We ate a “curry pizza” which is a pizza with curry stuff (sauce, chicken (?), potatoes) and lots of cheese… it was good, but definitely different (potatoes on pizza? Really, not too bad). 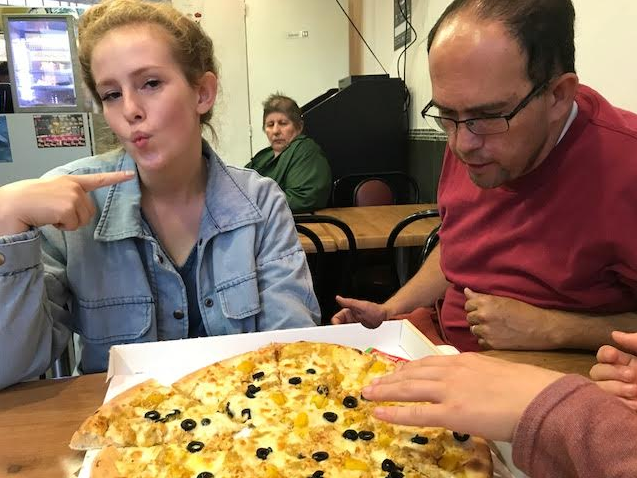 We ate that there with the Spain/Italy soccer game on the TV, and about eight guys sitting in this tiny restaurant (with us being the only ones eating). We asked the server, the only person who spoke English, which team they were cheering for (Madrid Real), and then enjoyed our local sporting event with “the guys.”

Funny story… I saw an older (maybe 40ish) guy come in and start watching the game… he was standing at the counter and was more serious that the others, who were younger and very chatty. Another guy walked in and patted him on the butt (or as we say in my house, pompis (which is from Mexico)… he immediately turned around and was like “what the heck are you doing? Are you crazy???” The younger guy who did it very quickly pointed to the guy behind him and was like “Dude, why did you touch his pompis?” It was very playful, and very funny… to me. The older guy was mad, and went on a soliloquy that I only imagined the meaning of (this was all in French), and I was reminded of me as a teenager who would have done the same thing. LOL… boys will be boys 🙂

We finished our pizza and our tiny bottle of water that we all shared, then walked back home (with a box of pastries and our carry out pizza (“vegetarian with pepperoni” :p). It must have been nine or ten… the sun was still out, the clouds were beautiful, and it was just lovely.

We got home and settled for bed, and I got to talk with my wife and kids back home for a while. They all sound great… we’re about half way done with this trip, and it will be nice to settle down into “normal.” But, we’ve got a couple more countries to enjoy before we do that.

Tomorrow, we have big plans! Back to Paris to go to the Catacombs, inside Notre Dame, and the Pantheon. For now, rest!