Sooooooo, today I woke up and my ankle wasn’t much better than the night before. Remember, we walked about four hours the night before, and had a good walk from the train to the hotel. I could tell I was ready for a rest, or else. I want to see and do it all, but I don’t want to injure my injury… so I told The Trio they were on their own for most of the day. 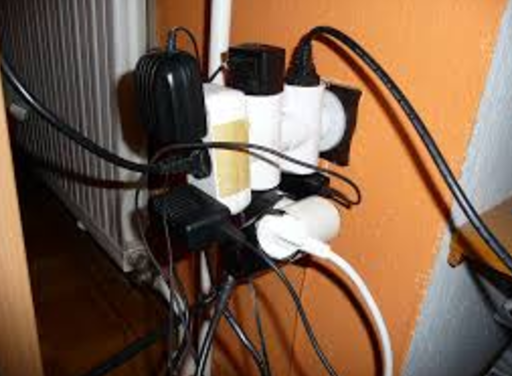 Maybe not that bad, but it’s too many adaptors 🙂

I also got some ice, which was not at the first grocery store I went to, but luckily there was about a pound or so from the Waitrose store, which has turned out to be our best bet for shopping for food stuffs here. I got home, got ice on my ankle (it felt SO good), and bid the tourists adieu. We would meet back here around 4pm, then head out for the Queens Theatre.

The Travelling Trio had a great time exploring all over London… well, some of the sights. They saw Westminster Abbey, Big Ben, Buckhingham Palace (kind of, not good enough), Parlament, and eventually made there way to at least one free museum. They walked so much they were tired, which is awesome… here I think I’m slowing them down, and they told me they had to rest a bit even when they were on their own 🙂

Ellie messaged me that they wanted to just meet at Queens Theatre since they were close to there, and coming back home just to get me would be, well, not fun. Cool, no problem, let’s meet there at 6:30 (the show started at 7:30).

At about 3:30 I had my times mixed up and thought it was 4:30, and thought “I better get going! I only have two hours to walk 1.9 miles with my bad ankle.” And, I don’t have a great map (I have a big map of London, from the hotel, but it’s BIG), and it looks like it’s going to rain, and I don’t have a phone or GPS… it’s OLD FASHIONED time! I go to Google Maps, get the directions, and write them out on paper in my special shorthand (no printer, of course). And I set out. This looks easy on Google Maps, but there was a point that was hard once I got there:

It was a great walk, really… I walked the same path as what got us home the night before, in the dark. I recognized most of it, and quickly got to St. Mark’s Park, which is on this side of Buckingham Palace. The only problem is that Google’s directions kind of choke once you get around that area, and it took me a while to figure out how to get pointed in the right direction again. The big awkward map came in handy. It was comical to use a paper with handwritten notes + an old fashioned map when everyone else had their phones, Google Maps, and GPS.

From the government building area (past Parliament, past Westminster Abbey, I went by the Museum where The Trio spent a couple of hours, and started to get into the tourist/restaurant area. I went down an alley that had shops, including book stores and a model store (model cars, etc.), just to look. I had plenty of time before I had to be there (and no way to coordinate meeting early), so why not look around? It was pretty cool to be in those alleys in those little shops.

I went out from there, still going in the right direction but not exactly sure where I was, and got to Chinatown. It was pretty cool, but I was surprised at the prices of food. This was clearly still part of the tourist area… I started to see various theatres, and street performers, and still had at least an hour and a half before 6:30 (I left an hour earlier than I thought, so I had three hours to get to the Queen’s Theatre, not two). After slowly walking around, hanging out, watching the people and the performers, and taking it all in, I thought “it’s food time!” Hadn’t really eaten all day (except for some granola bars at the hotel)… so I was looking for some places. I saw the Shake Shack and much to your surprise decided not to go there (not in London!). While in Chinatown you eat… well, I guess I was up for a Chinese buffet. No, it wasn’t good at all. Yes, it was overpriced.

I walked around some more… I had at least another 45 minutes before I had to meet up at the Queen’s Theatre (the buffet was directly across the street, so I now knew where I was and would surely be on time. In fact, before dinner I even went to will call and got our tickets… so I was ready!).

The most popular thing around this mega tourist area wasn’t the Lego store, nor was it the massive M&M store, or the Nickelodeon store… it was this: 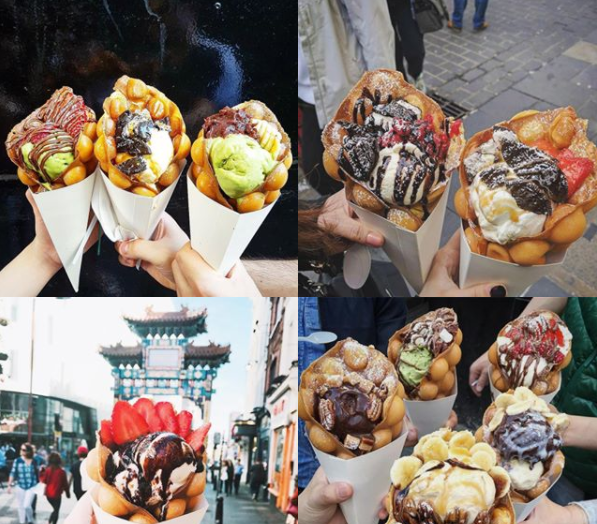 Have you ever heard of this? The line to get this was ridiculous… about as long as the line to get into the Winston Churchill War Rooms! This is London’s Bubble Wraps … ice cream cones that look freaky, with all kinds of toppings on them.

Finally, I figured it was time to head to the theatre. I watched a beatboxer, then closer to the theatre watched a Elton John and John Denver cover singer (he was really good), and then walked half a block up. The kids were there waiting. I crossed the super crazy busy street, greeted them, and was grateful that I could make it 1.9 miles with no technology and a bad ankle! Turns out, they had spent the last two hours in the same area… at the Shake Shack… where I stood outside watching tourists for 15 minutes! We were so close!

We went in and were directed downstairs to wait for the doors to open. 45 minutes before the show, we got into our seats and waited, and waited, and waited. The kids were tired, so it was fine to wait there… but I was ready for The Show! Here’s a picture of three very tired kids, waiting for the show to start: 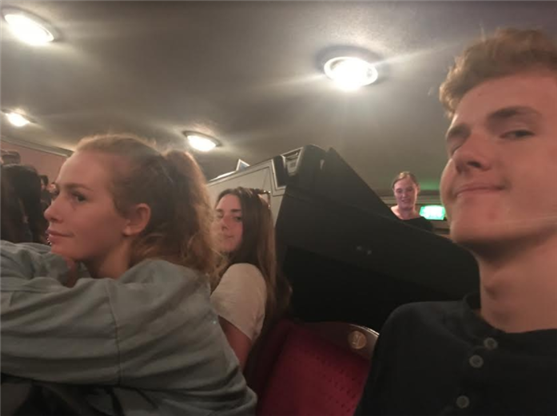 About 30 minutes prior to starting, the live orchestra was doing their last things to make sure they were in tune and ready to go… it was getting exciting. Then, the dull gray backdrop got the Les Mis Cossette face displayed… and we were getting close! 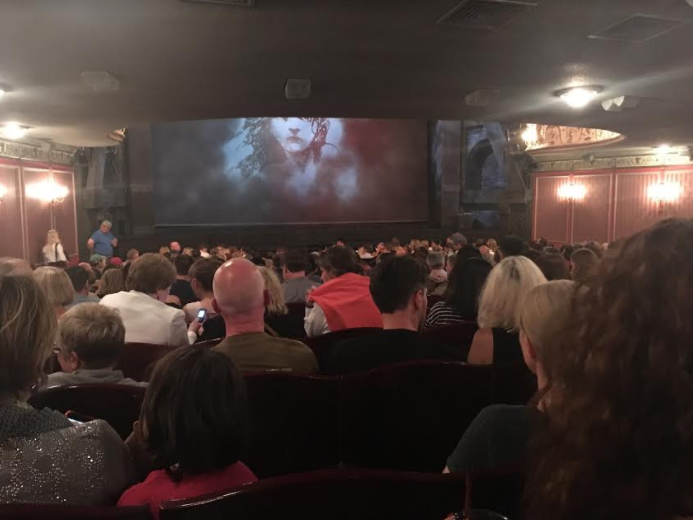 And then, from utter silence to the majestic, loud orchestra, playing the opening piece… it was AWESOME.

What can I say about Les Miserables on stage in London? Worth every penny. I had goosebumps half the time, and even have them now while writing this. The actors were awesome. The stage and set was brilliant (most of the stage was a circle that moved… which helped with any scenes with running, or chaos), the sound was magnificent, and the lighting… I have never before appreciated lighting on a stage, but this lighting was so out of this world amazing.

I have seen the 10th anniversary on Youtube about a dozen (or more) times, and I saw (and didn’t like) the new movie, and I have read the unabridged book… so I was at least ready to understand this and what was happening, and why. But even then, there was at least one new act that I was unfamiliar with.

The whole evening was awesome, and the audience was awesome… goosebumps. BTW, if you go, I paid about $50 per seat, which means we sat almost in the back on the ground floor. We missed a tiny bit of the stage when there were very tall sets that the actors were on, but in my opinion it was no big deal. It was simply awesome.

Here’s a view after the show, of the Queen’s Theatre: 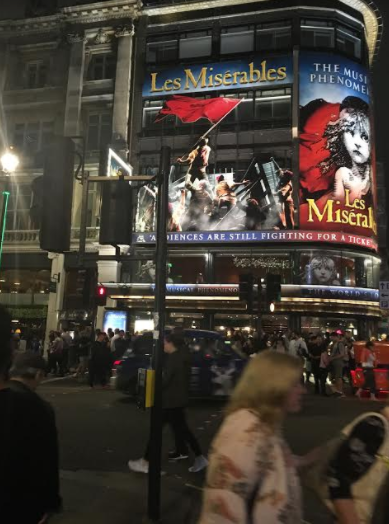 Afterwards we were faced with the decision… do we walk home? Do we uber, or taxi? We were pretty rejuvinated and well rested, so we decided to walk the 1.9 miles home. And you know what? Walking in London at night is delightful. It is peaceful, and the streets are empty. As long as you don’t think about Jack The Ripper, you are good to walk around London at night :p We didn’t get lost (thanks to Ellie’s phone)… it was really a nice ending to a great day.

On the way home we went through the plaza where the street performers were… this guy was there, and I went up immediately and gave him a (long) hug. I’ve seen this type of thing online but haven’t been to a big city with huggers… and I didn’t want to miss out. It was pretty cool: 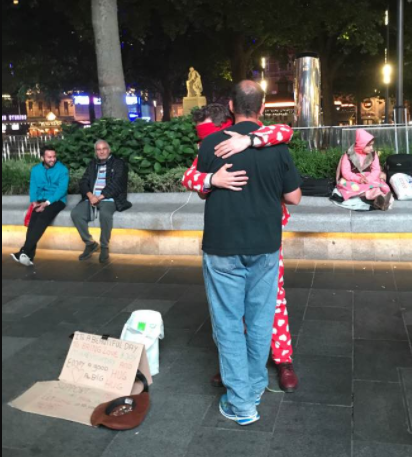 Here are some pictures walking home… it was overcast but not raining, which made for some great pics! 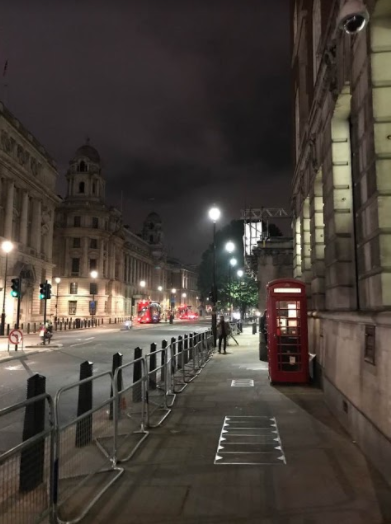 On Facebook I saw this picture, of the three kids I left at home. You always wonder how they are doing, and worry about leaving them (because two of the three really wanted to come on this trip)… but look at those beautiful, happy faces! We love them, and miss them! I’m glad that Grandpa could take the to Idaho for the day to “decorate graves” and then go swimming at Downata Hot Springs. 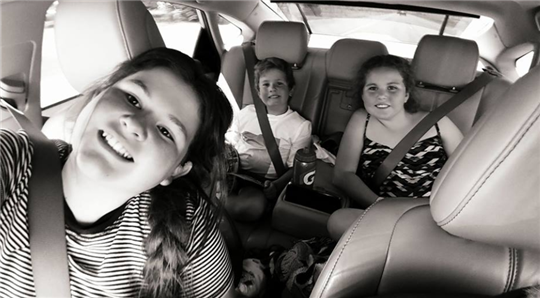 And, here are some of William’s pictures from their day… these are my favorites that he sent me. I think this is Westminster Abbey: 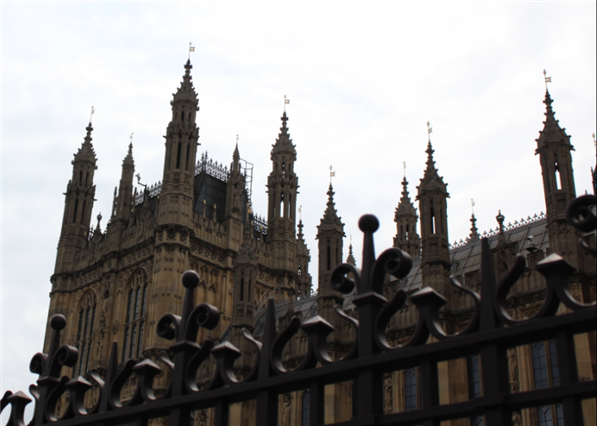 This is a fountain/sculpture shot… I like how he captured the power and passion of this guy: 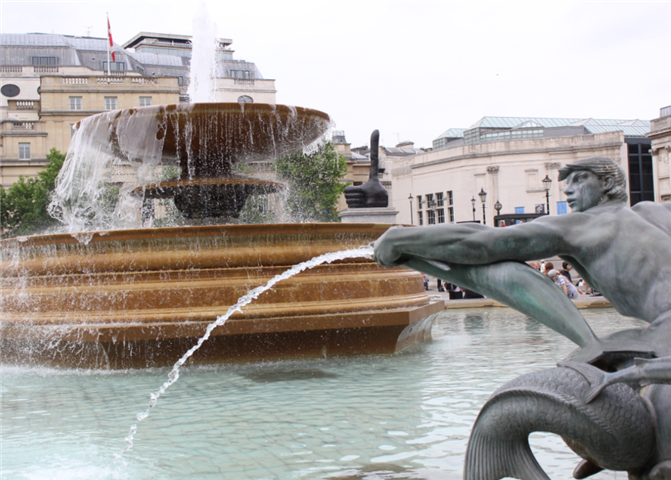 One of the many street performers… they invest a lot into their craft: 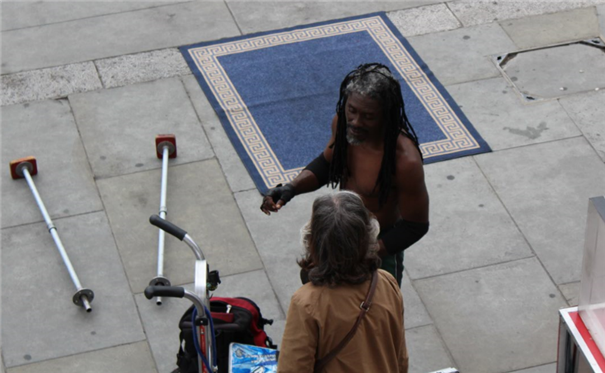 Tomorrow is our last full day in London!! What could we possibly do?