Today we got up really, really early (about 9 something). When I say “we” I mean Samantha knocked on our door to walk us up. She was already dressed and ready for church, and I could barely open my eyes 🙂

While William and I got ready she went down to talk to the front office to see how we could get to church. Turns out everyone at the Temple (missionaries, visitors, etc.) already carpooled there (they left earlier than I leave for church at home (like most people in Utah/Idaho, I live a block away from the church), so our only choice was to get a taxi.

We got to church about 20 minutes late and settled into our seats almost at the back. The speakers were great… the first was a sister who just returned from her mission to Mesa, Arizona, and she mentioned that things there were just so different than what we were used to. Seriously! Different! I really had no idea how different the lives and lifestyles, etc. are!

For Sunday School we stayed in the same seats, and had a great lesson… it was a very interactive group, with lots of comments (and the teacher did a splendid job facilitating the discussion). As usual, it was really neat to have a similar discussion about the same topic that was being taught around the world. For Priesthood, we stood to introduce ourselves and I slipped in “and if anyone is headed back to the Temple, we’d love to get a ride… otherwise we’ll just grab a taxi.”

Immediately a brother named David came up and said he had three of four seats, and he’d be happy to take us home, as he only lived a mile or so from the Temple. GREAT! After the meetings another brother offered to drive us home, too, so we split up and Sam and Ellie went with David and his wife and William and I went with the other couple (serving a mission at the temple, from Wales)… after chatting with some people in the foyer. It was just really a pleasant experience, that was about to get WAY, WAY better.

When we got home Sam said “David invited us to dinner, and then he’d drive us to the train station. But we have to let him know if we want to eat dinner with his family.”

You see, this is my version of an ideal vacation: meeting people who lived there, and hanging out with them, chatting with them, getting to know them. We had no idea just how great our day was going to be. The girls called David and a few minutes later he rolled in to pick us up, then we got to the gate of his 18 acre estate.

David and his family lives in what was a really old hunting lodge which he has renovated and restored to be his home. He is blessed to have some of his adult children and their kids there, so it’s a big family thing… he gave us a tour of his yard and buildings, then a tour of the house, while his wife was preparing dinner for four more people than she had planned for.

What do you eat in England on a beautiful Sunday afternoon? Yorkshore pudding, of course! And peas, of course, and boiled (little) potatoes, with an orange drink and water… for dessert they brought out a platter of popcicles, cups of yogurt, and a bowl of fruit. Mix and match however you like.

We ate outside on the front lawn, at a table that was on a deck (just for the table)… watching the kids jump on the tramp and swim in the pool. We had delightful, fun conversations with the entire family and another guest, and when the drizzle of rain turned into an “almost monsoon” we ran inside the house.

This was seriously one of the highlights of the trip for me, especially in England. Meeting this family, learning about them, being welcomed into their home… it was a real treat that we hope to be able to reciprocate in April when they fly out to visit their son, who lives about 15 minutes away from us!

Here’s a picture of The Trio at dinner, facing the main house: 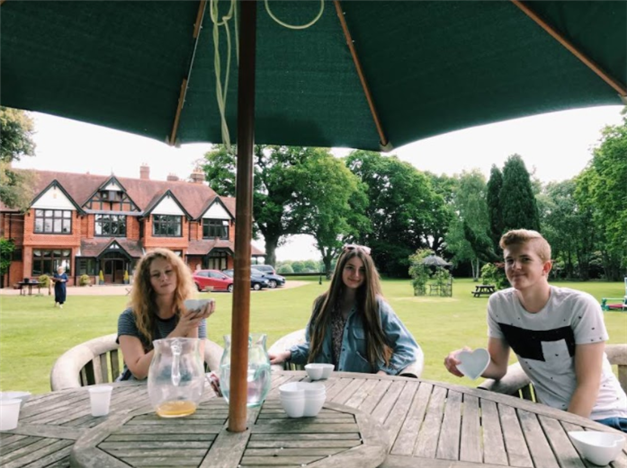 After dinner we rushed back out to the car in the almost-monsoon and David took us a couple miles down to the train station. He even got out of the car and half way walked us into the train station, and got us on our way. We got four tickets to Victoria Station, which was NOT the closest station to our hotel, and then headed up to the platform: 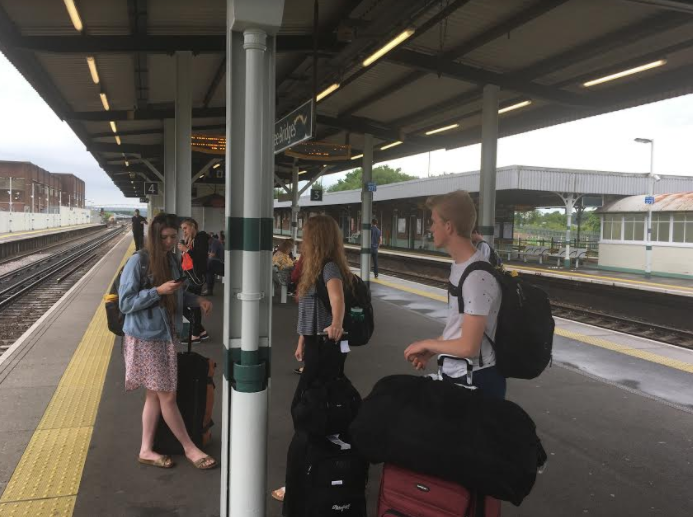 After about fifteen minutes we got on the most crowded train of this trip. We didn’t have to stand, but William grabbed the closest seat and sat by himself (and two big luggage bags) while Ellie, Sam and I sat at a table with a sleeping British girl and had a delightful chat while we trained all the way to London.

We got off at Victoria station and had about a half mile walk to get to our hotel. 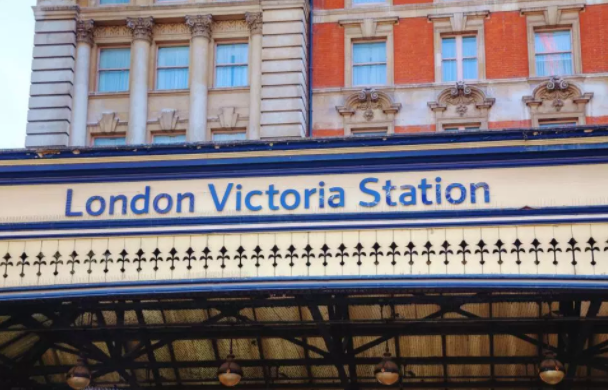 Walking around London with luggage is no big deal because plenty of people do it!

We got to our hotel and checked in… it’s not an expensive hotel ($80 per night divided by four, so hostel prices), so walking up the very small stairs three flights because there is no elevator, using the super small bathroom with a shower that seems like it will overflow into the room (the bathroom is about a foot off the ground, which is hard to get down with a recovering ankle :p)… this room is about as big as two or three master closets… just big enough to have two full size beds in it, and that’s it!

BUT, $80/night in London? Check. No need to uber? Check check! In Amsterdam we spent A LOT of money on uber because our hotel was not in the center of the city… here we are saving a gundle because we can walk almost the entire time.

We were pretty hungry by this time, and anxious to walk around, so we set out to explore and figure out where to eat. We went this way and that (I have no idea where we went, or why we went that way, but I think we were trying to get towards Buckingham Palace) and happened upon an African restaurant that looked good. Sam and Ellie were in Kenya a year ago, so anything African seems okay to them. We go in, have a seat, and then remember that we have to go to the counter to order and pay (as opposed to having a waitress come get our order).

Turns out, this restaurant is African-Portuguese… and it was really good! Here’s a pic of their homepage:

The girls took pics of me and William… we have been working on our poses… what do you think? 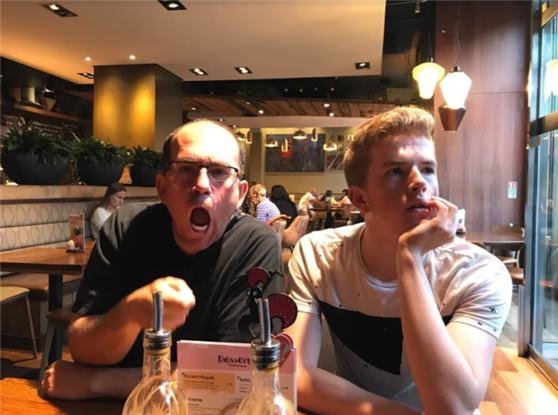 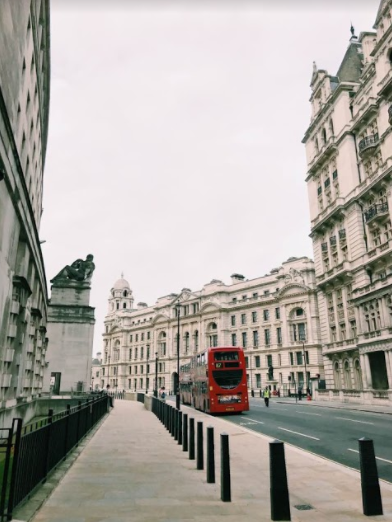 I think we walked about four hours that night. We went to Buckingham Palace (by now it was dark), and down The Mall, past many government buildings, and then finally decided to try to figure out how to get home. Home was cutting through St. Mark’s Park, and then through various dark alleys and through streets, around round abouts, and finally, we found our hotel. Whew! We were exhausted, and my ankle was ready for ice! (that would have to wait.

We went to bed that night well-fed, refreshed, and happy. Tomorrow would be more adventures in London!