Last night was awesome. My wife asked me to get the tooth fairy stuff ready for our six year old, feeling bad that we missed it the night before (nothing like a six year old feeling neglected by the tooth fairy!). She was busy with the baby so I got to do it. I printed the following and gave it to her before I tucked it under the bed (note that he wrote a letter asking what the tooth fairy’s name is, and what the TF does with all the teeth):

Yo Dawg! Donâ€™t you brush your teeth enough? You only have so many before you are using dentures, like (someone’s name)!!

I take all the teeth I get and put them in a blender, to mix them up. And then I sell that to the Elmers Glue factory. 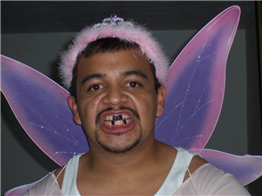 So I go up to the bedroom and give her this cool letter, with fancy writing (that the blog doesn’t recognize) and I had to turn away or my face would give it away. She’s reading it and saying “noooo, noooo, noooooooooooooooooo” … I had her going for about five minutes, she really thought I was going to give it to her. At one point she says:

Are you serious? You really want to put this under his pillow?

and I respond with a manly:

It was a riot – she really believed I was serious. Those precious five minutes 🙂

Here’s the real letter I put under his pillow:

(his name), wow, another tooth? I was just here a few months ago! Sorry about last night, I was caught up with about four million other kids that lost their teeth â€“ September is kind of a busy month for me 🙂

I take all the teeth I get and put them in a secret, special place â€“ itâ€™s so secret, and so special, I canâ€™t even talk about it!

My first name is Tooth and my last name is Fairy. But it sounds kind of weird to call me â€œToothâ€ â€¦so most people just call me The Tooth Fairy! Cool, huh?

See you next time!

Your Friend, the Tooth Fairy 🙂