Eric (my cousin) came over and looked at my beehive about three weeks ago. The goal was to clean it out and fix the mess the bees made (they put honeycomb in the empty slots… which shouldn’t have been empty). Turns out, it was impossible, so his advice (which became Plan B) was to:

Unfortunately, I didn’t get around to it because of the gajillion other things I had going on… so I emailed him a couple of days ago asking him if it was too late. “Call me,” was his reply.  That’s about as good as a girl in Jr. High saying “We need to talk.”  Now we are on to Plan C. The problem is that the bees might not have enough time to do what they need to do to get ready for winter… I wasted three weeks of their prep time.  So, we are going dramatic 🙁 (read, we get no honey, it will be for them this winter).  Plan C is everything in Plan B, plus:

I don’t know how we’ll get the non-framed comb out next spring, but we are leaving it for now.  Of course, if they all die, or leave, it will be easy :/  With that background, here’s my bee project for this morning… total time in hive was about 20 minutes, prep time was another 20 , and wasted time (I didn’t get everything I needed to the hive on the first go), about 5 minutes.  I really hope this works and I have a healthy, active hive in the spring.

Here’s how I start… getting all the places a bee could crawl up (like pant legs) secured. Goofy? Yes. Peace of mind? Definitely. 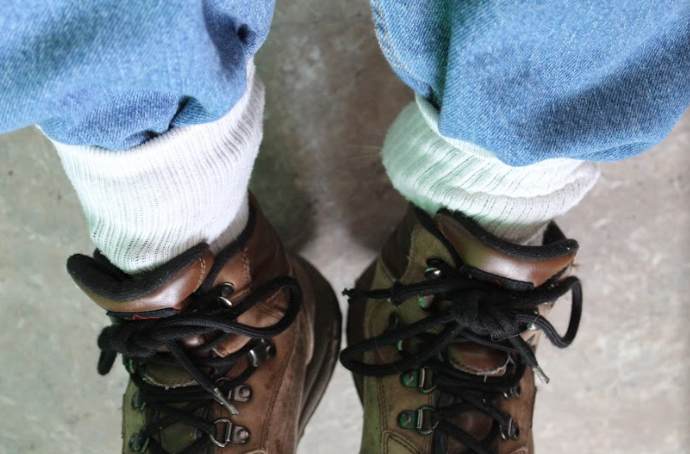 I’m still figuring out where to store my stuff… for now it’s all in a beekeeper spot on a workbench… notice the suit still has the price tag on it. That’s either to impress the bees, or because I might just change my mind and take it back (that won’t happen :p): 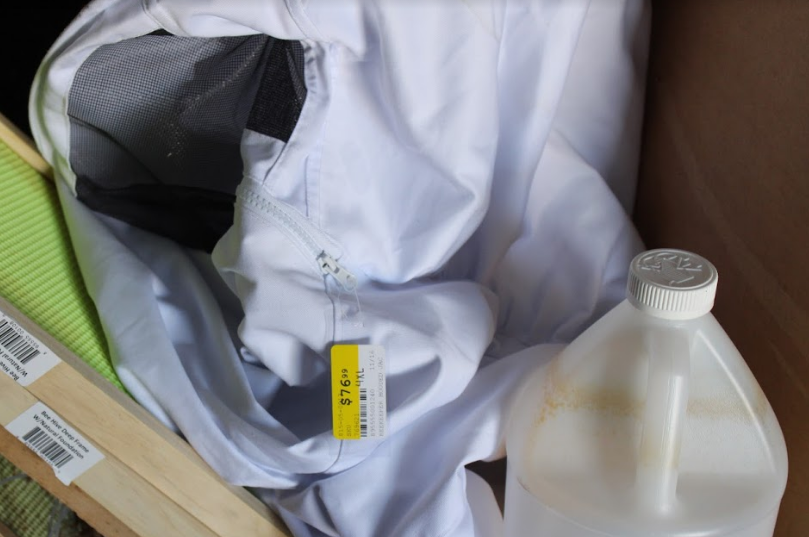 When you are in the bee suit it’s surreal… you are looking out of a screen, with a really big hat, hoping you didn’t miss a zipper. And wondering why the bee doesn’t just sting through it. Catching your shadow every once in a while reminds you of how goofy you look. But hey, peace of mind! 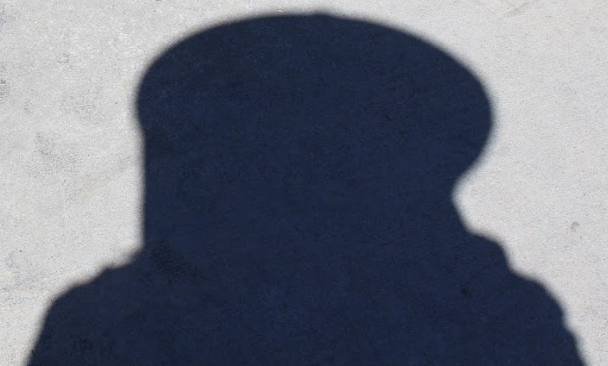 I moved a workbench next to the beehive, since I was going to have to swap and move and stuff… here are some tools I use. The brush is very soft, and you can use it to brush bees away from danger (like, when you move the boxes) or from your clothes, the crowbar thing is to loosen the box and frames because the bees put wax on everything and it’s hard to pull off with your bare hands, and the other thing is a neat tool to help you lift the frames out of the box (it’s very useful, allowing you to use only one hand to get a frame out): 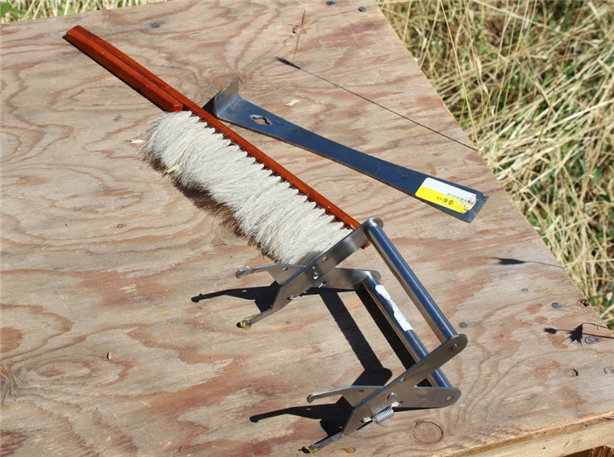 This should be the whole setup… right? Am I missing anything? (Yes, I was missing a smoker or squirt bottle with sugar water).  You can see I had good intentions with the match, and a gallon of fat/sugar so they can make new comb… the frames in that box are new, and right after this picture I removed them and put them on the ground. They would end up in the bottom box, once I took the full frames from that one and put them in the box on the table. 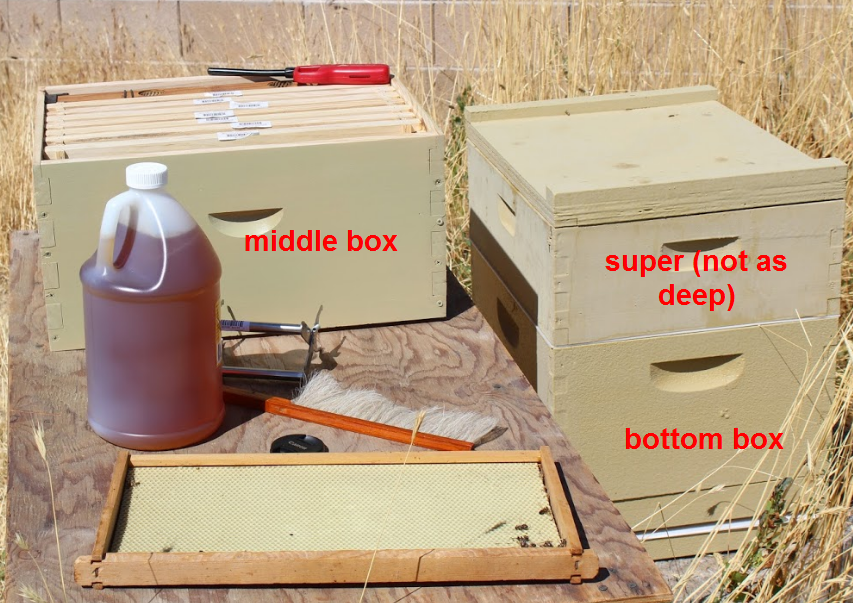 I just finished moving the frames from the bottom box to what will become the middle box, on the table: 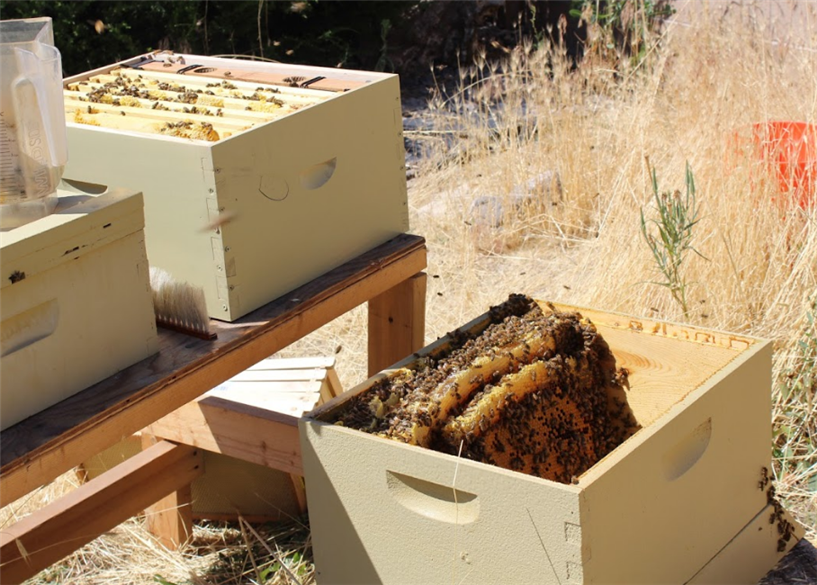 The queen excluder is just laying on the side… the bees should make quick work of this over the next day or two. And here’s the whole reason we are doing this… the honeycomb on the bottom box should not be there, but I didn’t put frames in that spot, and bees are industrious!! I’m leaving this comb in over the winter. To the right are the new frames that hopefully they’ll build out and the queen will lay eggs. 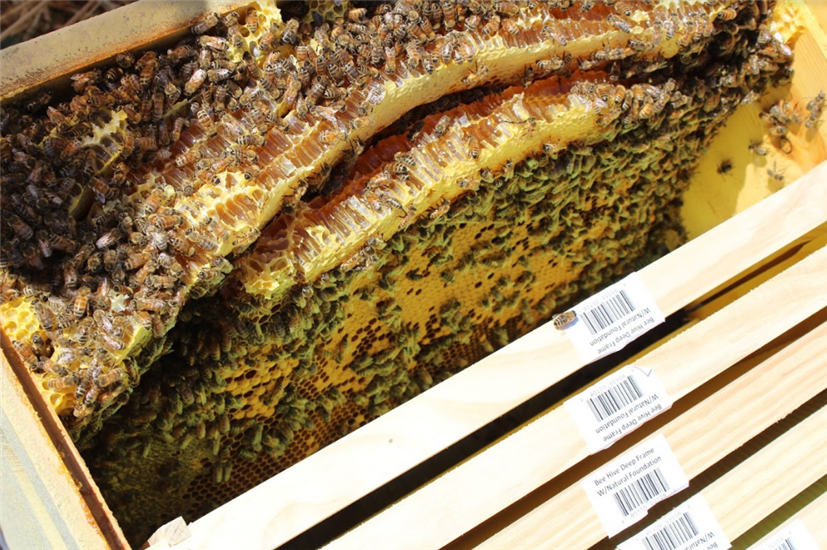 Once I got the middle deep box full of the frames (that used to be in the bottom box, so they were full, and HEAVY), I moved it to it’s spot… these are the bees that stayed behind. Notice the bottom-middle… there’s a big drop of honey that a few bees are working on. 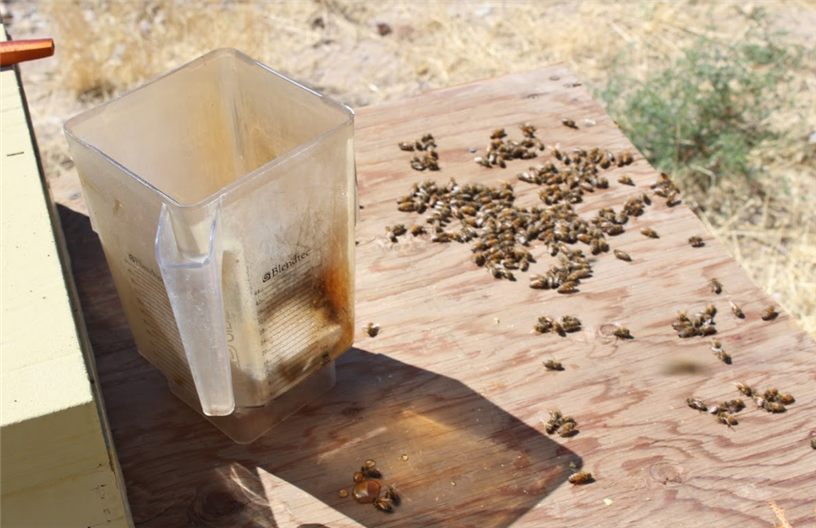 Almost done… the new box is on, the feeder is full (I did this before I opened the hive), and the frames that were on the bottom are now in the middle. And, the extractor is on the side (so the queen can go to any box she wants). 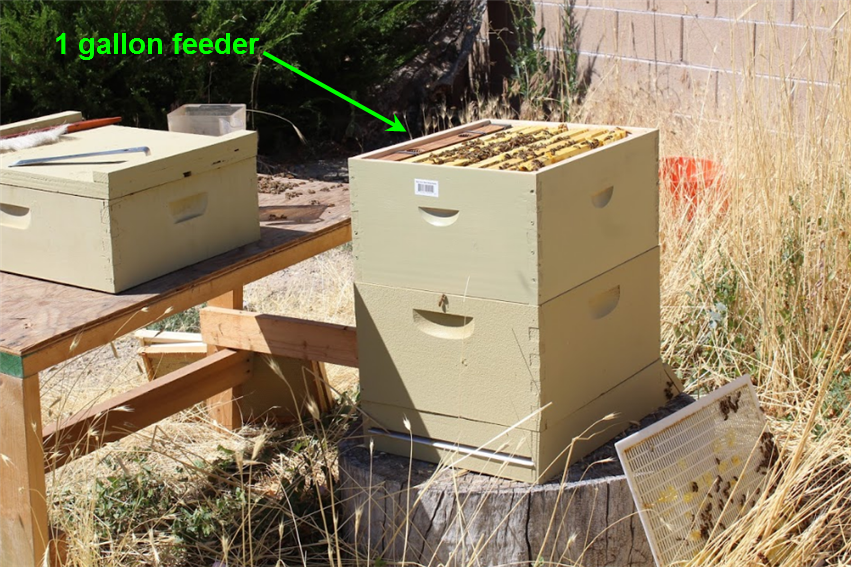 This was my view while I was working… notice the arrow pointing to the extractor. I’m going to leave that there so the bees can clean it up (they take the wax and the honey back to the hive… amazing, isn’t it?): 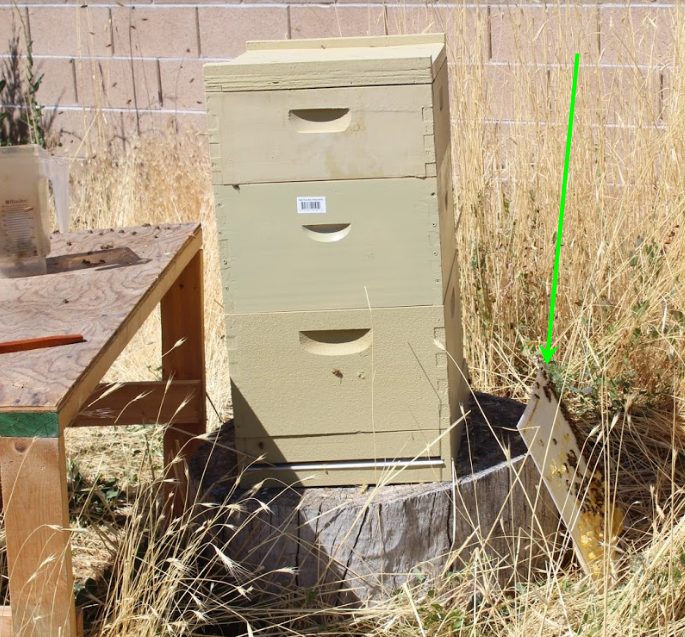 Here’s a rare shot from the front… I didn’t have the smoker or sugar water I should have to calm the bees, so I didn’t go here to work… just for this shot 🙂 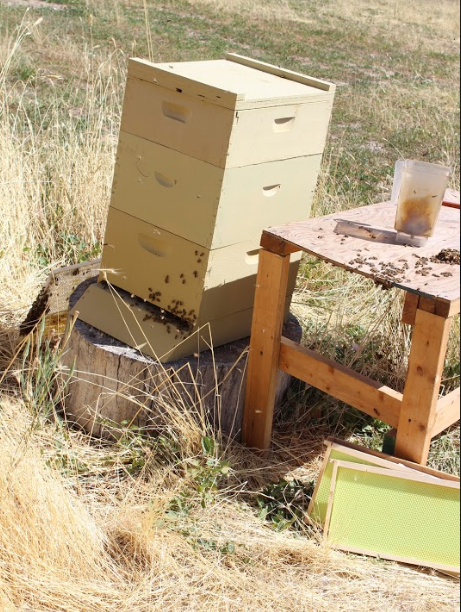 So that’s it… a relatively quick job. Each time I open the hive (I think this is my third time) I get more confident. It’s not as freaky having the bees swarm around me anymore… well, not totally freaky 🙂  One of these days I need to weedwack around the hive, but I’m not going to agitate them anymore today. I’m also leaving the workbench out there because there’s honeycomb about the size of a small fist that they were working on… I’ll let them clean that and then I’ll put the table away.