Well, another day, another beach. Today (Thursday) we go to Tossa de Mar (it has different spellings in Spanish (Castellano) and the language that everything is written in, and everyone here seems to speak (Catalan): 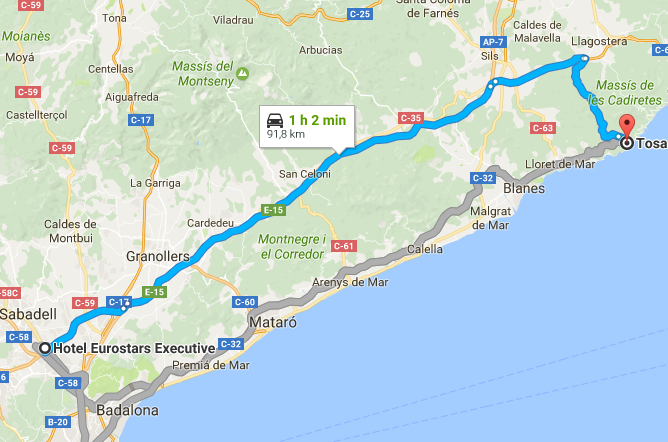 Speaking of Catalan… let me go on a tangent. The first day we were in Barcelona we went to the main “tourist” beach (Barceloneta)… it was the easy one to get to, and we were up for any beach. After that, we went back to our town and looked for a place for dinner.

SURPRISE! No one serves “dinner” after about 4:00. Things are either closed, or they are only serving “tapas,” which are basically Spanish appetizers (and you have to ask which tapas they actually have… too many times we’ve heard “oh, we don’t have that tonight.”)

So we go to this bar/restaurant that we were referred to and the owner gives us a menu in Catalan. It’s apparently a mix of Italian (no surprise, Italy is across the pond), French (France is just a little north of here), and maybe a little Portuguese (depending on who you ask). Supposedly it’s kind of like Spanish, too. To me, it sounds nothing like Spanish.

I say “we have no idea what this menu says… do you have one in Spanish?” “No, but let me look for one in English.” I think about twenty minutes later, after a frantic search, he found a menu in English :p Problem was, the translation to English was not helpful at all… I’d have to get a picture of it but the menu items were almost as confusing in English as they were in Catalan!

I feel a little cheated that I come to Spain, to enjoy seven days of rich Spanish, and it’s predominantly Catalan here (everything written is Catalan).

So we go to Tossa de Mar… or Toz de mar, and found it to be amazing. It is a cala, or little beach, with rocks and stuff (because we are in the Costa Brava region, just like yesterday). This is supposed to be the best place for fish, and snorkeling, and now that we have snorkeling gear, we’re anxious to use it!

Do you remember any of my pictures from this trip, where the roads between buildings (or, blocks) are super duper small? Well, imagine this: We have an uneventful ride up the coast (read: no one got car sick and threatened puking all over)… and the GPS tells us to take a certain exit off of a roundabout (we’ve gone on about four million roundabouts in Spain), and then go down the street, then take a right, then a left… whatever.

Before we know it, we are IN ONE OF THOSE ALLEYS! And it’s late enough in the morning that there are tourists all over! Oh. My. Gosh.

Let me make this more clear… the alley (aka road) that we are on is about as wide as our car… now, fit in some tourists and the merchant racks (because this is meant for people to walk and buy things), and that is what we were driving in!! Ugh… a little stressful. I was surprised that no merchants or tourists shouted at us… they all patiently got out of the way while I hoped that there was a way to get out of this labyrinth without having to have the police escort me!

We did… we made a super sharp turn and then saw a regular road… victory! Success! Craziness! What a nutty experience… the lesson: don’t always trust the GPS.

Once we get to the cala we head to where the snorkeling should be best, which was at the end of the beach, where there were some really cool rock formations. We got this picture from a hillside before we left… this is where we were camped out most of the day: 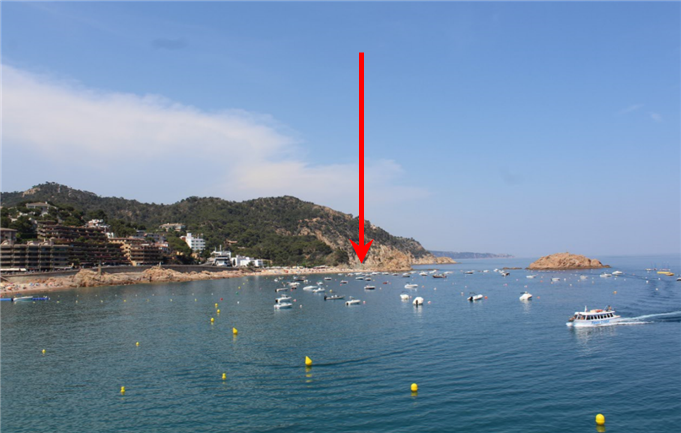 From there, there was a little inlet that was surrounded by rock cliffs on both sides. The water was cold, but pretty clear. The Trio went for a snorkel the other way first, but we found the inlet was the best. I spent probably an hour snorkeling… it has been many, many years since I’ve been able to do this, and it was really quite awesome to do it again! Everyone loved it, but the water was too cold to do it all day… darn.

Here’s a picture of Ellie after she was done in the water… it was really cold! 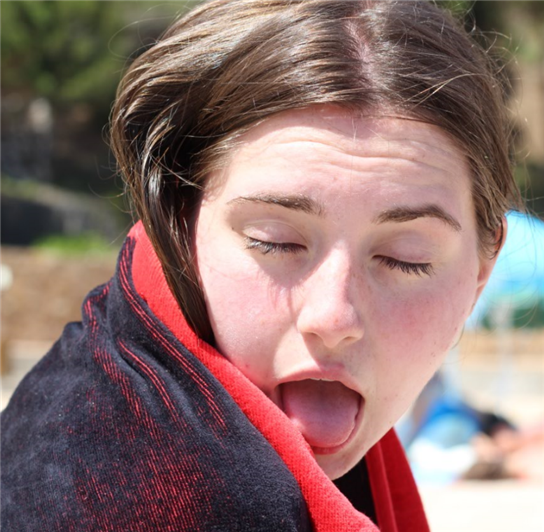 When I got out, the girls had gone to town to go shopping, and William took my sandals to explore the rocks… so I just hung out with our towels for a solid 45 minutes. Unfortunately, while I was gone, a couple (turned out to be boy/girl cousins) was right by our spot… too close… and the guy was really laying into the girl… yelling, telling her a hundred times “I have a job, and all you do is take my money!” I thought they were husband and wife having a divorce talk until I overheard him on the phone saying he was with his cousin… it was so disgusting to hear this macho crap on the beach… what should have been a peaceful afternoon was overheard by at least thirty people… and the female cousin just laughed most of it off, and kept up with the macho guy. Yuck. Finally, he announced “we’re leaving” and they packed up and took off, with her smiling the whole time. Thank goodness.

I went back in the water with William and put my hand in some crevices… you aren’t really supposed to do that, but hey, you only live once! When I ran my hand along the rock walls (underwater) I would scare some shrimp out of their amazing hiding places… they were SO beautiful and cool. I caught one but it jumped out of my hands before I could show William.

I also put my hand on the rock wall, outside of the water, thinking it would be safe there, but when I did I felt something wet and squishy, like an eel or something… I screamed (William thought I was laughing) and then realized it was “just a crab.” Cool… super cool. It was about three inches wide… so of course I caught it and to my delight it didn’t pinch… it just crawled around. I showed it to a little girl from Finland (I later talked to her dad… they are on “holiday” here at their beach house for a few weeks). While I was talking to him I let it crawl all over my arms and then finally let it fall into the water. But, there was only sand, nothing to hide under or grab on to, so it clung to my hairy leg the whole time we were talking. It was pretty cool 🙂

William and I decided to pack up our stuff and walk it to the car… maybe we would find the girls, somehow. Fortunately, we met up with them about halfway to the car. They had the glow of “we just bought clothes in Spain!” look, so that was good 🙂 We dumped all of our stuff at the car and then walked over to this beautiful thing, on the other side of the cala: 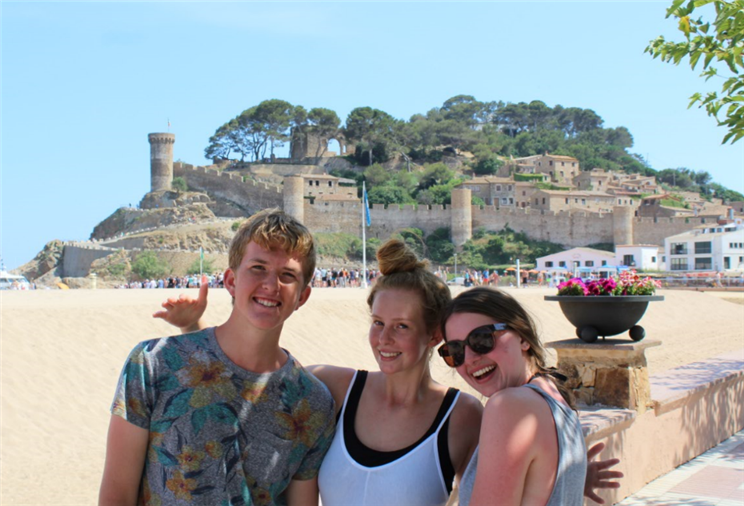 Notice in the picture that Sam’s hands are not on William or Ellie. That is because a few seconds earlier, when her hands were on them, they squealed the squeal of someone with a really bad sunburn :p

This castle was built around 1100, as a sign of protection against invaders. On the way there William spotted a beetle… wait, this was no ordinary beetle… it looks to be some kind of rhinoceros beetle! It was almost the size of my thumb. COOL! 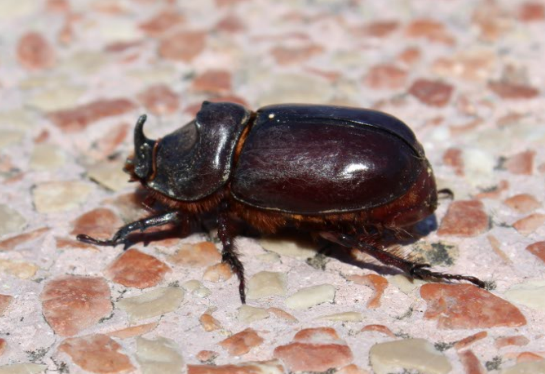 I said “you should let it go… we can’t take it home.” William replied, “yeah, but I’m going to enjoy it as long as I can.” I couldn’t argue with that… so I walk with the Trio and our new companion, the Rhino Beetle 🙂

To get to the Castle you just walk up a really long, switch-backed ramp (see it in the bottom-left of this picture): 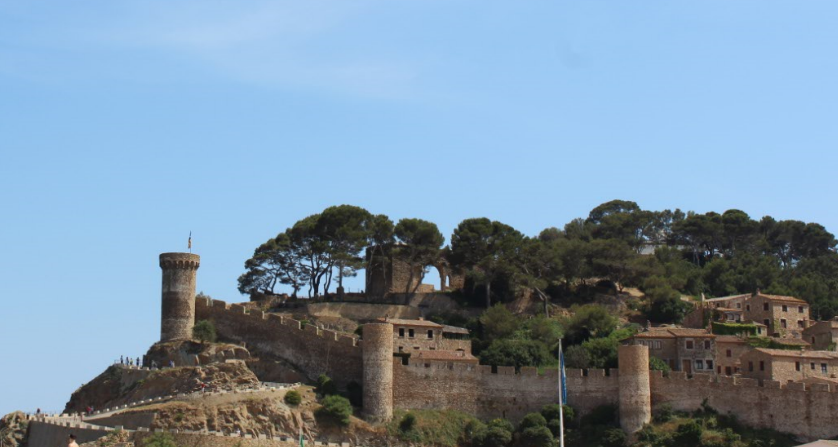 Wait, before I go there, I have to show one more picture of this beetle. William said that seeing one was on his bucketlist… :p Okay, so now we are walking up the ramp, hopeful to see a really neat castle (and wondering how much it will cost). Check out the view, looking up the wall, from the ramp. Can you imagine being a bad guy and having to scale this? The purpose of this fortress was to show that bad guys couldn’t come take over this cute little town. Fortresses should have cannons, right? This is probably a period replica… it was very rusty (and rustic). I looked inside to see if it was cemented, but the whole went all the way down (as far as I could tell): 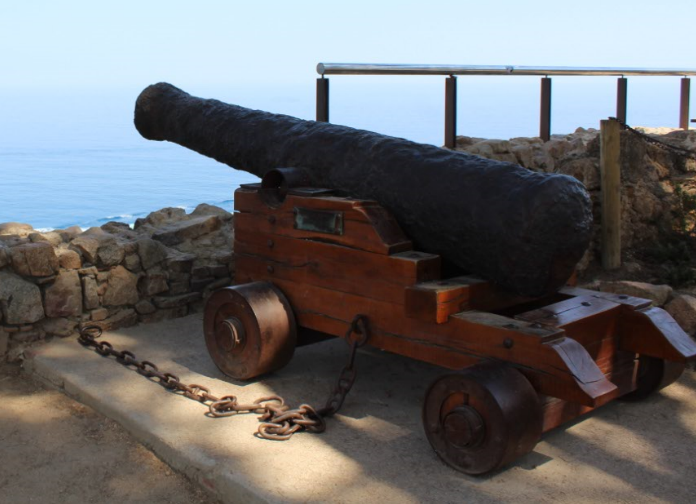 This is a view looking down from about half way up the ramp. Notice the pine trees, super clear water, and the rocks where I’m guessing the bad guys fell when they got shot or hot-oiled: 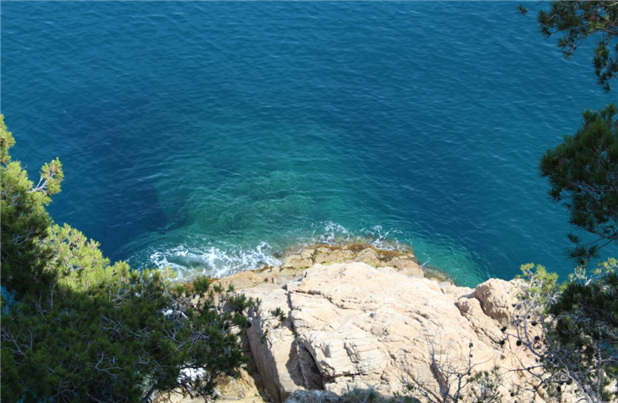 Here’s another awesome view… this, I think, was about right outside the castle entrance (way, way up the ramp). 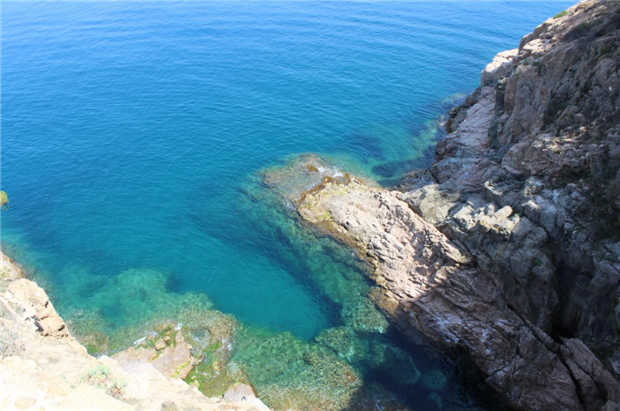 Here’s another view, still climbing up the ramp… of the town (now, not then :p). The Barcelona area is really hilly, like this, and we see a ton of apartment buildings on the hills… remember, no one has an elevator… so lots of stairs. This cliff view is from the castle’s back side… it was very impressive (and had a tiny beach with about ten people on it): Once we got to the top we were (well, I was) disappointed that there wasn’t really a castle… there was a small restaurant and a small building that is now the museum. And that was closed :/ So, we just hung out there, taking in the amazing views… check out what people graffiti up there: This bird landed by us and made a bunch of cool squacky sounds… and then would belt out some kind of long call. The call worked because pretty soon this hot mama showed up: 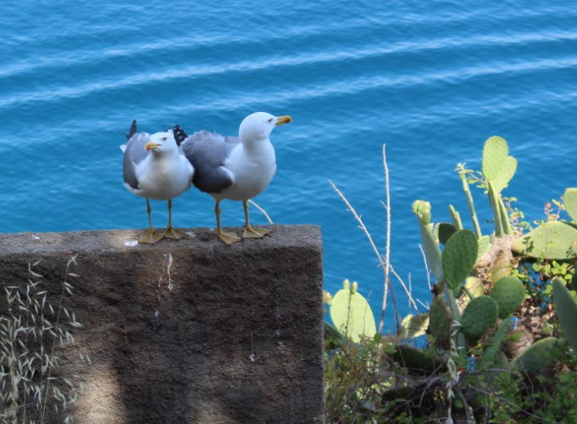 Here is one of the ruins behind the fortress walls… unfortuntely there were no signs to say what the heck it was… my first guess was a church, but then it looks like it has a window from which to shoot bad guys: Well, there was really nothing more to see here, so we descended, paid our parking fee ($18!!), and then headed off in search of a restaurant. We were hopeful, but before we knew it we were on our way home. The girls went to the grocery store and I asked the hotel receptionist where she recommended we eat… she said to go to the main road and we’d find places. Problem was that we went there and found nothing… must have misunderstood her directions. So, embarrassingly, William and I had Burger King (which is better here than in the U.S.).

When we got back to the room, I did some work and he went to hang out with the girls… then, we went to bed and slept really well… well, as well as you can with a bad sunburn.

Tomorrow is our last beach day… hopefully it will be a good one! 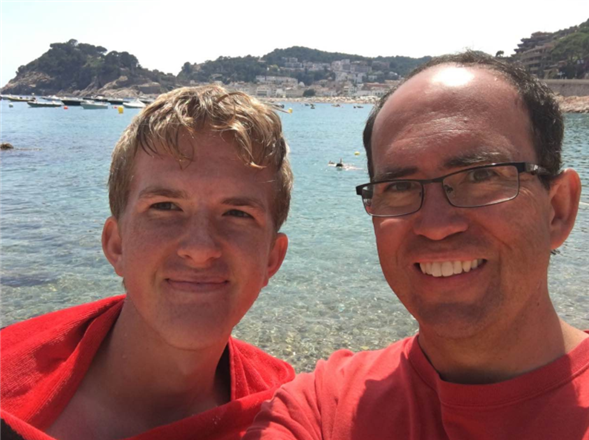