Today was our first full day in Barcelona… we like to take a day to get acclimated a little, explore a little… but la playa was #1 on the list for Barcelona. This has been the place that everyone has been like “_____ is great, but I can’t wait to go to Barcelona!!” Hopefully those high expectations don’t backfire!

I had a 10 a.m. meeting with a JibberJobber user, which was a lot of fun. We talked about doing things to make JibberJobber more Spain-friendly, and the possibility of him being a JibberJobber rep/advocate here (and then in all of Latin America). I have to talk to my team to see what the technical possibilities are of what we would need to do, but it was really fun to talk to a user (that’s always fun) and talk about ideas and growth (again, always fun).

I should mention that we don’t have hardly any pictures of today because we are not taking our cameras to the beach.. we are trying to keep all of the valuables in a tiny bag, so we can keep a close eye on them.

About 30 minutes after my meeting we were off… first stop for me, get directions from the hotel staff. This public transportation system was confusing, partially because of the “theta” they use in Spain… but also because to get to the beach we were going to have to take a train to the main metro station (about 30 minutes), then get on a metro line for just one stop, then another line for two stops, then walk. We were just getting used to Roma’s metro system, and this seemed confusing.

The Trio went to a grocery store next to the hotel to get some food and what-not… and we ate on the .8 mile walk to the train station. We could have taken a bus but that takes longer than walking… so we walked and got to soak in our little town. It’s a cute town, really quiet, and nice people.

When we got to the train station I asked the guy about the T-10 metro ticket, which allows us to ride 10 trips (including multiple changes) for only $20. He started to explain it to me but he was heavy on the theta (barthelona, thero (instead of cero), etc.) and I was upside down. He switched to English and proved to be super helpful. We bought two T-10 tickets and then went to get on the train… BUT we were on the wrong side of the tracks. He walked us all the way around to the other side (that was very cool of him), and his colleague barely got us through the ticket booth right before the train left.

So we go to the end of the train station and then switch to the metro. Barcelona’s underground system is a serious of long walkways that are ramps, stairs, and a lot of diagonal paths… it is very confusing. But, you follow the throngs of people and the signs and next thing you know you are at the right place. We hop on a metro for only 2 stops, then long walks through what seems like a crypt to another line for one stop… on the first metro there were three girls obviously going to the beach and I was like “we follow them!” They didn’t know it but they were the main reason we got to the right line after the first metro.

Once we got out of the metro everyone was going in the same direction: the beach. We found a small store and bought tanning lotion and water, and made our way to the beach. Now people were splitting up… and all roads seemed to lead to the beach. Here’s a road we walked down… there was a maze of roads like this (notice how narrow they are). Apparently it was laundry day… everyone had their clothes hanging to dry. Dryers are rare around here, apparently, and it’s so hot that, who needs them?? 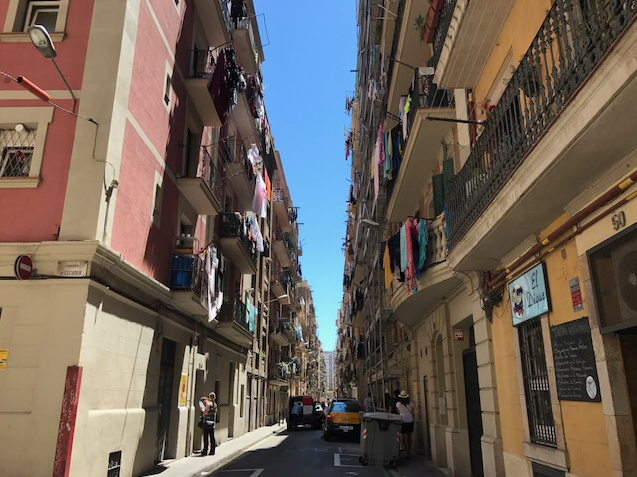 We made it, set out our towels, and then the Trio headed off into the cold water. We spent the next many hours doing any of the following: walking up and down the beach, wading up and down the beach in the cold water (after a while I couldn’t feel my hands), laying on the towels, exploring, looking for rocks or fish, etc. Normal beach stuff. My idea of an awesome beach is either body boarding (which requires no balance skills :p), but this beach didn’t have waves for that, or snorkeling, but there wasn’t any coral here.

Around dinnertime it was time to go hunt down food. I suggested we take the metros and train back so we are not in the tourist area, which probably saved us $20 or $30. On the walk back from the train, to our hotel, I asked a lady “Do you live around here?” “NO!” “Oh, I was just wondering if you could recommend a restaurant for dinner…. like paella?” “Paella, for dinner? No one eats paella for dinner. But if you go up that street, then blah blah blah…” It was clear that indeed she did live around here :p

We found the restaurant she talked about, which was a bar that served food, and got 5 different Tapas… which are really just appetizers. I have heard a lot about Spanish Tapas and was anxious to have this experience… they were all good, but none where good enough to want to order again… except the fried potato pieces that were smothered in some kind of mayonnaise/garlic sauce. If there were one food theme on all of our trip, it would be lots of mayonnaise… everywhere! 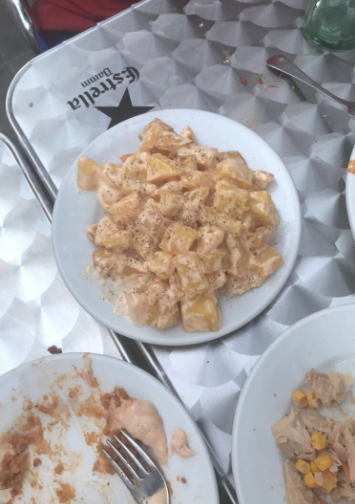 After that we came home, pretty much burnt to a crisp… and called it a night. Between a late night getting in from the airport and a long day under the super hot sun, we were ready for bed.

Oh yeah, one of the greatest things about today was I figured out how our hotel room thermostat works. So now, instead of having a warm room, we are on the path to having a cool room! #minorthingsinlife