NOTE: Will load more pics when I get them from The Trio.

So today is the big, epic day that we get on a train that goes under the sea. WOW! Technology is so amazing, especially considering how old this technology is.

We had to be out of the hotel in London by 10:30… I spent about 45 minutes blogging in the stairwell (by a window, on a chair, it wasn’t *that* bad, but this place was certainly lacking for room, like all big city accommodations), then, at about 10am I went to get the packing going. Everyone was up and packing… it is easy to pack when you are on the road, have a system, and the hotel room is a little bigger than a thimble :p

We checked out and walked a couple of blocks in search of breakfast. Pasta? No thanks. Fish and chips? No thanks. We found this deli that seemed good and oh-my-gosh it was the perfect culinary way to say goodbye to London! We sat at a huge table with other people, El Camino style. The menu was on the chalkboard/wall, and somehow we found room for all our luggage in this tiny cafe.

We got eggs + Spanish chorizo on toast (Spanish chorizo is just a normal not-breakfast sausage… think salami but actually tastes good… it’s nothing like Mexican chorizo), sweet (not savory) french toast which was very thick (like two inches thick) with LOTS of cinnamon (it was actually very good to have that much), and some egg/small tomatoes/toast/avacado/pesto concoction. Really nice way to start the day… and we had plenty of time to be at the train station for our 1:30pm train to Paris. 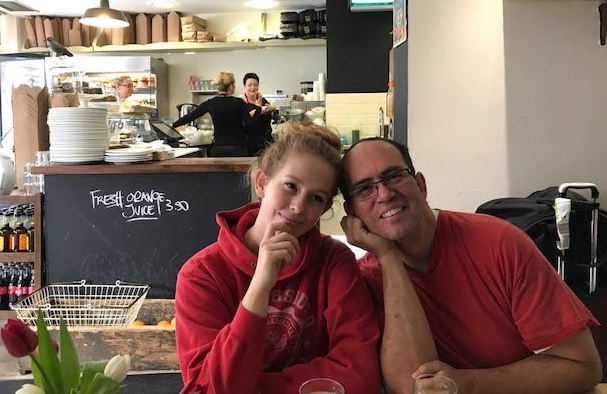 William and Ellie and the menu: 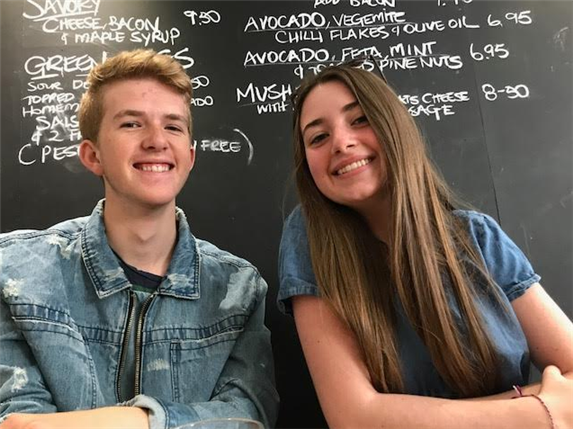 After breakfast we got an uber and took a 30 or 45 minute ride to the train station… our driver was William, again. The first driver, the one who has my phone (maybe has it on ebay by now) was also named William. This William was AWESOME too. Super cool guy. The first part of the chat was okay/normal, but then we got him laughing and telling stories… he told us about a time when he got into a fight (“pulled the guy from his car…!”), and that led to a better story of when someone accused him of cutting him off in traffic, and opened HIS door, and he was like “why did you open my door?” Long story short, he taught us the art of the fight (in his London accent): “You have to give two good pops to the nose!” And then told us how a bystander thought he was going to get marmeladed (think jam… think beat up really bad), but instead he marmeladed the other guy, who was a lot bigger than him.

The whole car was laughing… this guy was awesome.

He dropped us at the St. Pancras International doors, which was great… and across the street from Kings Cross. Have you ever heard of Kings Cross? It’s where platform 9 3/4 is, from Harry Potter. This was too good to pass up… I stayed to watch the bags because we only had about an hour before we should have checked in, so The Trio made a mad dash to look for Platform 9 3/4. They made it, but the line to take pictures was too long, so they just gawked and then came back. Said there was a person there waving a scarf to make it look like whoever was in the picture was running :p

Not my picture… line was too long 🙁

We went through the train security, and then French customs, then waited to get on our train. While waiting, a group of guys for a professional sports team stood by us… they were HUGE. MASSIVE. I have no idea what sport they played, but it’s amazing to be around people who are so massive.

Finally, it was time to get on the train… we made our way to Coach 6, seats 83/84 and 93/94, and settled in for a very long, tiring train ride. The part under the water is only about 50 kilometers, the rest is either English landscape (grass, fields, warehouses) or French landscape (lots of fields and farmhouses)… it was beautiful, of course, and very green, but man I was tired. Sleeping on a plain/train is not as fun as it sounds, especially if you are as tall as I am (and I’m not very tall).

About three hours later we pulled into the Gare Du Nord station in Paris!! We made it! Wow… another country, another adventure. This was significant because it kind of marks the half way point in our trip… we’ve been to three of the six countries! We still have 19 days to go, but it’s kind of half-way.

Not my picture… and we didn’t arrive at night :p

The girls go off to find a bathroom but when they come back they said “you have to pay to use it.” Boy how we miss free bathrooms. Here, in many tourist areas, it is “Pay to Pee.” I should trademark that in multiple languages.

We go outside and try to find a place without taxis, or at least a place that is somewhat calm, so our uber driver could park and pick us up. This was nearly impossible. We went from the super busy train station entrance to a super busy little island in the middle of crazy busy roads… there really was not a good place to have this guy pick us up! Luckily he called and said “meet at the xyz hotel. It’s right where you say you are!” We looked and looked and saw various hotels, but not the XYZ hotel. Turns out, it was on the sign right above us :p So much for being good at looking!

Finally, we see him waving us down from across the street and have a great feeling of relief… whew! We are on to the next leg of this travel day! We get in the car, confirm the address, and head out for an our drive. Big towns are really quite a pain. And, they aren’t as beautiful to drive through as the travel brochures make them out to be 🙂

This guy was from Morroco, and has been in Paris for almost twenty years. He was a professional volleyball player, and was very, very cool to talk to. His English was good enough, but we have now entered the part of the trip where we find ourselves saying “sorry, do you speak English?”

He dropped us off at the apartmenthotel and we went in… only to find out that this was not our hotel 🙁 🙁 🙁 In my haste to get out of the home office, I noted down the wrong hotel (the one I didn’t choose), as where we should go. So after a very long day of travel, and driving through Paris for an hour, we were still an hour away 🙁 Darnit. That was my bad, for sure.

Another uber driver…. this one was nice but spoke no English. An hour of quiet… sleeping kids in the backseat, and driving through the non-beautiful part of Paris. I was in and out, and finally we go to the hotel address… but there was not signage that was obvious! So we drove around in a circle, he called the front desk, and eventually ended up in the same place, only to finally see the signage. This is like a hotel/apartment… it’s really nice (two rooms… a queen bed and a pullout bed, and a door to close of the foyer and a bathroom. Also, we have a kitchenette… first time, so that’s nice! Alas, we are just glad to be here, and not travelling!

But we are hungry. Maybe a little hangry. We haven’t eaten since breakfast in London, and travel sure wears you out. The front desk lady said to walk down five minutes and there is a pizza shop. Pizza in Paris… whatever, we were starving. We pass a Chinese restaurant (no temptation there) and go to the Pizza shop. The restaurant part is empty, and no server or anyone is there, so we go up two stairs to the bar section and the bartender (owner?) says “we don’t have pizza.” “Do you have any food?” “We have meats and … ” who knows what else… English isn’t a big thing around these parts… he says “go down more and there’s a place with pizza and everything!” 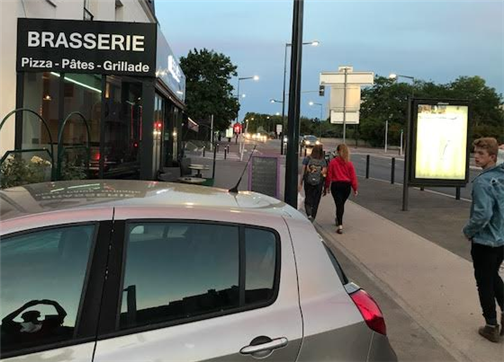 No pizza at this pizza shop.

So we go down more and see a restaurant that has a sign out for pizza. Never in our lives have we wanted pizza more than now. We go in and talk to the lady, who speaks no English but is happy to seat us… we chose a seat outside because we are in PARIS(!!) and then look at the menu.

Here’s how you read a menu in Paris: Pull out your phone and google translate everything. It was very confusing. Ellie and Sam regretted not listening to the French tapes they got right before the trip… now were were totally unprepared!

They bring out the appetizers… bread (of course), hominy beans, red super spicy sauce, and golden raisins that were half-grapes-half-raisins. They were SOOOO good, and served warm. 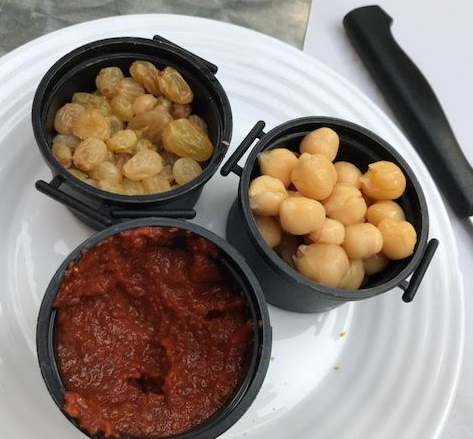 William and I went “safe” and got burgers and fries, Paris style. This was very elegant, with blue cheese that had all kinds of coloring (what are those blue and gray colors anyway? Don’t answer that!), and some canadian bacon (aka ham-like stuff) on it. 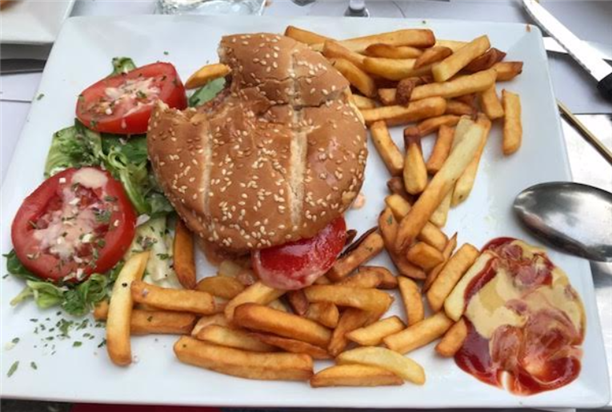 The girls got chicken couscous, which was the most amazing thing. First comes a big bowl of tiny couscous (smaller than in the states), and then a huge bowl of some AWESOME red-based vegetable soup… apparently that goes on top of the couscous. 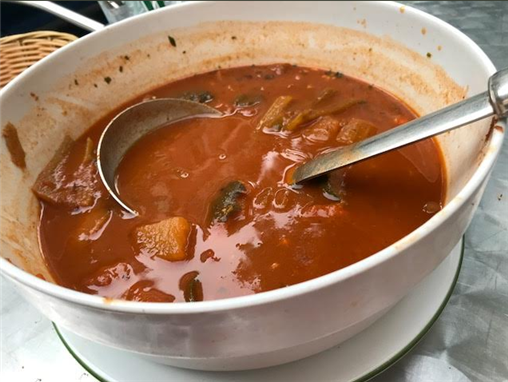 About ten minutes later they bring out a plate with chicken, and some north-African sausage that didn’t pass the taste test by anyone (it was very lamb-y, and to me, tasted like lamb jerky).

This is their food without the chicken: 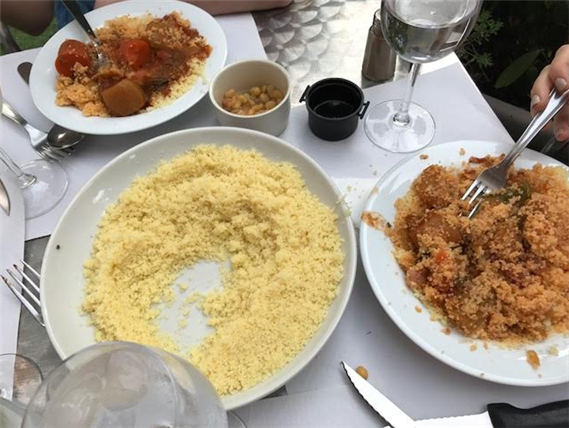 Ellie had an okay view :p 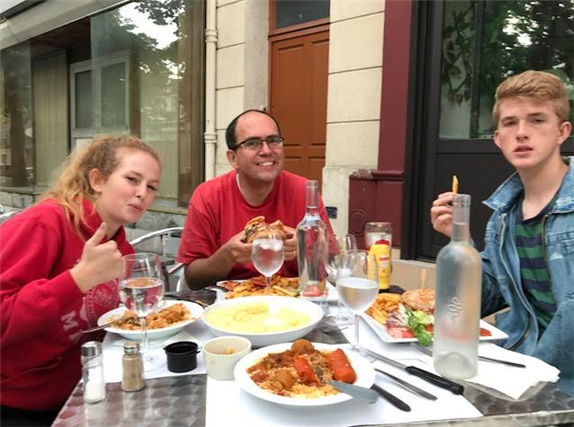 Overall, the food was very different, and VERY, VERY good. Of course. What else would you expect from Paris? We ate, and rested, and sat, and wondered when the bill would come. Finally, we got the bill and were on our way (without doggy bags, unfortunately. I don’t think they do that here).

On our way home we found a little market where we bought some snacks and food for the hotel. Check out these pringles cans… this is futbol country! 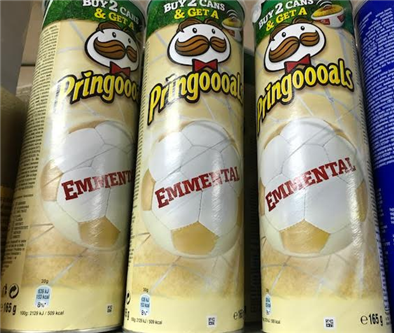 We went home and pretty much crashed. It was a long, long, long day, and we’re excited to get it all in while in Paris.

Travel days are my least favorite part of this whole thing… but we’re here, and we’re safe, and ready for Versailles tomorrow!