NOTE: I don’t have any of my own pics because my phone is, um… well, it’s on the passenger seat of the uber we took last night. Oops!

I got up around 9:30 or 10:30 (maybe it was 11:30??) and got ready, then went down to the lobby to see if there was a shuttle coming for the Techorama conference. I hadn’t seen an email about it but the night before I heard they would do hourly shuttles. I met a guy outside who was also a speaker waiting for the shuttle, and within minutes we were on our way. He was from Germany with terrific English, and we had a fun chat on the 10 or 15 minute ride to the event center.

I was again so impressed with how amazing this conference was run. All by volunteers, and for 1,500 people. Here’s a pic of the front of the theater… it was HUGE: 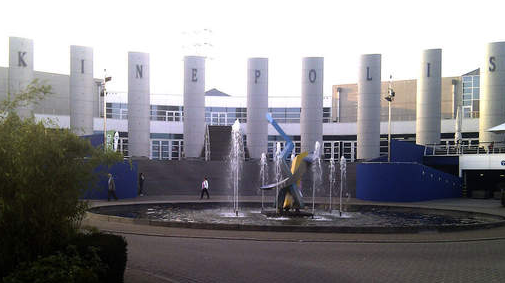 I made my way to the speaker’s room, which was a quietish area like a college library. People were working on their next presentations, and sometimes the nervous energy erupted in loud chatting, joke telling, story telling, culture comparing, etc. Being in a speaker’s room is pretty amazing, where you are with experts in their field, many of which are seasoned speakers and travelers, with incredible backgrounds and stories.

My presentation on Personal Branding for Geeks was coming together, and I was mostly finessing the slides so every color, font, animation, etc. was perfect. This has turned out to be one of my most favorite presentations!

I didn’t have breakfast (it closed at 10am at the hotel), and the only food in the speaker’s room was brownies, some kind of cake with jelly on top, and Belgium chocolates. There were sodas and water in the fridge, but interestingly the fridge was not really turned up… it was just a little colder than room tempurature. I like my drinks cold cold… not warm cold 🙂

Lunch was pizza… there were other things but that was the only thing that grabbed my attention. I was on at 4:30 and knew I needed to eat, but wasn’t feeling like eating.

The next few hours passed quickly, with preparing and chatting with the other speakers, and then at 4:30 I was on again wondering if my audience would be me plus one other person. The day before I had maybe 15 or 20 people… ten minutes before my presentation I had about ten people already! That was a big change! It’s amazing how the title of a topic will have an impact on the audience you draw. 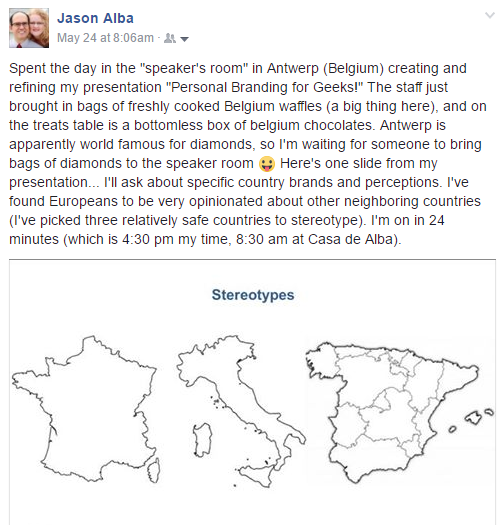 By the time I started, I had about 50 or so people, and others trickled in during my presentation. The day before was a quiet audience (apparently standard for Europe, and I heard it got quieter the further south you went), so this time I did audience involvement right away: “let’s stereotype! What can you tell me about the people in these three countries, which I’m about to visit?” Boy, that got it started! People had a lot to share about the French, Italians, and Spanish! More importantly, it set the culture of my room, and it was a chatty, contributing group during the whole presentation! Awesome!

It’s always fun to get positive feedback… here are some tweets that the audience sent out: 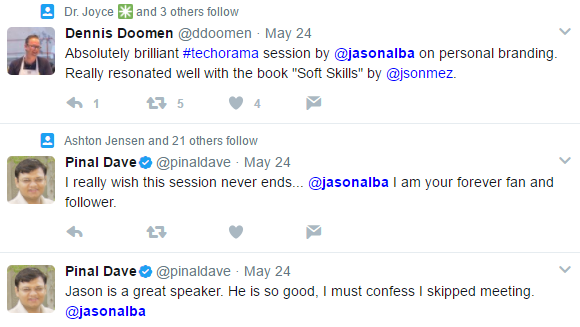 It’s been a long time since someone has tweeted about my presentations, so that was nice… thanks to all that went to my sessions.

After the session I got to talk to some attendees, which was cool. Most of the attendees were from Belgium, and I’ll tell you, this is a very smart bunch of tech professionals. And really quite nice. It’s amazing what the world of work looks like now, with people able to work with customers around the world.

I went outside to grab the speaker shuttle back to the hotel… it wasn’t there yet, and a few speakers went in a cab to the hotel. I’d wait for the next one, with my friend Pinal Dave from India… “it should be there in a few minutes.” I think “a few minutes became an hour” of standing around. But the conversation was great. It was really good to catch up with Pinal, who does amazing things with databases, specifically optimizing them. I love his business model and his customer focus, and learned a lot from him. We talked about country and cultural differences, and he told me about some of his adventures in getting visas to travel from India (really hard to do, to some countries), and he educated me on the finer points of the British colonization of India, from an Indian’s perspective. Very interesting.

When I got to the hotel the Travelling Trio was there, waiting for me. I think it was around 8pm… and we set off to check out the castle. “See Castles” was #1 on my list in Belgium, since they supposedly have the highest number of castles to square miles in Europe… but I was doing conference stuff the whole time so far. So the kids had waited to see this one with me, which was cool.

We walked about a half hour through town, passing a bunch of closed stores and restaurants (which all apparently closed at 6pm), and got into the heart of old town, where everything was open, and lots of people were enjoying dinner. It really was amazing to go through the streets surrounded by huge, old buildings… I see pictures of this type of things from my friends (and even from this trip), but being here, with hundreds and hundreds and hundreds of years of history, is so amazing. Here are some pics from William (can you see how different the buildings/architecture is than from The Netherlands?? 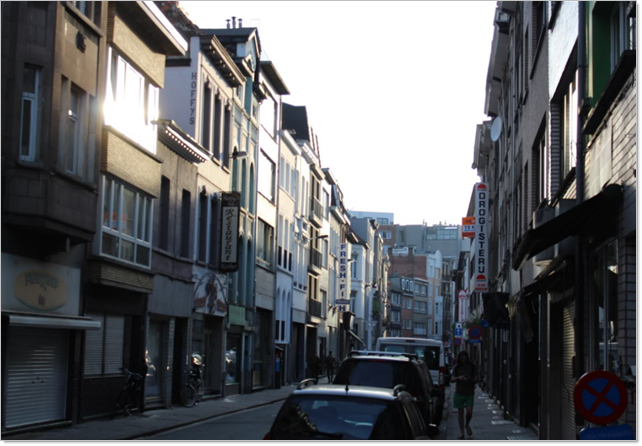 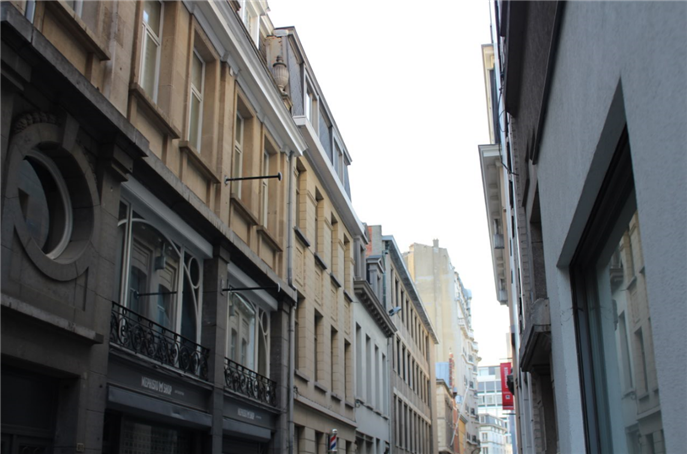 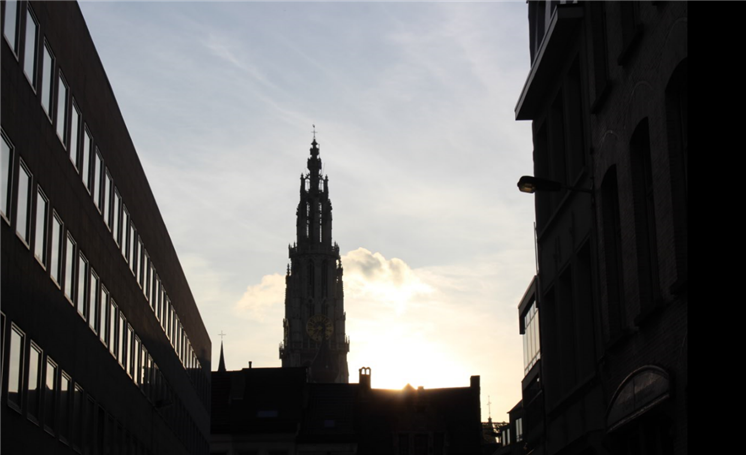 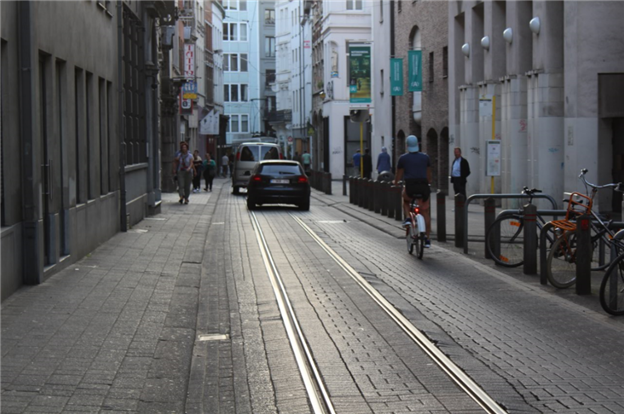 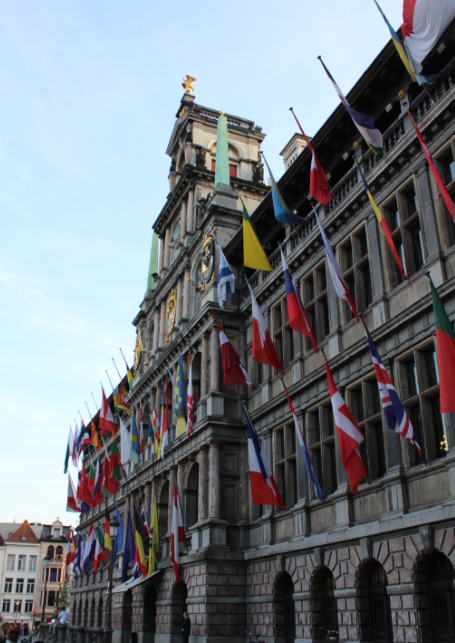 We got to the castle, which was really quite small, and had a (closed) restaurant inside, but were able to walk around the outside. 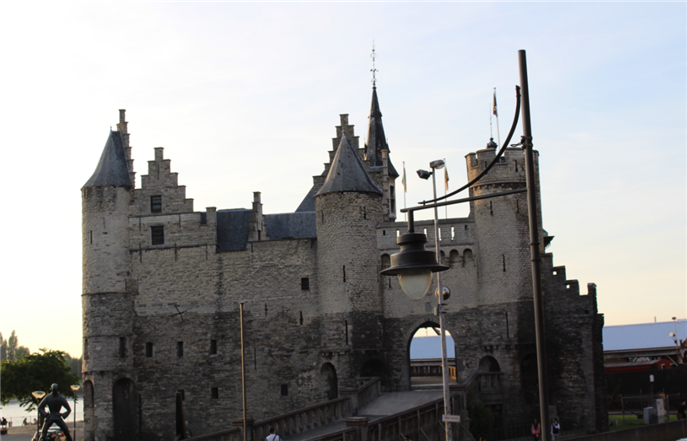 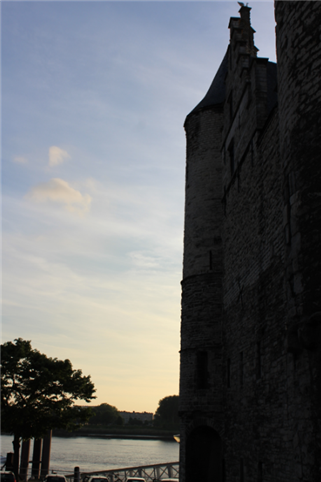 On the other side of the castle was some kind of walkway, along the river, and there were plenty of people lounging on the edge of the river on a cement wall about 10 or so feet from the water. It was relaxed and jovial… a chill night in Anterwepen. (Not my picture, this is from google images) 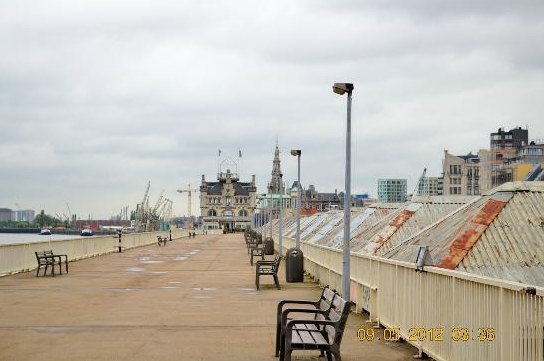 We saw a huge sailboat that looked like a pirate ship, and there was some Japanese celebrity that was being filmed for part of a documentary about Van Gogh (apparently he lived in Antwerpen for three months), and got lots of pics. The kids did their dance twice… once on the walkway and once in the courtyard of the castle. It was fun and funny :p

Here are a couple more cool pics from William: 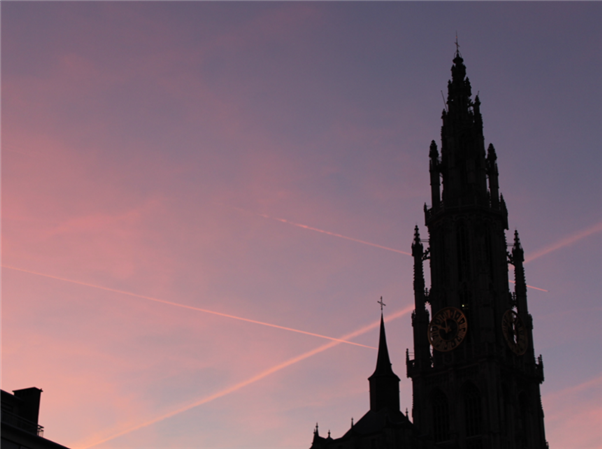 We wound our way home and got in around 10:30 or 11… much later than normal, but it was my only two hours walking around Belgium! When we got in I needed to see if we could find closer hotel/arrangements to where we wanted to be in London. Turns out flying into Heathrow is not ideal because it’s on the far north-west corner, away from the city… and we were planning on staying at the LDS London Temple accomodations, which are about 40 miles south of London (perhaps a 1.5 hour trip from Heathrow). Yuck 🙁 And, what we learned in Amsterdam was the further we are from where we want to be, the more it would cost to get there (like, hundreds of dollars!).

So, that night I spent time on airbnb looking for a place. I found two, and narrowed it down to one… one that would be about 20 minutes by train into town. That was fast, inexpensive, and convenient.

My experience with airbnb was NOT fast or convenient. Long story short, I stayed up until 2am trying to get my account set up, with my passport and then drivers license pictures…that was a nightmare! Their phone app to take pics is not intuitive at all, and using my laptop camera proved to be a mess…. the pics got rejected multiple times, and I was getting more and more tired/frustrated. What should have taken five minutes took hours, and I needed to get to bed!

Alas, I got the account set up and the reservation done, and hoped that Dave, our host, would reply when when woke up saying that yes, we could stay at his place. Then, me and William went to bed (the girls were already out by that time).

It was a long and rewarding day. My presentation went great, I got great feedback, and I was done with worrying about it. Walking the town with my three European besties was fun, and I finally felt good about the accomodations for the next six nights in London.