Today we got up “early” (me at 8, Ellie and William and Sam by 8:30) and packed and were downstairs waiting for our Uber to the bus station by 9am. It hurt so bad to wake up that early :/ So much for coming here early to get over jetlag!

Sam had packed the night before so she had time to make us PB&J sandwiches. The bread here is “soft in the middle, but really hard on the outside.” I settled the hotel bill and then printed the bus tickets (thank goodness! There wasn’t really a “station” to print tickets, just some benches on the sidewalk! Come prepared!) We got to the bus station to take our Flixbus to Antwerp. It cost a whole 16 euros per person… this was the cheapest travel day we had yet! We got on a double-decker bus, like below (no, I didn’t not take that picture :p), and since we could we went to the second floor. It was fun being so high up.

At the bus stop we met a couple of engineers who had just graduated from somewhere in or around Canada. They were really cool. They are spending 2.5 months in Europe, then will spend 2.5 months in Southeast Asia… truly “backpacking” around Europe (nothing more than one backpack each) and staying at hostels. It’s fun to meet all of the world travelers (and (a) realize that we are world travelers, and (b) realize that they will likely not meet any or many others from Utah (which according to one uber driver is by Alaska (yes, a little south of Alaska) and by another driver as by Washington D.C. (yes, just a little west of Washington D.C.).

This is a picture from our seat before we left. It’s looking down one floor/story, and into the whatever-it-was station: 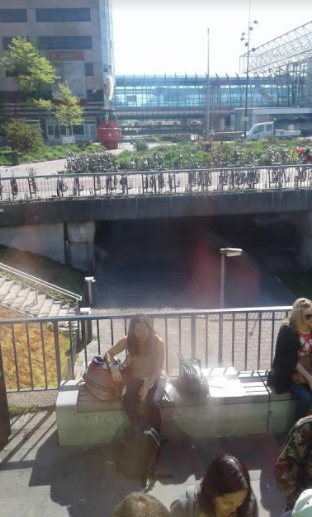 The bus ride was delightful, the country side was fun to watch, but the eyelids were too heavy! I napped a couple of times on the bus… and then 2.5 hours later we arrived to Antwerp. It took about 10 or 15 minutes to get through town, and my first impression was that there is A LOT of construction going on here. In Holland we say new-age windmills (and like three old ones), but Antwerp’s skyline was filled with building cranes: 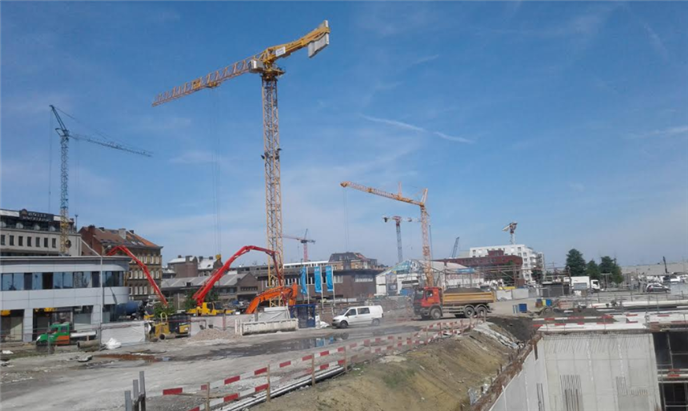 Finally, we got to the bus station in Antwerp (or, as they say, Antwerpen). We got off the bus at this amazing building (I think this is the train or subway station): 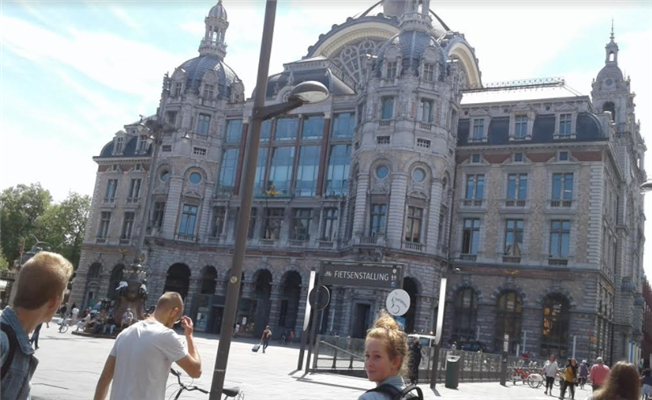 Fortunately, our hotel (the Lindner) was very close to where the bus dropped us off… I think one kilometer. Once we figured that out we used Ellie’s phone and Google Maps to get us to the right place. Whew! Crisis averted!

I should note that William suggested I put my laptop bag in my suitcase and then he pull that, while putting his dufflebag on top. Easy for him, and super duper easy for me (I just carried his camera bag). That was really awesome considering my ankle was feeling tight.

On the very short walk to our hotel we walked by the diamond district… apparently diamonds is big business in Belgium, and there were plenty of stores where we could stock up on these rocks. When I say “we,” I mean “other people,” as per this sign: 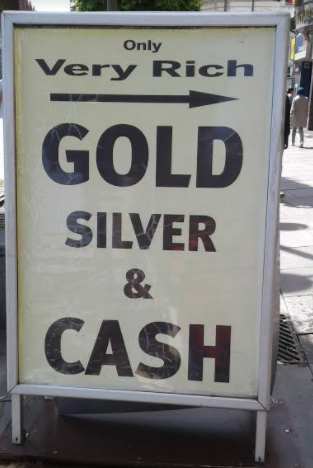 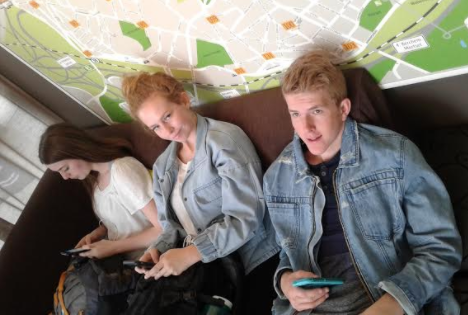 We set out to explore the city and get a proper lunch. What do you eat on your first day in Belgium? Chinese, of course! Ellie found a Chinese restaurant online and we started walking. Two things struck out at us: First, this was a different city with different architecture than Amsterdam. Second, the neighborhood we walked in was the Jewish neighborhood… lots of orthodox Jews walking and biking around. To see this neighborhood rich with Jewish families and people was really a neat experience, especially thinking about the history from WWII, and how the Jews were treated. <-- understatement Here's a street view of our walk (turns out Ellie is a naturally fast walker, while my ankle has really slowed me down): 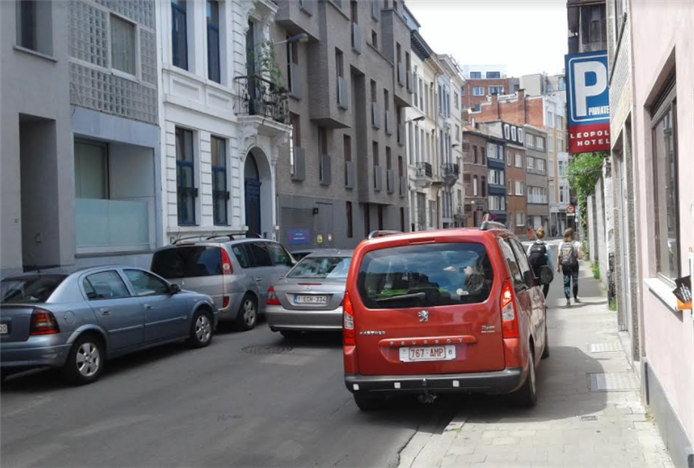 The restaurant was, how do you say, EXPENSIVE! Sweet and sour chicken was seventeen euros (and it was really a serving big enough for one person (and, the sweet and sour was very different)) and noodles and vegetables were eight euros (that was really, really good). By now we all knew not to order water (you get a very small bottle for 2.50 euros)… Here’s a funny view from our table… see what’s in that van? LOL 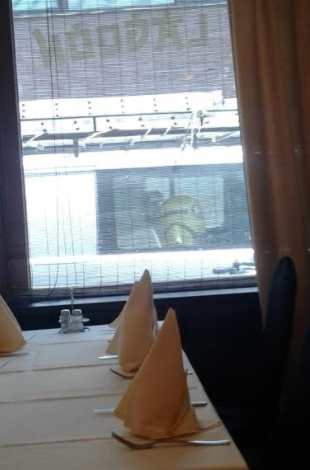 SIDETRACK: I am actually writing this the next day (surprise!). Today I was at the conference (more on that in the next post) which is at a movie theater / event center, and Despicable Me had a trailer playing… I realized that if you live in Europe and people with strong Russian accents, the “bad guy” isn’t as funny as he is in the U.S., where the accent adds a lot. Around here there are so many accents that it’s not anything special or weird.

Back to Antwerp… we were still hungry so we went to the bakery that we had passed on the way to the Chinese restaurant. This was smaller and not as fancy as the bakeries we say in Amsterdam, but man the food was GOOD (and inexpensive!)! Here’s a shot: 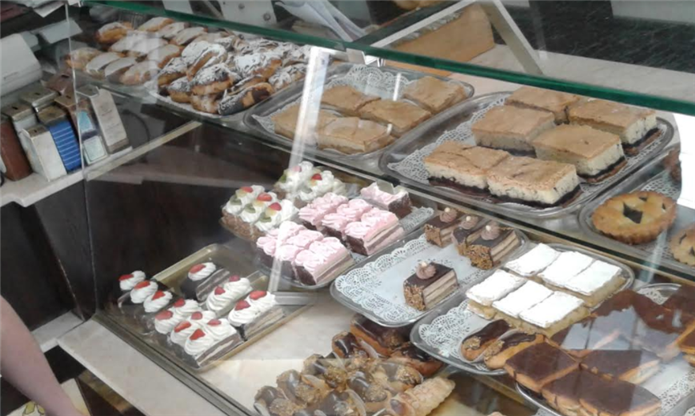 The person working there was like a few of the main characters in Fiddler on the Roof mixed together. She was explaining what we could order and it was… like a line out of the movie :p She was also the first one to know anything about Utah (“Are you Mormon?” she asked), because she is from the Bronx. “Why did you move here?” “The great matchmaker” she said, nodding up to the sky. It was really delightful to chat with her about the neighborhood, and her Jewish faith (“a lot of laws!”). She explained what kosher is, the killing of animals, never eating pork, etc. and then said “just look it up on the internet!”

She recommended a park a couple of minutes down the road, and we were off again, pastries in hand, to eat and relax while we were waiting for the hotel to get our rooms ready. The town really is delightful, and the history and architecture is amazing. Here’s a cool decoration that became functional with the addition of a doorbell button, right in the kisser: 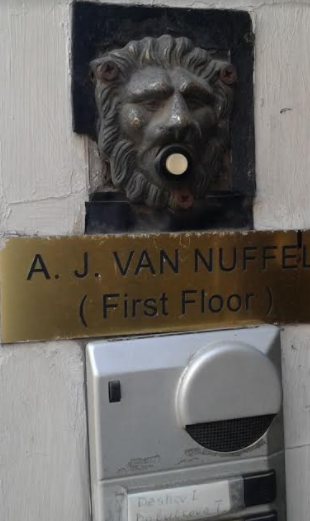 The park was really quite delightful, and there were a bunch of people there… from kids (we were right by the cool playground, see pic below) to groups of young adults. I’m not sure what the groups were doing (there was one group of … 13 – 15 year olds? They were playing games, kind of like Red Rover, but it was “steal the red shirt before someone else does,” and another group of 20 something year olds who were in some kind of class (in English) sitting around in a circle for at least an hour).

In this playground picture I like how the design is all aged… like something you’d find in a pirate kids playground – old, warped wood. Neat design :p 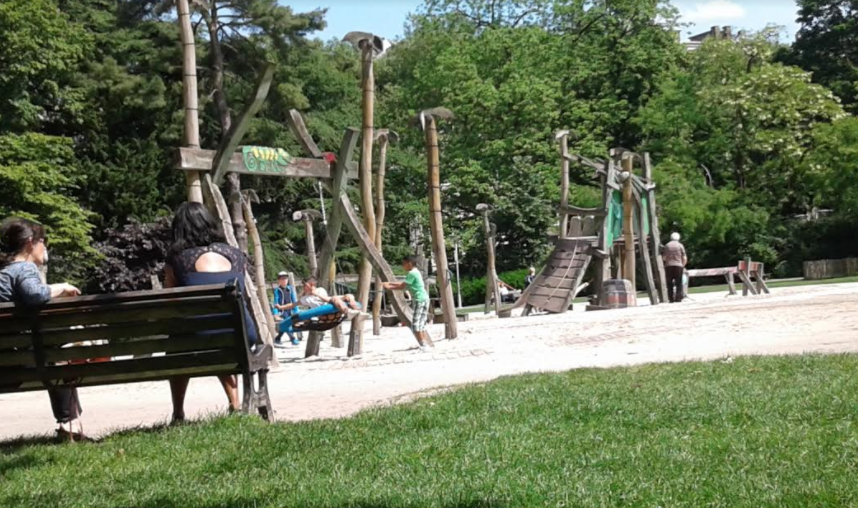 The companeros fell asleep and I walked around the lake (well, I started to, it turned out to never end, so I just doubled back), and then then we headed back to the hotel (just a few blocks away). We were just in time to check in, and then I hung out in the hotel room working on my presentation #1 (on LinkedIn) while the kids did their own things for a few hours: they explored the town and hung out in the other room (apparently taking pictures of themselves with fruit they bought at the corner store that evening – I have no pictures of that :p).

Got to bed late, with only 7 or so hours of sleep before my pesky alarm would wake me up and make me wish I had finished my powerpoint last week :p

It seemed to be a lazy, relaxing day, but after writing all of this it turns out we got a lot in 🙂 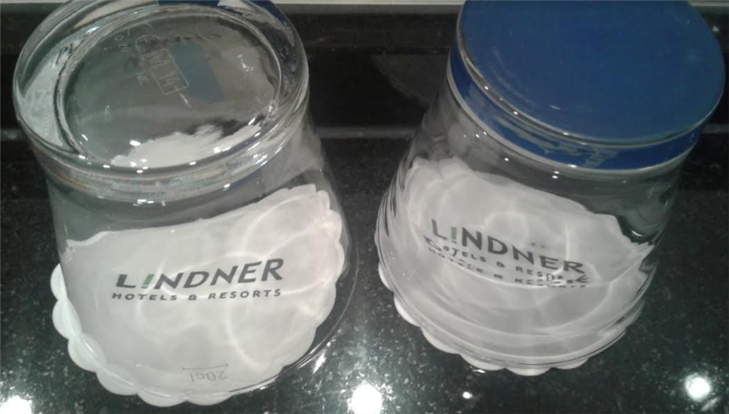